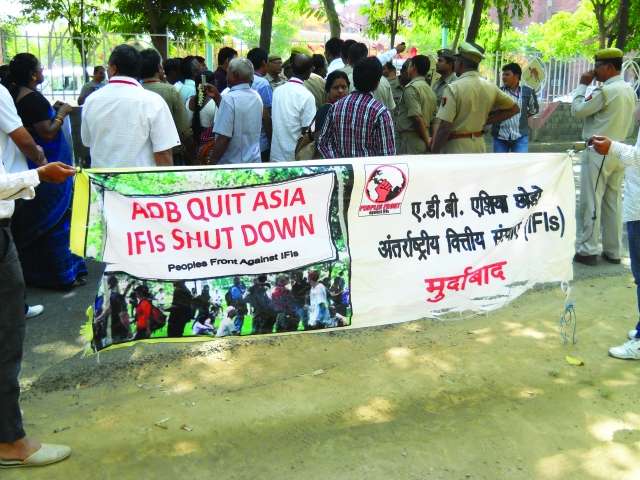 The Indian Prime Minister Manmohan Singh’s in his speech[1] at the Inaugural Session of the 46th AGM of the Asian Development Bank (ADB) held from 2nd to 5th May in Greater Noida, Delhi said“India has set itself a target of over 8% annual growth in our Twelfth Five Year Plan, which runs from 2012 to 2017. This is the rate of growth that the country achieved over the past decade. We are initiating measures to spur investment and to make India more attractive to investors both at home and abroad.”

Peddling the growth story on one hand and also attempting to placate the common person, he further says “Both India and the ADB have a strong commitment to a common agenda in making the growth processes more inclusive and sustainable. I sincerely believe that this is not just a social and political imperative, but also a sound economic underpinning for sustained long term growth. Therefore, we place special emphasis on livelihood security, food security, healthcare, education, skill development and on clean and renewable energy”.

At this juncture, he clearly makes a plea to the ADB to continue increasing their investment in the country. Close by another group is making a call which loudly says ‘ADB Quit India, ADB Quit Asia’. This is the People’s Front against International Financial Institutions (IFIs) which is a conglomeration of people’s movements, mass organizations, struggle groups, trade unions, community organizations, policy think tanks in India, Asia and the world fighting against the anti-people development policies and prescriptions of the ADB. The People’s Front against IFIs rejects and struggles against all IFIs whose primary missions are to appropriate and commodify the natural, human and social wealth of the planet, and force nations into indebtedness and political subordination.

At one end, there is increasing focus on investments, with India getting a loan of about $6 billion from the ADB over the next three years for various projects.[2] India has been ADB’s largest borrower in the period 2010-12, wherein the India portfolio included 78 sovereign loans amounting to 11.2 billion dollars in December 2012[3]. The Indian government has stressed the need for adequate investments in sectors such as health, primary and higher education, skill development, as well as industrial sectors that can provide gainful employment. These investments require timely access to capital. As investments in infrastructure are inherently long-term, and the private sector continues to be risk averse in many cases, infrastructure financing and investment should be prioritized. For this reason, ADB’s investments are welcomed with much enthusiasm by the government. Additionally, the Strategy 2020 of the ADB focuses on private sector development and explicitly advocates private sector participation in ADB and borrower operations[4]. In 2011, the Bank spent nearly $6 billion as private sector finance. Although it is the governments who borrow, the price of debt repayment falls on the people of the country, in terms of less spending on essential services such as education, health, housing, water, sanitation, electricity and job-creation.

At the other end, there are people’s movements who have been fighting against ADBs policies which have led to land and water grabbing, forced evictions, anti-people laws, farmers suicides and environmental destruction. The 46th ADB AGM has hence provided an opportunity for these movements to show their resistance against the ADB. A four day long protest programme (2nd-5th May 2013) titled ‘ADB Quit India and Asia’, was organised by the Peoples Front Against IFIs at the YWCA, Greater Noida. It saw a participation of around 300 people representing struggles, movements and campaigns against ADB funded projects from West Bengal, Chhattisgarh, Odisha, Tamil Nadu, Kerala, Karnataka, Gujarat, Maharashtra, Jharkhand, Jammu & Kashmir, Himachal Pradesh, and the North Eastern States. ‘Go back ADB, India does not want you’, was the slogan that resonated during the three days of the AGM while agitating protestors rallied facing resistance from the police and administration.

The nexus between multilateral credit rating agencies, international Banks and various governments was raised in the protest meeting. All the groups agreed on the fact that workers in the unorganised sector are unprotected against processes and programmes formulated by the governments as dictated by the IFIs. The ‘financialisation of nature’ was another threat where an economic value on ecological services is already being put leading to them being traded in the open market. A revolutionary alternative was proposed by all affected people across countries, like Public-Public Partnership, which is both participative and inclusive to challenge the PPP model being thrust upon them by the IFIs.

The ADB declares in its mission to reduce and eradicate poverty, however, this ‘noble’ mission has failed to be pro-people as evident in the large number of struggles and protests across the country. It proposes to achieve its goal through policy dialogues, loans, grants, technical assistance and knowledge sharing. All these are intended towards exerting endless influence on the government and its people. Also, in the ADB Charter, there is no effective mechanism in sight for the people to seek an enforcement of any of its provisions[5]. Hence, one wonders where the scope for accountability and transparency in the ADB is. One must not forget the importance of people’s struggles as validated in the protest meeting by Justice Rajinder Sachar who said that “in most clear terms it is neither the government nor legislations that can bring about any substantial change in the present scenario. On the contrary it is only peoples’ movements that can unmask the connivance within this vicious circle.”

[4] ‘Our Planet is not for Sale! ADB Quit India! Quit Asia!’, Peoples Front against IFIs (pamphlet)

In memory of Smitu Kothari