WHERE DO WE GO FROM HERE? THE BALI MEETING, AND THE LESSONS LEARNED

*This article has been edited because
we are unable to reproduce graphs in the email version of Focus on
Trade. For the full text click here

It's important, this time, to draw
conclusions, and to do so publicly. Because Bali has taken us —
barely and painfully — over a line and into a new and even more
difficult level in the climate game we'll be playing for the rest of
our lives. In fact, it's not too much to say that, with the
realizations of the last year and their culmination at the 13th
Conference of Parties, the game has, finally, belatedly, begun in
earnest.

First up, we knew going into Bali that
if the old routine continued without variation, we'd really be in
trouble. The timing of this meeting alone made this clear. Here we
were, after the skeptics, after the IPCC's Fourth Assessment Report,
after Gore's (and the IPCC's) Nobel Prize. We know now how grave the
situation is. So it's with great relief that I'm able to say that,
judging at least by Bali, the game has indeed changed — except, of
course, for the United States.

The most important change was that the
G77, the South's negotiating bloc, did not put its unity above all
else. This unity was always easy to understand, for the South is weak
and the G77's members know all too well that when they don't hang
together they hang separately. But it's been clear for years now that
the G77's unity can itself be a terrible problem, one that allowed
its most retrograde members (the Saudis come to mind) to override the
interests of weaker parties (like, for example, the Alliance of Small
Island States). So Bali, the COP where China, South Africa, and
Brazil stepped forward to announce their willingness to take on
binding "commitments or actions," was a real breakthrough,
not least because the attached condition — "measurable,
reportable and verifiable" assistance from the industrialized to
the developing countries — was so widely understood as being both
just and inevitable.

Not that we didn't already know that,
without southern support for rapid action, there won't be any. But
the G77's "flexibility" gave us a different kind of
knowledge, concrete knowledge of a deal made and a way forward. While
it didn't change everything, it changed a great deal.

Second, there's the matter of money.
Money for adaptation. Money for technology transfer. Money for
capacity building, and money, most of all, for development, which
must go on, albeit in new ways, even in this climate constrained and
otherwise strained world. We knew about the money, too, of course.
How could we not? But not like we know it today, when the need for
rapid global emissions cuts of at least 50 percent has, as Bali made
absolutely clear, become the consensus position.

Case in point: Nicolas Stern, who only
a few days before the Bush delegation's humiliation at Saturday
morning's overtime plenary heartened the attendees of a small, poorly
attended side event by telling them that the rich countries would
have to not only make sharp domestic reductions, but would also have
to finance parallel reductions in the developing world. This because,
as he put it in a published commentary called "now the rich must
pay," "even a minimal view of equity demands that the rich
countries' reductions should be at least 80% — either made directly
or purchased." Moreover, and significantly, Stern went out of
his way to note that the needed financing would not result from a
regime in which equal per-capita emissions rights were taken as
proxies for the necessary rich-world financial commitments.
"Contraction and Convergence," he said, is "a very
weak equity principle," and something stronger would be needed.

Third, Bali saw the long-overdue
encounter between the climate movement and the global justice
movement finally pass beyond its scattered preliminaries. These are
still early days, of course — for a quick review of how things
played out in Bali see Walden Bello's article below — but it's
already clear that neither movement will ever be the same. Even
mainline climate folks talk often about equity now, and this is new.
Moreover, they do so even though they fear its implications, which,
frankly, they're right to do: Taken seriously, climate equity has the
potential to raise the stakes visibly and dangerously high, so high
that both our politicians and our populations would tend to balk.
That's all the more reason to admire the ground crossed, because
fewer and fewer people within the climate movement can imagine a
future without justice, and for the most part they do not wish to
try.

Nor will the greens be the only ones
transformed by this encounter. Global justice activists will also
have to shed old skins for larger, more capacious frameworks and
approaches. There's much to say here, but the key is that a "radical"
movement — which has, to this point, made its mark by exposing the
charade of the Clean Development Mechanism and then going on to
oppose all market mechanisms — is now visibly confronting a larger
challenge in which mere opposition is not enough. If it would speak
effectively for the poor and the vulnerable, then it must find a
larger frame. The question now is motion, very rapid motion, and if
false solutions are a terrible danger, so too is the illusion that by
exposing that danger we have done all we must, all that we are called
upon to do.

This too was clear at Bali. Or so at
least it seems so in the final statement of the grassroots groups
that joined together in a "Solidarity Village" near the
Bali conference center. That statement says that, "By climate
justice, we understand that countries and sectors that have
contributed the most to the climate crisis — the rich countries and
transnational corporations of the North — must pay the cost of
ensuring that all peoples and future generations can live in a
healthy and just world, respecting the ecological limits of the
planet."

In any case, global emissions must
peak, and very soon. In the face of the astonishing arrogance and
duplicity of the Bush administration, the final Bali Action Plan
(http://unfccc.int/meetings/cop_13/items/4049.php)
did not make this explicitly clear, but there are at least clear
references to the Fourth Assessment Report, and they will do.
Everyone knows what they mean. If we're to bend the emissions curves
as we will need to, we'll have to start soon, and we'll have to
create new understandings and institutions as we go. It's not enough
to oppose false solutions. We need real ones.

So Bali was perhaps as great a success
as could be expected under the shadow of today's Washington. The
negotiations are go, and we shall fight another day. And we'll do so
within a framework that — by the insistence of the G77! — calls for
measurable, verifiable, and monitorable progress on finance and
technology. To be sure, this is not a concrete success. Bali did not
lay out national obligations, or even a global target, and its
outcome is easy to criticize. I could do it myself, no problem. But
the truth is that Bali was never going to lay out the details, or
even a comprehensive framework. And it did manage to lay down the
challenges, to be faced again in the real battle, the one that will
be fought in two years time. Bali is all that was possible, and it's
enough.

Moreover, we are wiser now — and,
hopefully, more ready for the coming rounds. They will be vicious
indeed. And I must add that, from here on out, they will not be won
with frameworks and good intentions. We now need to step beyond the
conditions of possibility of a fair and viable global accord, and
spell out the thing itself.

When we get down to cases, we'll have
no choice but to face the details of an extremely daunting reality.
Fortunately, Bali brought good news on this front as well. Not just
the fact that, a few skeptical dead-enders notwithstanding, the
threat was taken all around as justifying emergency action. But also
that, at least as far as I could tell, people were ready, if not
actually eager, to connect the dots.

Those dots do not lay out a pretty
picture.  The truth is more than inconvenient.  It's
shocking, even terrifying.  Because what the science tells us is
that we're going to have to get this right, and soon.  And what
the politics tell us is that the battle of 2009 will be a real
doozy.  And there will be no way to win it without both trust
and technology, and both of them on a grand scale. And before we get
either we'll need breakthroughs in financing and, of course, burden
sharing. And we'll also need to step outside the climate negotiations
to fight for "policy coherence," in which the institutions
of trade and investment are brought quickly into line with the
imperatives of the climate regime.

And we'll need justice. For without it
there will not be cooperation, or solidarity. And without global
solidarity, we will fail.

* Tom Athanasiou is executive director
of EcoEquity, a research and advocacy organization dedicated to the
promotion of a just and adequate solution to the climate crisis.
http://www.ecoequity.org/
This commentary was first published in Grist: Environmental News and
Commentary ©2007. Grist Magazine, Inc. All rights reserved.
Gloom and doom with a sense of humor®. 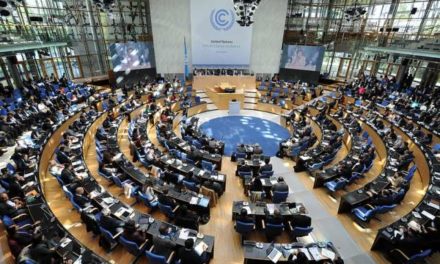 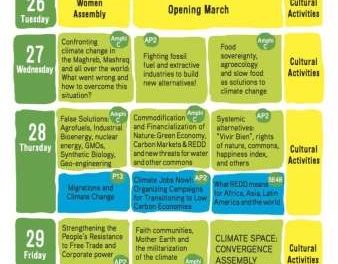 Programme of the Climate Space 2013 at the Word Social Forum

Kyoto Protocol : the ball is with Villar 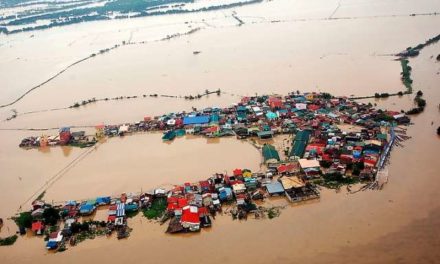