Veolia in Asia-Pacific: five reasons why you should challenge Veolia 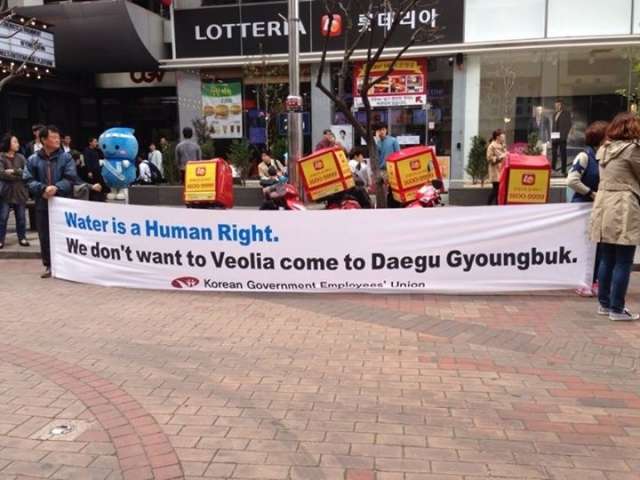 As the 7th World Water Forum kicks off in Daegu, South Korea, civil society organizations and international allies have gathered in the city for an Alternative Forum-Water for All in Korea on April 13-14.

The French multinational water giant,Veolia Environnement is seeking to grow its business in the country through a potential contract in Daegu. Focus on the Global South has put together a primer- Veolia in Asia-Pacific: five reasons why you should challenge Veolia.

1.     Alarming trend: Veolia, a French multinational, aims for global domination in the fields of water, waste management and energy

Veolia Environnement is a French multinational company that provides a full range of environmental management services in the fields of water, waste management (collection, pipe systems maintenance, urban cleaning services and waste-flow management, as well as waste treatment and recycling), energy (except trading, production and sale) and transportation in 67 countries covering nearly 163 million people. Veolia was originally part of Vivendi (previously Generale des Eaux), which ran into serious financial and debt troubles after its expansion into media, film, telecommunications, music and book publishing.[i]

Dubbed as a water baron, Veolia is one of the twin global giants that dominates the market in water and wastewater management; the other is Suez. In 2013, it reported €22.3 B in revenue, which is 1.8% less than the previous year at constant scope and exchange rates; while its financial debt decreased to € 8.2 B compared to € 10.8B in 2012. Veolia has varied clientele ranging from individuals to municipalities, to industries andbusiness. Itemploys 202,800 workers around the world.[ii]

Europe is still Veolia’s traditional market, with half of its business operating  in France,  UK, Germany, Central and Eastern Europe, and the rest of the continent. Outside of the region, Asia Pacific (including Australia and New Zealand) makes up 9.1%, followed by North America (8.5%), Africa and the Middle East (3.9%) and South America (1.1%).

Owing to the economic crisis in Italy, North Africa and the US, Veolia suffered a net loss in its revenues. For this reason, in 2011, the company announced a corporate overhaul that included divestitures, restructuring and a geographical scale back.

The result of its so-called transformation is a new brand and slogan: “resourcing the world is what we do”[iii]. The ‘transformed’ company capitalized on the climate crisis, resource scarcity, new development challenges such as urbanization, as well as  emerging opportunities in food, mining, oil and gas, toxic pollution clean-up and other raw material recovery, and environmental services. Employing a sustainable development coordinator, its 2013 Annual and Sustainability Report can be mistaken as any civil society or UN document in the sense that the New Veolia talks about “designing and implementing solutions aimed at improving access to resources while at the same time protecting and renewing those same resources”[iv]. This is a significant shift as the French multinational now talks about (a) creating high added value, (b) addressing environmental requirements, economic and social concerns and (c) a circular economy where water, wastewater and energy are interconnected. Its Chief Operating Officer François Bertreau further adds that “The new Veolia is more customer-focused, better equipped to deal with the specific characteristics of its markets and structured to make even more progress.”[v]

The company’s new strategy is now three-fold: target the most promising environmental markets, i.e. those that are supported by strong demand and solvent clients and where it has a distinctive competitive edge; increase business with industrial customers; and focus on the most dynamic countries and regions.

It also streamlined its organization—integrated its operations, established a single Veolia in each country, and set up regional management teams. A new department was created—Innovation and Markets–which aims to create new business for the New Veolia, for instance transforming a client’s waste into energy for another. In 2013, this New Veolia won new contracts—half from the traditional markets and the remaining half in emerging economies and fast growing regions.

But behind Veolia’s media-savvy, politically correct slogan and branding is the fact that the company intends to profit from various interrelated crises. It expects to win new contracts (which it has already, in 2014, it secured more than €9 Billion in new contracts) and strengthen its position in its traditional markets.

In other words: new image, new sources of profits.

In the last 10 years, Veolia’s revenues   in Asia-Pacific has grown exponentially from €391 M to €2.0261  these largely came from contracts in the water sector.  The growth is expected as the French company has looked at China and Australia as niche and main ‘markets’ outside of Europe. It has contracts in Australia, Bangladesh, China, India, Japan, Malaysia, New Zealand, Philippines, Singapore, Taiwan, South Korea, Sri Lanka and Vietnam.

In 1997, Veolia won its first management contract in the city of Tianjin. China has been seen as a main market by Veolia in terms of industrial and municipal clientele. Overall, the company is responsible for the water supply of more than 17 municipalities, autonomous regions and special administrative regions including Chengdu, Beijing, Nangchang, Shenzen and Tianjin comprising a population of about 43 million people.[vi]  In Shanghai-Pudong, Shanghai’s business district and a leading economic and financial center in Asia and the world, Veolia with the Pudong Water Corporation are managing Pudong’s entire water service for 4 million people under a Private-Public Partnership (PPP) contract since 2005. The contract is a first in China—with Veolia producing 1.5 million cubic meters of water daily.  It also provides water supply in the four districts of Lanzhou province, serving 2.4 million people.[vii]

In 2012, Veolia won three separate contracts—two in the capital city of New Delhi and one in the city of Nagpur, state of Maharashtra. On March 2012, Orange City Water Limited (OCWL), a joint venture between Veolia and an Indian company, was awarded a 25-year Private-Public Partnership under the Nagpur Municipal Corporation’s ambitious Jawarhalal Nehru National Urban Renewal Mission to operate and maintain the city’s entire water network.

On November 12, 2012, Veolia entered into a joint venture with Swach Environment and won a 15-year contract to manage western New Delhi’s drinking water, production and distribution as well as the management of the water department. Earlier in May of that year, Veolia was awarded a 13-year contract by the city, worth US$ 54 million, to build and operate a new wastewater treatment plant that will serve New Delhi’s west zone.[viii]

Veolia has been active in Japan since 2002. It manages numerous contracts throughout the country, which covers 3 million people for wastewater services alone. Further, it has water service management contacts in the cities of Tokyo, Kyoto (2012 contract) and Osaka, where the company serves 25 million people or 20% of the country’s population.[ix]

But in 2013, Veolia was awarded its first comprehensive public service management contract in the archipelago, in the tourist town of Hakone known for its hotsprings or okone. The US$13 B, 5-year contract covers the complete management of water services in the districts of Midono, Italy and Shinanogi, where there are raw water resources, treatment plants, and distributions networks.  As the only multinational operating under this model in Japan, Veolia will produce 20,000m3 of water each day, serve 6,200 people, and operate 3 plants and 7 pumping stations. The company sees this as an opening to secure more contracts in the prefecture where 9 million people are residing.

Veolia has been present in South Korea since 2001. On March 2001, Veolia entered into a joint venture with Hundai Construction in the state of Chilgok and was awarded a build-operate-transfer contract for the operation of 2 existing wastewater treatment plants over the next 23 years as well as the design, financing and construction of a new plant.[xi]

In December 2001, Veolia was awarded by the municipality of Incheon a 20-year build, operate and transfer (BOT) contract to run two wastewater treatment plants in Songdo and Mansu areas. Veolia Korea partnered with Samsung Engineering (80-20 partnership). This was the first BOT contract by a South Korean municipality in the water sector. The construction of the two plants took 30 months, which have a total capacity of 100,000 cubic meters per day.

More recently, Veolia Korea has won a 10-year contract to supply steam to Hongwon Paper Manufacturing, one of the major paper and pulp companies in the country. Amounting to €150 million, this is the first energy services contract for Veolia in South Korea.

These examples show how Asia has become an important market for Veolia. More than a decade ago, the company has less water business in the whole Asia-Pacific than Africa and Latin America. With the growth in the region and more countries liberalizing their water sectors, Veolia was able to also grow its business, win more contracts and therefore, expand its presence.

Veolia Asia has suffered a number of scandals and controversies in its water operations in the region. This can be summed up to price hikes, irregularities in the bidding process, bad performance in terms of meeting promised targets, inefficiencies, and tap water pollution.

In 1995, the city of Adelaide signed a US$ 1.5 billion contract with United Water, a joint venture of Veolia and Thames Water. The contract handed over the waterworks of the city to the company. But irregularities in the bidding process  led to government investigations and parliamentary inquiry. Over the next years of the  company’s operation, basic water rates rose to 59% and workers lost their jobs.[xii]

In Nagpur, India, Orange City Water Limited, a joint venture between Veolia and Vishwaraj Environment, an Indian infrastructure company, has failed to deliver on its promises of infrastructure improvements and 24/7 uninterrupted water service. Instead, “low-income residents have endured multiple project delays, inequitable water distribution and service shutdowns.”[xiii] Protests from residents on contract violations and obligations and allegations of corruption have compelled city officials to conduct investigations and public hearings.  Under OCWL’s operations, two-third of Nagpur’s water was also lost with no clear explanations—that’s 432 million liters each day[xiv] enough to provide for the basic water needs of 8.64 million people per day.

In China, various cases of tap water pollution have been reported by Chinese civil society groups such as Globalization Monitor in Hong Kong. The company was involved in 13 water pollution case since 2007 in different cities around the country, including Shanghai, Beijing, Qingdao, Zhuhai, Haikou, Urumqi and Lanzhou.[xv] In the northwestern Chinese city of Lanzhou, province of Gansu, a high level of benzene was found in tap water—200 mg per liter, which is 20 times higher than the country’s national safety limits of 10 mg per liter. Later on, local authorities attributed this to the crude oil leaking from Veolia’s pipeline, which affected 2.4 million people. Similarly, Shanghai Pudong Veolia Water Co. Ltd.,  ironically hailed as a success story, was fined by the Chinese government for violating waste pollution prevention measures and for discharging sewage beyond the allowed limit in the first quarter of 2013. In Qingdao, Veolia’s Maidao sewage treatment plant was found to contain excessive levels of fecal coliform similar to the case of its plant in Haikou.[xvi]

Research groups such as Public Services International Research Unit has documented at least two contracts that were cancelled in China (Xian Water in 2002) and Malaysia (Selangor’s BOT contract to operate 26 water treatment plants). Two more proposals were abandoned—one in Taiwan where negotiations on a water treatment plant failed and in the Philippines (Cebu), where opposition by the local water union compelled Veolia’s local partner to drop its unsolicited BOT proposal.[xvii]

* Mary Ann Manahan is a program officer with Focus on the Global South-Philippines. She works on the commons—land and water, social, gender, and environmental justice issues. She maybe reached at [email protected].

This piece was originally written as a submission for the Stop Veolia Seattle Zine. For more info and if you want to support the Zine, please visit https://stopveoliaseattle.wordpress.com/

All in the Family:Musical Chairs in the Neo-liberal Establishment