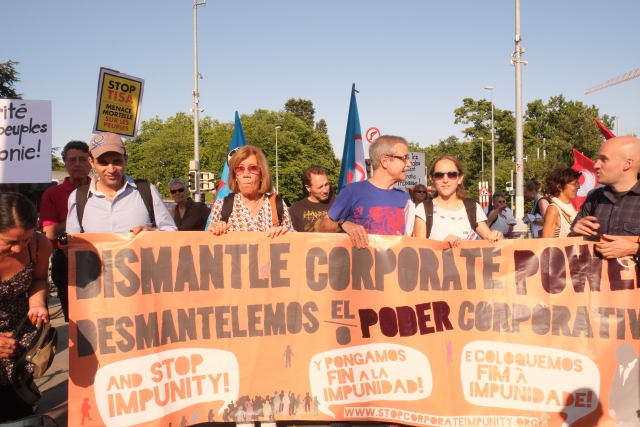 July 10, 2015, Geneva – Dozens of organizations and social movements mobilized this week in Geneva to send a strong message to the United Nations Human Rights Council, to urge them to take action against corporate impunity. The negotiation of a binding instrument on Transnational Corporations (TNCs) and Human Rights is an unmatched opportunity to provide access to justice to victims of corporate human rights abuses.

The Global Campaign to Dismantle Corporate Power – a coalition of 190 social movements, networks and organizations from around the world – organized a week of mobilizations along with the Treaty Alliance and Swiss social movements. Several activities were held inside and outside of the Palais des Nations, in order to give publicity to this effort and let States know that the people are watching and will not allow this process to be derailed by TNCs or the States they captured.

In addition to taking action inside the UNHRC meetings, through numerous interventions to the Intergovernmental Working Group, the Campaign organized a weeklong occupation of the Place des Nations with popular discussions on the abuses of power by TNCs and the need of a treaty to redress them. The main demands of the campaign are based on an 8 points submission to the IGWG, which was built from the recommendations and demands of victims, affected communities, social movements and other civil society organizations from every corner of the world.

In her intervention to the IGWG, Rosiane Mendes, an affected by the operations of Brazilian mining company Vale from the community Santa Rita, Estado de Maranhao (Brasil), emphasized the need for a treaty by saying that “we have no means or mechanisms for access to justice or to reclaim our rights, so we must look to other organizations and movements to report the facts and to present our proposals to the states, which must hear the voices of the people and not corporations.”

The opportunity to speak about TNCs violations inside the UNHRC is an historic advance, although the behavior of certain states during this process still raise concerns. The Campaign cannot but regret that home states of most TNCs showed no interest in discussing binding human rights norms for TNCs. While Canada, the United States and Norway were absent from all sessions, the European Union (EU) attempted to derail the process during the IGWG’s opening session by objecting to the agenda for the meeting and demanding a modification of the mandate of IGWG established in UN Human Rights Resolution 26/9. The blocking tactics caused an impasse that was finally overcome when it became clear there was no consensus from participating States to adopt the EU’s proposal.

In response to the EU’s maneuvers, Brid Brennan of the Transnational Institute and the Global Campaign to Dismantle Corporate Power and Stop Impunity stated that “as civil society organizations and social movements, present here at the UN, we protest the disruptive behavior of the EU, and we challenge its member states to declare their position on this matter. The wellbeing of millions of people globally who have endured systematic corporate violations of their human rights depend on the IGWG to be able to continue and to fulfill its mandate, despite the EU’s actions.”

The position of powerful states is also a democratic issue. As Podemos MEP Lola Sánchez stated at the outset of the session, “The EU is working more as an ambassador of big corporations than a defender of international human rights law. A clear example of this disturbing position is the proposed Transatlantic Trade and Investment Partnership between the U.S. and Europe that could contain an investment protection agreement that will give economic interests primacy over human rights.”

Now that the session concluded with the adoption of a first report we have to prepare for next steps. “States should now continue meaningful intercessional consultation, particularly with people affected by TNC abuses, to ensure real progress in the next round of negotiations,” continued Brid Brennan, underlining the importance of encouraging and involving states in this process to end the corporate impunity and build strong mechanisms to enforce human rights. 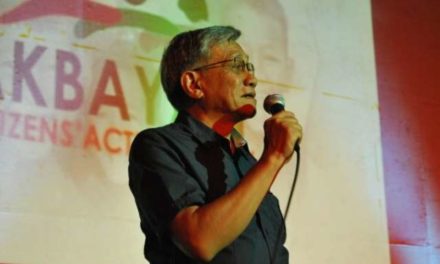