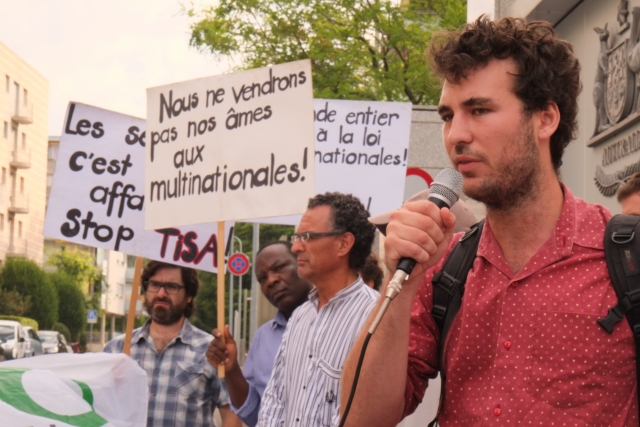 Text and photo by Joseph Purgganan

Groups led by Geneva-based campaign against the Trade in Services Agreement (TISA) held a picket today in front of the Australian Permanent Mission in Geneva where the TISA negotiations are being held.

The secret talks comes in the wake of the publication of Wikileaks over the last few days of chapters and annexes of the TISA text under negotiation.

Joseph Purugganan of Focus on the Global South expressed solidarity from Asia and the Philippines to the TISA campaign.  “Asia continues to be a region of high growth yet access to essential public services particularly for poor communities continues to be a major problem.  We see TISA as part of the arsenal that includes new generation FTAs like TPP,  and the EU FTAs, that erodes peoples rights, heighten inequality, and institutionalizes the corporate agenda in economic policies.”

Sam Cossar Gilbert of Friends of the Earth Australia lamented the fact that the Australian Government is leading these secret negotiations.