ADB and World Bank, Quit Asia! Quit India!
Mobilise against the Asian Development Bank Annual Governors’ Meeting
3-6 May 2006 Hyderabad
The Asian Development Bank (ADB) is the third largest source of development finance in the Asia-Pacific region, next to the World Bank Group and the Japanese Government. Every year, ADB moves huge amounts of money across the Asia-Pacific region in a bid to foster rapid economic growth and market capitalism. In 2004, the ADB’s total lending was US $ 5.3 billion which was used to promote 64 projects covering mostly road transport, communications, energy, law, economic management in the public policy sectors. Private sector assistance was to the tune of US $ 807.2 million. The ADB’s largest borrowers in 2004 were China and India, each receiving US $ 1.3 billion, about 24 per cent of the total lending. India is the fourth largest shareholder in the ADB overall.
Despite its name, the management and operations of the ADB are greatly influenced by the USA and the non-Asian capitalist powers. Although, Japan enjoys the most powerful status in the ADB, at par with the USA, the non-Asians are powerful enough to manipulate the institution’s directions to suit their own interests. In promoting privatisation and private sector investments, the ADB routinely dole out lucrative contracts to favour international firms and consultants.

The ADB is an extremely secretive, non-transparent and unaccountable institution, despite its rhetoric on good governance. Its founding Charter of Principles provides the bank and its staff with immunity from local and national laws. The ADB is thus not legally liable to communities, governments or individuals for any wrongdoing, material harm or violation of rights.
Evaluation of ADB projects by independent researchers, citizen’s groups, movements, NGOs and by its own Operations Evaluation Department indicate that most ADB supported projects are poorly designed implemented and managed. ADB does not facilitate public participation in development planning and access to information while weakening local and national governance through undemocratic, non-transparent and non-consultative methods of project implementation. ADB projects have continued to displace hundreds of thousands of people across the region with little or no compensation, have resulted in negative environmental and social impacts. The ADB, is therefore, charged with creating “development refugees” and “manufacturing poverty” by the civil society organisations and movements.

The ADB, like the World Bank, has become the custodian of private investment and the promoter and protector of corporate interests and profits. It follows the neo-liberal policy by imposing policy conditionalities – the reform agenda and privatisation – on borrowing countries, and facilitates foreign companies to grab contracts for research work, consultancy, project development, construction and management.

The ADB, in its Country Strategy and Programme (CSP) for India, 2003-2006, claims that the 10th Plan strategy is a sound one and is similar to its own poverty reduction strategy founded on pro-poor growth, social development and good governance. India’s strategy seems to fit well with the Banks! The CSP further says that the most important role that India’s development partners can play is in introducing international best practices to strengthen fiscal and other structural reforms in the 10th Plan. The Indian Government is playing second fiddle by indicating that it looks to ADB, to play a leading catalytic role in supporting the next generation of policy reforms. Since India can no longer access concessional loans from ADB, high risk loans at market rates are taken for sectors focusing on high growth, reforms and private sector development.

During current CSP period, the ADB loans, starting from US $ 1.67 billion in 2003 is slated to increase to US $ 2.05 billion in 2006, totaling US $ 7.5 billion. Projects financed by the ADB range from energy and power sector reform and restructuring to road transport, water, irrigation, flood control, tourism, urban development and administrative and fiscal reform. These projects are located across Jammu & Kashmir, Uttaranchal, West Bengal and the North East, to Madhya Pradesh, Chhattisgarh, Gujarat, Rajasthan, Karnataka and Kerala. The ADB’s array of policy conditions include, a) adopting legislations and regulations that favour private sector involvement in key sectors, b) market-friendly restructuring, c) corporatisation and privatisation of public enterprises and utilities, d) creating a flexible labour force, e) commercialization of agriculture and f) trade and investment liberalization.

Mobilising against the Annual Governors’ Meeting

The ADB is holding its 39th Annual Governors’ Meeting (AGM) from 3-6 May 2006 in Hyderabad.in the State of Andhra Pradesh in southern India The Governors are the highest level of decision makers in the ADB. Appointed by the ADB member countries, they are high-ranking national officials such as Finance Ministers or Secretaries of National Treasuries. The current Chair of the AGM is Indian Finance Minister P Chidambaram. Since 2000, peoples’ movements, communities affected by the ADB projects, progressive academics, intellectuals, labour unions, activists and NGOs have used this opportunity to successfully mobilise themselves at the AGM venues and protest against the institution and its development policies.
In 2000 and 2001, the ADB was shocked by the intensity of protests and strong messages sent to the ADB by peoples’ movements in Thailand and the US. The last AGM was in Turkey in 2005 where local movements and organisations lent great support to the project affected and protest organisations that gathered for the AGM.

In 2006, the eyes of the movements and struggles in Asia will be on Hyderabad and India. Peoples’ struggles against destructive development and oppressive economic and political structures are legendary in India and particularly in Andhra Pradesh. Andhra Pradesh does not have any ADB supported projects, but it is already a victim of the World Bank conditionalities – the power sector workers, the road transport workers, the displaced tribals and the rural poor. In the recent past, the people of Hyderabad and Andhra Pradesh gave a befitting reply to the Chandrababu Naidu Government that tried to foist a World Bank dictated reform agenda. Thousands have marched in the streets of the city calling for a rejection of the World Bank’s AP economic restructuring loans. The Government that refused to listen to its people was comprehensively voted out of power. The present Government, unfortunately, continues on the same path, eager to bring in foreign investment at any cost.

The Hyderabad AGM offers us the opportunity to work with the groups in Andhra Pradesh; movements, communities, organisations and activists in India and across Asia should come together and raise a collective and unified voice against neo-liberalism. Whether through World Bank or ADB projects, the net impacts on communities and societies are the same, especially on the rural and urban poor, workers, agrarian communities, dalits, tribals, women, peasants, fishworkers, hawkers and slum dwellers.
Come May 2006, let us give the ADB, the World Bank and all the other corporates who covet India’s resources and wealth, encroach upon the sovereignty of countries across the globe and in Asia, a unified message: 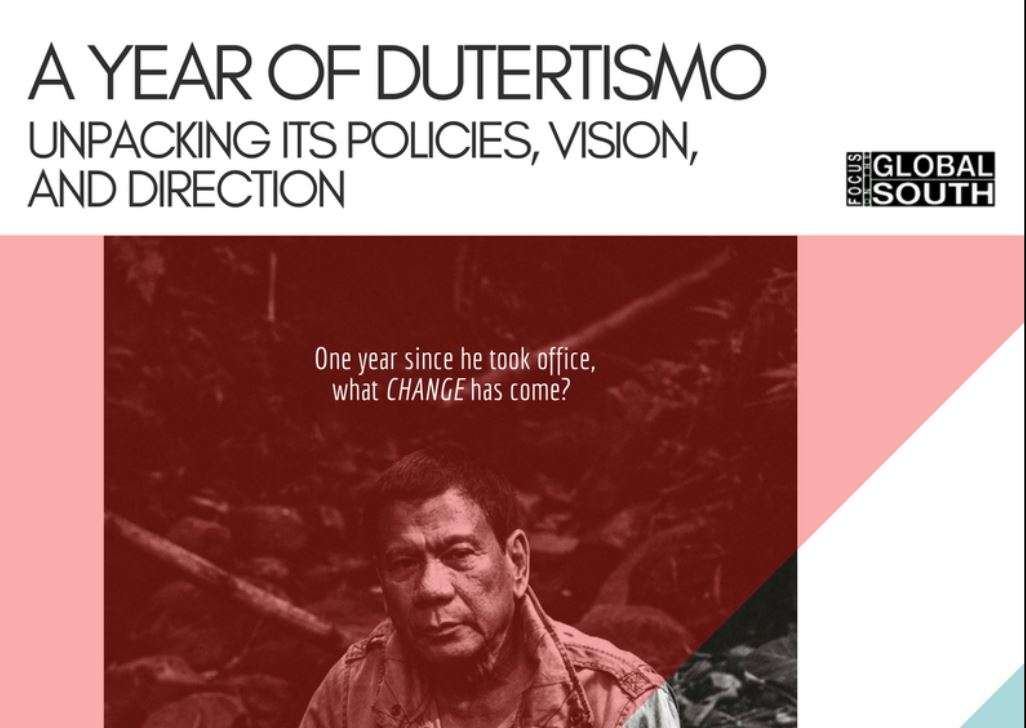 Presentations: A Year of Dutertismo, Unpacking its Policies, Vision, and Direction