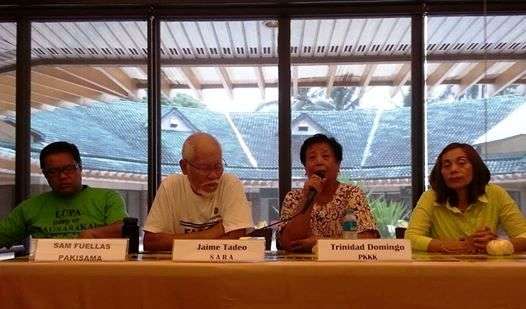 Quezon City, Philippines, 3 June 2014 — With less than a month left before the deadline for land distribution under the Comprehensive Agrarian Reform Program (CARP), farmers’ groups in the Philippines are taking unprecedented measures to ensure that the agrarian program does not die a whimpering death, announcing on Tuesday plans for a massive gathering that promises to be the largest of its kind in 27 years.

Friday’s event — the broadest assembly of farmers’ groups since the historic Congress for a Peoples’ Agrarian Reform (CPAR) in 1987 — aims to shore up multi-sectoral support for reestablishing land reform as a key item in the national development agenda and help develop a collective platform of actions and policy proposals for addressing the agrarian reform impasse under President Benigno Aquino.

Jaime Tadeo, SARA spokesperson and a former 1986 Constitutional Commissioner, said: “This upcoming June 6, 18 national federations of farmers’ organizations will be meeting to discuss the present of CARP, and hopefully reunite around a common agenda for pushing for the continuity and completion of land distribution within the Aquino administration. This gathering of farmers’ coalitions will be all the more important given that DAR, the very agency mandated to champion and protect the rights and interests of small farmers, has abjectly failed to deliver throughout the present administration.”

Only 28 days remain before DAR’s window for issuing Notices-of-Coverage (NOC’s) on all private lands still targeted for redistribution closes, but signs suggest it will miss the deadline by a great margin.

According to DAR’s official figures, more than 206,000 hectares still had to be granted NOC’s as of last February 2014.

A March 3 position paper submitted by DAR to the Congressional Oversight Committee on Agrarian Reform stated: “it is possible that some landholdings will not be issued NOC’s by 30 June 2014.”

Trinidad Domingo, president of the Pambansang Koalisyon ng Kababaihan sa Kananyunan (PKKK), said Tuesday: “Hundreds of thousands of farmers are now in danger of being denied the lands that have been promised to them by President Aquino in his 2012 State of the Nation Address, because of the consistently-dismal record of DAR over the past years. As we can no longer place hopes on DAR to fulfill its mandate, we are now trying to unify as much of the farmers’ movement as we can in order to prevent the worst-case scenario for CARP from materializing.”

“We have all lost complete faith in the DAR leadership, and are now appealing to Malacanang to release a directive that will allow land reform to continue past June 30, while spearheading an overhaul of the DAR bureaucracy. It is time for President Aquino to become directly involved in the implementation of CARP, if he truly wishes to bring ‘inclusive growth’ to the rural poor,” Domingo asserted.

The peasant federations invited to the People’s Agrarian Reform Congress include:

The Congress takes place on June 6, 2014, from 9:30 a.m. onwards at the Asian Studies Center of the University of the Philippines Diliman (Hall of Wisdom, GT-Toyota Asian Center, Katipunan Ave, Quezon City). Organized by 28 organizations, the event brings together farmers with representatives from labor unions, the urban poor, women’s groups, student groups, academia, religious organizations, civil society groups, and Philippine social movements in a collective effort to emphasize that agrarian reform is not only a farmers’ issue, but a national issue.