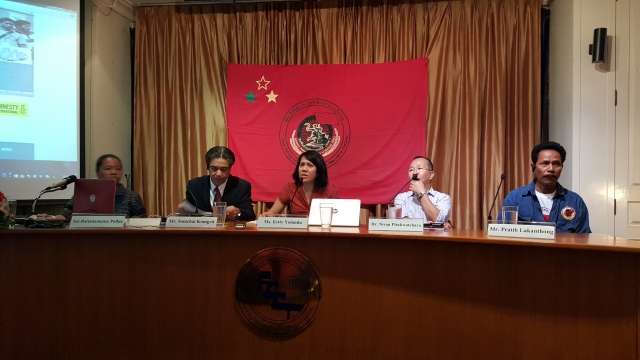 When we attempted to investigate landholding of the rich, the result was we have been prosecuted and tried in the Court. We were then sentenced to jail and were held liable to pay damages to the rich.

When we declared that land mist belong to those who till it with their labour, the result was we have been summoned for ‘attitude adjustment’.

When we insisted of having the right and access to land and the management of all resources in society, the result was laws have been invoked to mete out measures to forcibly evict us from the land.

When we collectively pushed away the rich and asked for the right to land, the results was some of us have been killed by bullets.

Being born poor, the fight for justice is what keeps us continue to breathe. From the past until present, the fighters for the rights and human dignity, as a farmer and a worker, one after another, have shed their lives to fill in the path toward our dreams, the path lining up toward our freedom and equality.

Since its inception in 2008, the Southern Peasants Federation (SPF) has lost at least four of our comrades; all of them were murdered simply because of their struggles to demand the right to agricultural land including;

These are the people who lived their frustrated lives and died in pain for the sake of their children and neighbors who continue to be persecuted by the invoking of the Constitution’s Section 44 (if the proposal of the Agricultural Land Reform Office is endorsed by the Prime Minister).

On one hand, death has set free our fighters for the rights of the poor. It has removed them from the chain of poverty and all the repressions. But it has failed to ensure that powers that be are held accountable to provide for the rights and freedoms of people based on equality.

On the other, it reminds all the knowledgeable persons of the remaining structural violence permeated in Thai society. It clearly points to the fact that the power to manage natural resources and social capital continues to concentrate among the handful of elitist families, 10 or 15 of them only.

Under the current structure of power and natural resource distribution, the human rights defenders and the fighters for social justice are still vulnerable to persecution and murder as well as enforced disappearance. Many communities are slated to be removed to pave the way for the special economic zones, industrial projects, power plants, petroleum exploration, and land confiscation for industrial crops including oil palm.

The Southern Peasants Federation (SPF) is a social movement of the landless workers who eke out their living in agricultural sector which is subjected to monopolistic capitalism and the undemocratic political rule. For us, ‘social justice’ looks for bleak. It looks too unrealistic. But we are left with no other choice, but to stay united and to demand the right to agricultural land based on the collective land ownership system as a community or an agricultural institute. And we have the right to form our group and agricultural community, the right to set up our new community (after our traditional communities have been destroyed and dismantled by the capitalism and the individualistic land management). And we retain the right to live an independent life bestowed with food sovereignty and security.

Amidst the fight for rights and freedoms and for a better life, the poor and the landless peasants have to confront two major challenges including;

First, we are subjected to the whim of the powers that be who at their discretion enforce the law discriminatively against us. Such practice has led to social injustices and double standards. For example, when the Southern Peasants Federation (SPF) applied for the lease of the land under the charge of the Agricultural Land Reform Office, our applications have always been rejected. Worse, the authority has even proposed to the PM to invoke Section 44 of the Constitution of the Kingdom of Thailand (Interim), B.E. 2557 (2014) to forcibly evict us from the land and the community. Meanwhile, the rich investors including Thai Boonthong Co., a big investor in oil palm plantation are allowed to occupy as many as 1,114 rai of land under the Agricultural Land Reform Office since 1994, and insofar, the authority has not taken any legal action against the company. Or the case of Pansri Co. which has applied to lease 13,000 rai of land from the Royal Forestry Department (RFD) and despite the contract has expired in early January 2015, but in April the same year, the Provincial Governor of Suratthani gave permission to the company to continue using the land and to collect any produce from the land (including palm fruits, of course). This is just a few examples as to how the mismanagement of natural resources by the authorities has led to the deadly confrontation.

Second, extrajudicial power and illicit power have been used by the investors in collaboration with corrupt government officers and local and national politicians to continue their exploitation illegally. When their scams are exposed by the investigation of the community, they retorted that by threatening to kill us and this has led to the murders of our members of the SPF as aforementioned. This was a clear example of impact from the current structure of power and vested interest which stand above the law and above social scrutiny. In other word, such a power relationship has led to the use of violence informally to control and to suppress people who dare to rise up to demand investigation or to contend the monopolistic power of the rich which has been made possible by support from certain government officials and others who benefit from the scheme.

“Land” is the core issue of the struggle; for the poor, it is a means for our survival, but for the rich, it does not just serve the purpose, but it also serves their speculative purpose and their wealth accumulation.

“Land” is a struggle for vested interest, a class struggle between the rich and the poor, the lower class and the bourgeoisie, since the amount of landholding can directly affect their economic status.

“Land” is thus an issue involving class struggle in all nations and is an issue for struggle that has lasted the longest in human history.

It is a struggle with our lives at stake and the “fight-till-death struggle for land” has emerged in all over the world and has been led by people from all walks of life. They all want to develop their production potential; they all want to have power to self-determination.

The government must consider all the impacts prudently and comprehensively and see how the invoking of Section 44 will affect the poor or how they can address the need for rights and freedom of the people. They should concern themselves with meting our measures to protect the human rights defenders. They should not just glorify themselves with the ruling power or to boast their power among the nations. But they have to concentrate on returning the rights and freedoms to the persons who truly own them, the people.

Otherwise, the “fight-till-death struggle for land” shall continue and with a critical mass, it will trigger a bigger change.

With our collective mind and our frustration with the repression, the class struggle and with our desperate situation and the shrinking political space, we remain united to fight for the transformation in the near future.

From quantity, it must evolve to quality and this is the truth.

Declared at the Foreign Correspondent Club of Thailand (FCCT)

What happens when you run a country like a corporation: A primer on Thailand’s political crisis 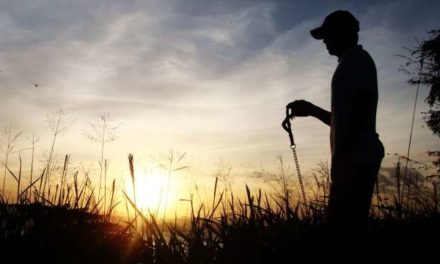 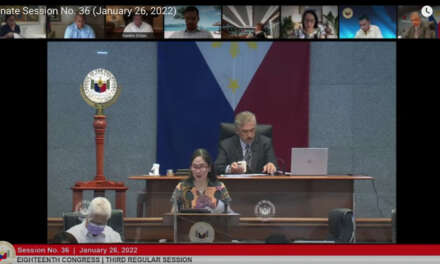