The People's Forum on Asian Development Bank, a coalition of Japanese civil society organisations and groups from across Asia, was inaugurated with a public symposium at the Doshisha University here today. Over 300 representatives from the student community, worker's and women's groups, and NGOs participated in the event that put the spotlight on the adverse impacts of the ADB in Asia. The Forum is the people's counter to the ongoing 40th Annual Governors Meeting of the ADB being held at Kyoto International Convention Center (KICC).

"Even though Japan does not borrow money from the Bank, its role is key and Japanese citizens should be aware of its impacts in Asia," said Yuki Tanabe from the Japan Center for a Sustainable Environment and Society. Japan is the biggest donor in the ADB with a 15.7 % share of capital subscription.

Lidy Nacpil from Jubilee South based in the Philippines underscored Tanabe's point. "The people of Japan should know that Japanese money is being used for projects that are harmful and promote privatisation policies that benefit corporations especially in sectors such as energy and water,"added Nacpil. She emphasized the need for groups from across Asia to work in solidarity with the Japanese people to stop the farce being played out in the name of development of the poor.

Earlier in the day, activists organised a panel discussion on ADB and water privatisation in the NGO center at KICC. They challenged the Bank to a debate. Unfortunately, the ADB official failed to show up.

Speaking at the panel, Vidya Dinker from the NGO Task Force on ADB from Mangalore in India said, "The ADB official being absent from today's interaction is reflective of the Bank's general attitude of not caring about the impacts of their projects. Quick loan disbursement, full cost recovery for services, pushing high cost consultancies and undermining local democratic institutions in the push for privatisation is the agenda of the ADB."

Hemantha Withanage from NGO Forum on ADB spoke about the ADB's External Water Panel report and showed how it had a clear corporate bias. "The panel report considerably promotes public private partnerships and recommends that the ADB becomes a market maker for the private sector," he added.

Immediately after the workshop, the controversial Eminent Persons Group (EPG) report 'Towards a new Asian Development Bank in a new Asia' was discussed in a showpiece seminar at the KICC. The EPG was commissioned by President Kuroda in June 2006. This is chaired by Supachai Panitchpakdi, Secretary General of the United Nations Conference on Trade and Development (UNCTAD). The EPG is part of the ongoing long-term strategic review of the ADB.

Speaking at the seminar, Kuroda commended the EPG for its vision of a new ADB and called it an excellent starting point for the ADB to change direction.

"The EPG is an attempt to get a bunch of neo-liberal academics and corporate leaders to write a sophisticated report that will provide legitimacy for the ADB to push full steam ahead on its privatisation and regional integration agenda," said Benny Kuruvilla of Focus on the Global South, a policy analysis organisation based in Asia. The report makes several far-reaching recommendations to the ADB; more public private partnerships, support more conducive policy frameworks, promote the development of regional financial markets and regional integration through trade and investment liberalisation.

"Despite some well sounding rhetoric like 'all inclusive growth' and 'environmental sustainability',the report demonstrates the commitment of the ADB to policies that undermine democracy, promote privatisation and further corporate globalisation",added Wilfred D'Costa of the Indian Social Action

Forum, a network of over 600 activist groups in India. "The ADB will hasten its demise if it takes the path recommended by the EPG," he concluded.

Later activists took out a rally in Kyoto against ADB and its destructive policies. 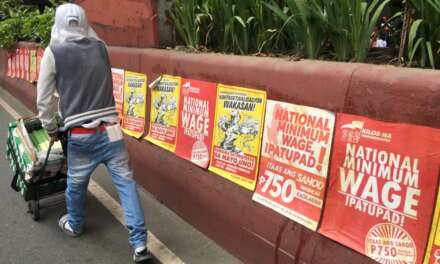 Precarious Road Ahead: The Continuing Struggle of Workers against Contractualization in the Philippines