Farmers, fisherfolk, union members, women’s groups and other civil movements joined force on the International Day of Protest against GATS and Privatization, to demand WTO members to stop trading their services at the expense of people. Meanwhile inside the Convention Centre evil Santa was handing out gifts of water, education and health care to multinational corporations. 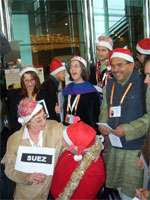 The protest divided itself into several smaller groups and marched its way to the consulates of India, Philippines, Korea, Japan, United States, European Union, Brazil, and Indonesia.  Each group carried GATS-Free notices, demanding these countries free GATS from the WTO negotiations.

In the current Ministerial, the negotiations on services in GATS is now in serious crisis for developing countries as developed countries are calling on them to make commitments on services before agriculture proposals will be revised.  However, with any agreements on services under this current setting, developing countries will lose much of their policy flexibility and the pace of liberalization could speeded up as a result of the adoption of a new modality of liberalization. 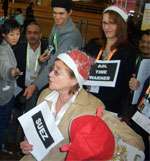 GATS, No to GATS, Our World is not for Sale, A better world is possible, Together we’ll not fail.