GENEVA, May 12 (IPS) – The high food prices that have sparked riots in many parts of the developing world — from Indonesia, India and Bangladesh to Cameroon, Cote d’Ivoire and Haiti — should come as no surprise. These are only the latest in a series of events many developing countries have suffered as a result of opening their borders and neglecting domestic agriculture.

A large number of developing countries have conscientiously implemented World Bank and International Monetary Fund (IMF) conditions and World Trade Organisation (WTO) commitments. They have applied the given structural adjustment policies — and have seen the damaging consequences to their domestic agricultural sector.

The consequence has been the certain erosion of their capacity to produce their own food.

In the era of stronger state control in the 1970s and even the early 1980s, domestic food markets in the developing world were often in the hands of state marketing boards and cooperatives. Marketing boards would guarantee floor prices, and provide fertilisers and seeds. They also controlled import volumes, redistributed food where there were production shortfalls, and purchased commodities from cooperatives.

These marketing boards were not always run in the best possible way; there were many instances of corruption or inefficiency, but they did fulfill certain critical functions. Farmers were provided a market to sell their produce to, which meant they had a livelihood. Prices were stable even though they were often lower than what farmers would have liked.

As a result of these policies, many developing countries were either net food exporters, or at least were nearly food self-sufficient.

All that has changed over the last 20 years. Investment support to farmers was done away with. Small farmers were told to produce for the international market, and their markets were opened to producers from outside. Rather than supporting staple crops, government support went to the export sector. Since all would specialise in the products where they had ‘comparative advantage’, gains were supposed to accrue all round.

But rather than producing winners, millions of the poorest subsistence farmers were knocked out of their own markets. Imports took over what was previously produced by local people. Over the last 20 years, the production capacity in many countries has severely diminished.

The Philippines has been one prime example of such policies. “During the 60s and 70s, we were self-sufficient,” Jowen Berber of Centro Saka, an NGO working on agrarian issues with farmers, told IPS. “That was the time that the government was heavily investing in rice — irrigation, infrastructure, marketing support and production support such as credits and inputs. But when the government stopped those incentives and subsidies, rice production slowly decreased.”

Berber said “the acreage of irrigated land has also been falling because the government has not been maintaining irrigation facilities. We also have a very high level of post- harvest losses in rice — up to 35 percent because our post-harvest facilities are very old.”

Instead of supporting farmers with guaranteed prices as before, Berber said “the government now intervenes to buy less than 1 percent of the domestic rice that is produced. They are buying more imported rice than our own local rice.”

A study on import surges by David Pingpoh and Joean Senahoun, commissioned by the UN’s Food and Agriculture Organisation (FAO) in 2006, noted that the Cameroon government support to the rice sector was removed in 1994 through implementation of IMF and World Bank policies. The fertiliser market was privatised. Rice yields of poor farmers dropped as fertilisers became unaffordable. Tariffs were liberalised, and annual rice imports doubled from 152,000 tonnes to 301,000 tonnes between 1999 and 2004.

This opening rendered the country vulnerable to the policies of other countries. At the time, India was de-stocking its rice surplus, and rice imports from India increased from 7,900 tonnes in 2001 to 60,300 tonnes in 2002. As a result of this import surge, rice farmers were hard hit, and many left the sector. Land for rice cultivation dropped 31.2 percent between 1999 and 2004.

According to the FAO, Cote d’Ivoire also saw imports flooding in when the market was opened up. As a result of implementing commitments at the WTO, Cote d’Ivoire removed import restrictions on key agricultural goods, particularly rice. Duty on all agricultural products was set at a maximum of 15 percent, except for 25 tariff lines.

As a result, rice imports increased at an annual rate of 6 percent from 470,000 tonnes to 715,000 tonnes between 1997 and 2004. Imports were mainly from Thailand, China and India. Domestic production dropped 40 percent over this period.

In Nepal, the civil society organisation ActionAid documents that rice import surges came in 1994, 1996 and 2000, with imports increasing by 175 percent, 55 percent and 800 percent respectively. From 24,500 tonnes imported in 1999, by the year 2000 imports had hit 195,000 tonnes. The porous borders between Nepal and India, and the Nepal-India Trade Treaty were widely seen as the cause of these surges. In certain areas of Nepal, domestic prices fell by nearly 20 percent. The southern belt bordering India saw a multitude of rice plants and rice mills shutting down.

Today, in the latest twist of events, food prices have increased due to global shortfalls. Food production has been redirected towards biofuel production. Drought in Australia has contributed to shortages on the world market. Speculators playing on commodity markets have further increased prices.

Up to 37 countries have been gripped by protests and riots. In Cameroon, seven people were killed in the unrest in February. Food riots also took hold of Abidjan in the Cote d’Ivoire in March this year.

At meetings in Berne in Switzerland to address the global food crisis, UN Secretary- General Ban Ki-Moon, World Bank president Robert Zollick and WTO director-general Pascal Lamy again made a plea for more free trade the panacea. But farmers remain unconvinced that more of the same policies that have contributed to the last two decades of destruction of agriculture can help.

Reacting to the push by the WTO leadership, the World Bank and the UN to stitch up the Doha Round so that further liberalisation can assist in resolving the food crisis, Henri Saragih, international coordinator of the global network of peasant farmers La Via Campesina writes, “Protecting food has become a crime under free trade rules. Protectionism has become a dirty word. Meanwhile, countries have become addicted to cheap food imports, and now that prices are shooting up, hunger is raising its ugly head.”

* Aileen Kwa is a Geneva-based policy analyst, presently on leave from Focus on the Global South. This article was first published by IPS, 12 May 2008, http://www.ipsnews.net/news.asp?idnews=42325 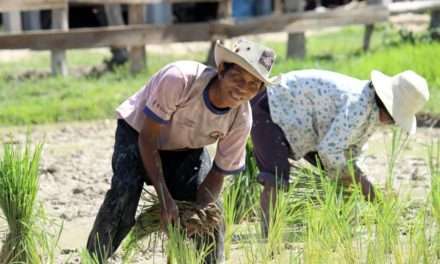 Solidarity with Those Who Feed the World