The illegitimacy of the Hong Kong deal. Hong Kong marks a historic change in the dynamics of the WTO and global trade politics. Attempts by the US, EU and Director General Pascal Lamy to re-legitimize a discredited institution by bringing Brazil and India into the elite club of power brokers have partially succeeded. Focus on the Global South, along with several civil society groups that closely monitored the ministerial, is shocked and outraged at the way concerns of a majority of the membership was systematically silenced. As is the norm in the WTO many of the key decisions at Hong Kong were taken in green rooms where dissenting countries were kept out.

As the leaders of the G20, Brazil and India, addressed a press conference to legitimise the deal they helped cobble together, farmers on whose behalf they claim to be negotiating were languishing in jail with no access to warm clothes, food or legal channels. 866 protesters were finally released this morning, leaving behind a further 14 who have been charged with ‘unlawful assembly’. It is not clear why certain individuals have been singled out, particularly considering that the whole group were detained whilst peacefully and lawfully protesting together.

As we sign off from Hong Kong we belive the movement against the WTO will intensify in the coming years. We will continue to work with groups locally and internationally to expose the illegitimacy of this institution and reverse the spread of the free trade policies it trumpets in the name of the global south.

Focus on the Global South team

PROTESTERS REMAIN IN PRISON WITH LITTLE CONTACT, FOOD OR HEALTH CARE – A VIOLATION OF RIGHTS

The Ministerial Declaration text can be found at
http://www.tradeobservatory.org/library.cfm?refid=78081 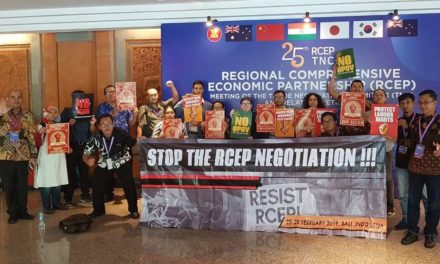