Reject the Doha Round!
Call to Action

We, representatives of peasant organizations, women, migrants, workers, urban and rural poor, fisherfolks, social movements and civil society organizations from East and Southeast Asia call for the rejection of the Doha Round.

We condemn and urgently call the attention of others to the attempts to conclude the Doha “Development” Round through a Mini-Ministerial in Geneva this July 21-26, 2008. This informal meeting to be convened by WTO Director General Pascal Lamy will begin July 21 and last for up to one week. Only around 30 trade ministers were invited to take part in this informal and exclusive phase of negotiations with unfair and imbalanced texts as the basis for the talks.
The current texts show that the ambitious agenda to open up markets for agricultural and industrial goods, and services and not development and flexibilities for developing countries has become the core element of these negotiations. The texts continue to reflect the intransigence of developed countries to give in on demands for reduction of farms subsidies on the one hand and their aggressive push for substantive market access in goods and services on the other hand.  The major concessions given for the sake of the Doha round have consistently been made by developing countries.
We reiterate our call to end the Doha Round and reject all attempts to revive it, knowing that in the three major areas of negotiations – agriculture, NAMA and services – the majority of proposals under discussion are designed to protect and promote the interests of the rich countries and transnational corporations.
Lamy along with the leaders of the World Bank and IMF are pushing for the conclusion of the Doha Round as the solution to the current global crisis of rising food prices. This is yet another false claim as years of trade liberalization have shown that promises of development are empty.
Doha is the problem, not the solution. Further trade liberalization and forcing open of markets in the developing countries will leave them even more vulnerable to not only the food price crisis but also the financial crisis. If the current texts are agreed to and the Round is concluded, this will foreclose any chance for development for developing countries.
We call on our governments to reject the attempts to conclude the Doha “Development” Round, at the expense of the people.
We commit to mobilize at the national, regional and international levels to stop the revival of the Doha “Development” Round from July 21 to July 26, 2008. We call on other movements, peoples’ organizations and civil society groups to join us in our struggle.
Globalize hope, globalize the struggle!


To sign on to this statement, please email: [email protected] 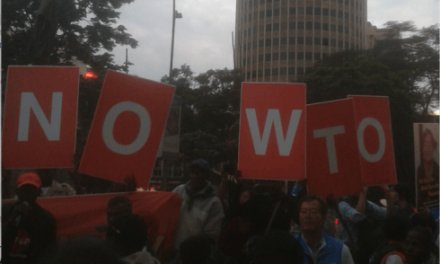