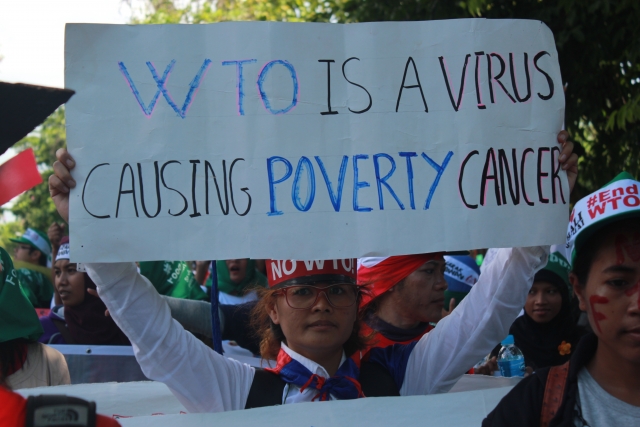 December 3, Bali, Indonesia—The opening of the 9th Ministerial Conference of the World Trade Organization was met with colorful and creative actions inside and outside the session halls of Nusa Dua, where the multilateral trade institution is holding its talks. In the morning, about 2,000 representatives from the #EndWTO movement, an alliance of more than 100 organizations and peoples movements from around the world, marched in front of the Bali’s provincial capital to demand economic justice, call for their ministers to stand by their people and an end to an institution that has caused more inequities rather than redistribution of wealth. Colorful flags and lively chanting further fired up the warm and humid Bali morning. The peaceful mobilization’s message was loud and clear: enough is enough, “Down, Down WTO”.  Or as the Indonesians would say, Lawan, Lawan WTO! [See the photo album taken by Benny Kuruvilla] http://www.flickr.com/photos/[email protected]/sets/72157638310591643/

Fight for the Right to Food

In the afternoon, at the WTO, Indian movements called on India and developing country negotiators to defend food sovereignty and reject the proposed peace clause in the agriculture talks. The peace clause is a legal mechanism inside the WTO which temporarily protects countries from any punitive action for violating any of their rules. Chants of “Peace Clause, Rest in Peace” and “Food Sovereignty, Now!” reverberated at the ministerial conference hall. [PHOTOS]  The group was joined by other civil society activists from around the world calling for the #EndWTO.  Read the Indian movements statement here: India: Defending the Poor and Hungry is Non-Negotiable (hyperlink)

On the occasion of the Ninth Ministerial Meeting of the World Trade Organisation (WTO) in Bali, Indonesia, several farmers’ organisations, trade unions, mass organisations and peoples’ campaigns resolved to support the Indian Government’s position to not trade away national food security.

The group welcomes the decision of the Indian Cabinet on 28th November to reject any peace clause that does not guarantee a permanent solution.  The peace clause has been widely opposed by the Chairs of the Parliamentary Standing Committee on Commerce and Agriculture, several political parties including the Bharatiya Janata Party and the Left parties, and mass organisations.

However, the group cautioned the Indian negotiating team headed by Commerce Minister Mr. Anand Sharma, not to bow to any pressure to weaken India’s position on defending and upholding national food security as a sovereign right. The group declared that the safeguarding and promotion of the country’s food security, rural employment and livelihoods are non-negotiable, and that food security cannot be ensured without supporting agricultural production by small and marginal farmers

The group reminds the WTO members that no country needs to be on the defensive about protecting the right to food and fighting hunger in their countries.  And that aggressively upholding the rights of its citizens is not tantamount to collapsing the ministerial talks.  On the contrary, such pressure tactics must be exposed as a conspiracy to keep people hungry and poor.

It was decided that the group would closely monitor the negotiations during the ministerial meeting to ensure that the interests of the poor and hungry are not compromised in any way.

Focus on the Global South India

The organizers of the #EndWTO Bali Week of Action held a press conference inside the WTO to deliver a clear message: now is the time to re-imagine a new global trading system. Speaking at the panel, Riza Dimanik of Indonesia’s Institute for Global Justice said, “We need to take back our rights and protect our peoples from malnutrition, poverty, and worse impacts of climate change.  To do this, we need to get out of the Bali package, which will make our economic strategy worse. The better move is not to continue the negotiations”.

The WTO has been a major vehicle in promoting free trade regime and consequently, has invaded every crucial aspect of ordinary people’s lives but especially the poor and hungry. The rural and agriculture sector in Southeast Asia has been particularly hit badly by the influx of cheap and subsidized commodities from the global North and by emerging powers such as China. Madam Yoon Geum Soon, president of the Korean Women Peasants Association and a member of the international coordinating committee of La Via Campesina, the largest peasant movement in the world, recalled that it has been 10 years since Lee Kyung Hae killed himself in Cancun, Mexico at the 5th WTO Ministerial Conference, serving as a wakeup call that indeed “WTO Kills Farmers.  “This shows the bad influence of the WTO and has failed to improve the lives of farmers. This kind of situation is not happening in Korea alone. Many areas in the world are experiencing the same thing: the decimation of the small farming sector.”, lamented Madam Yoon. Similarly, Yudvir Singh, a national-level farmer leader from the Indian Farmers Union, emphasized a similar point, “WTO is not for the small farmers and peasants. We have 700 million people still in carving a living in agriculture. It is people’s culture, their lives and not just trade.” Both leaders stressed that it is unconscionable and unthinkable to think a future without agriculture or countries without food. They further called on ministers to realize who they are negotiating for and not trade their rights and lives away.

Pablo Solon, executive director of Bangkok-based development policy research and action NGO and former ambassador of Bolivia to the UN, stressed that the “WTO had done nothing for developing countries. It’s a real shame that India has to beg to have a temporary or permanent peace clause to guarantee food security. It’s a right—there should be no agreement that prohibits a nation to secure food for its own country. The peace clause says that ‘I will not sue you for 4 years but do recognize that you are violating the rules of the WTO’. This kind of rule is unacceptable. Defending food security can never be a violation of the law”

Further, the WTO have only exacerbated inequality. “After eighteen years of WTO, we have more concentration of wealth rather than redistribution. The 2013 WTO Report states that 1 percent of the transnational companies in the US control 80 percents of the exports in the country; while only 5 companies control 80 percent of the exports in the developing world… We are here not only to say that we reject the WTO but open a new process for a new kind of multilateral institution that brings redistribution of wealth, is in harmony with nature and prioritizes life instead of free trade.”

Lidy Nacpil, the international coordinator of Jubilee South and a well-known Filipina activist, emphasized that a new global trading system is long overdue. She further “calls on for the suspension of all WTO commitments and agreements of the Philippines because of the situation of the country after typhoon Haiyan”.

The speakers at the press conference emphasized that they are not against trade but trade should be based on complementarity and not on competition; as a tool that will bring further equality not increase the gap between the rich and the poor; and take into account the interest of all working people as well as nature.  The WTO Ministerial Conference in Bali is a political opportunity to start the discussion not on the Bali package but on new ways to move forward, on a future without the WTO.#