Derailers’ Update from Bali 4-5 Dec 2013: Focus on the Global South’s daily digest of the activities at the #EndWTO Bali Week of Action 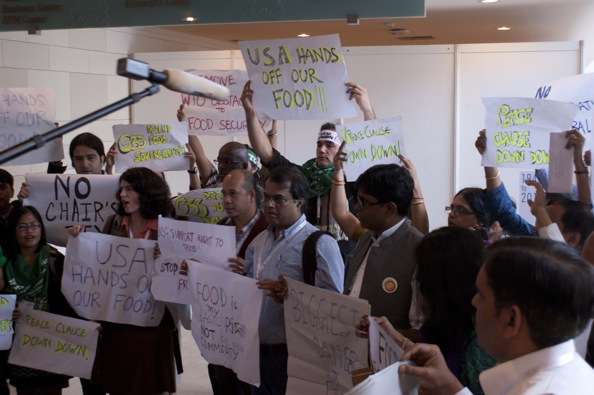 December 4-5—Civil society groups and social movements intensified their creative and symbolic actions inside and outside the Nusa Dua International Convention Center.

When one is not enough…

To the tune of Helen Reddy’s famous “I Am Woman” song, Filipino women flashmobbed for climate justice at the WTO meet in Bali. Dance and flash mob have been tools for activists, especially women, from around the world in conveying political statements and messages. Dubbed by a media representative as “one of the most fun actions in the WTO so far”, Filipinos urged the Philippine government to suspend all its commitments to the WTO and other free trade agreements in the midst of reconstruction and rehabilitation efforts caused by super typhoon Haiyan (locally named as Yolanda). With slogans of “Philippines: Defend your peoples’ interests”, “Climate Justice, Now” , and “Down, Down, WTO”, the Philippine civil society groups stressed that developing countries are bound to lose in the Bali talks as inequitable agriculture and trade deals are imminent. See the press statement here: Filipinos Flashmobbed for Climate Justice at the WTO meet in Bali

Less than an hour later, about 80 activists, civil society representatives and social movement organizations from around the world, staged an “Mic Check” chanting loudly,

“Peace clause down down/rest in peace”

“USA hands off our food”

“No negotiations in Bali”

The protest was again a reminder to the ministers and participants of the WTO talks to defend food sovereignty and protect the rights of people to food. It is expected that civil society groups and social movements will continue to remain vigilant and steadfast in their resolve to put an #EndWTO.

And the people have spoken…

Meanwhile, more than 21 kilometers away from the fancy and air-conditioned halls, the Gerak Lawan and the Social Movement for an Alternative Asia organized a full day ‘Global Peoples’ Tribunal on WTO, FTA’s, Investment and TNCs’ at the Yowana Mandala Stadium, Denpasar, Bali Indonesia. The tribunal was organized to seek local, regional and global attention to the devastating impacts of the neoliberal economic agenda, free trade; to galvanize the social movements’ strength; link the various struggles; and to collectively advance an alternative agenda of resistance and empowerment.

The Tribunal gathered testimonies from global citizens, activists, trade unions, migrants, indigenous peoples, and farmers on the negative effects of free trade in an effort to amplify the voices of the victims. Immediate actions, therefore, need to be taken to ensure protection of human rights and rights of mother earth. As they say, justice delayed is justice denied.

Broadly, the testimonies highlighted the 10 crimes of the WTO:

The proceeding of the tribunal began when the registrar introduced the Global Peoples Tribunal to the audience and read out its code of conduct and summoned the panel of five judges to hear the depositions and conduct the proceeding. The Judges include Justice Brennan (The Netherlands), Justice Saragih (Indonesia), Justice Mpofu (Ethiopia), Justice Nacpil (Philippines) and Justice Nandini (India). There was a panel of six prosecutors to present the charges against the accused who were mostly the Transnational Corporations and/or multilateral investment banks and cross-examined the victims after they made their depositions.

In the seven submissions presented from Indonesia, the charges were framed for damages and losses against the following accused, (i) the Freeport Indonesia Ltd. for systematically expanding the reach of their business, exploitation and commercialization by damaging mountains, which caused vast environmental damages and breached the rights of the indigenous people of Papua; (ii) the PAM Lyonnais Jaya Ltd. and Aetra Air Jakarta Ltd. for exploiting water resources and denying the rights  of Jakartans; (iii) the Japan Bank for International Cooperation (JBIC) for Donggi Senoro Liquid Natural Gas Ltd (DSLNG) for causing environmental and ecosystem destruction; (iv) Large number of Coal corporations as well as Mayor of Samanrinda for causing environmental  damages to the commons in Dayas; (v) the Charoen Pokphand Indonesia Ltd for breaching the rights of fish farmers of Lampung; (vi) Monsanto and other manufacturing corporations of pesticides for dumping toxic in the fields of farmers and causing environmental damages.

Besides the above testimonies, a number of depositions were made by Indonesians and foreign citizens against WTO and TNCs. These included the deposition on WTO designed to dismantle the social role of state and to re-assert the role of corporations; on WTO kills cotton farmers in India; on WTO and FTAs denies access to health and medicines in Thailand; on WTO denies right to food sovereignty in South Korea; and Trade agreements and WTO regimes increasing the criminalization of migrants.  At the end of the tribunal the judges announced their judgment indicting the free trade regimes, especially the WTO and the TNCs for crimes against humanity and nature. 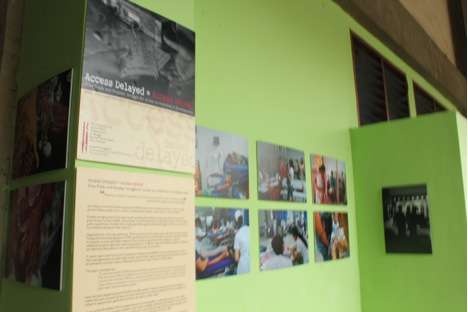 The case against the WTO and FTAs over public health and access to medicines was amplified through the testimony of Supatra Nacapew, Chairperson of the Thai NGO Coalition on AIDS and a member of FTA Watch.  At the Peoples’ Tribunal, Supatra asserted that “since the inclusion of intellectual property rights WTO rules, the impacts on people’s access to medicine have accumulated and have become more and more severe.  The only aim of IPR on medicines is to sustain corporate monopolization over essential means to save life.  Corporate patents on have made prices of essential medicine too high preventing patients from accessing life-saving medicines and treatment.  Lives have been lost all over the world because of the corporate control over medicines.    Currently corporations are pushing for even tighter IPR regime under the FTA and TPPA negotiations.   We see this control over right to life of people a serious crime against humanity.”

Outside the halls of the Tribunal, large photographs depicting the state of public health and the struggle for access to medicines across Southeast Asia donned the walls of the Gor Yowana Mandala. The images are part of the campaign spearheaded by the EU-ASEAN FTA Network called “Access Delayed=Access Denied: FTA and Peoples Struggle for Access to Medicines in Southeast Asia.”  The exhibit note reads:

“Despite the high growth in the region, health spending remains dismal representing less than 4 percent of gross domestic product (GDP). Given inadequate public support, patients rely largely on their own pockets to buy medicines and pay for their treatment.

Negotiations for free trade agreements  (FTA) launched by the European Union with Asian countries and the Transpacific Partnership Agreement (TPPA) spearheaded by the United States in particular will make it harder for patients to access affordable medicines. These ambitious agreements have pushed for restrictive intellectual property rights that would extend patents on medicines, delay the availability of generic medicines, and effectively deny patients in dire need of life-saving drugs and treatment.”

A World Without the WTO

The #EndWTO call continued to resonate inside the Nusa Dua Convention Center as Gerak Lawan and the Social Movement for an Alternative Asia organized a forum on the ‘Failure of the WTO and alternatives from the People for Economic Justice.’ A number of speakers spoke about concrete alternatives that are already happening on the ground, as well as alternative paradigms and perspectives being pushed by social movements. Cindy Wiesner from Grassroots Global Justice in the US spoke about their campaigns and movement-building based efforts to organize and build new economic institutions from the bottom up as part of a larger political struggle to regain control of the economy and to see to it that resources are made available to support grassroots alternatives.

From Japan we heard from Yoshitaka Mashima of NOUMINREN, the Japan Family Farmers Movement about the long history of farmers struggle in Japan and their efforts to defend family farming from the threats posed by trade agreements like the TPP.

We also heard about new paradigms and approaches on migration and migrant labor programs from Colin Rajah of Migrants Rights International and the Global Coalition on Migration.  Yoon Geum Soon of the Korean Women Peasants Association and La Via Campesina shared their vision of an alternative society, articulating their strong push for food sovereignty and agro-ecology. Ms. Yoon also spoke about the ‘Sisters Garden Plot’ movement in Korea and their campaign to reclaim their rights to make economic decisions on what seeds to use, and what products to buy.

Riza Damanik representing Gerak Lawan, and Pablo Solon of Focus on the Global South talked about the process within Gerak Lawan and SMAA to consolidate a document that they are calling Economy For Life in our Earth Community, which outlines the substantive elements of an alternative vision that social movements are developing and consolidating.

In Memory of Lee Kyung Hae 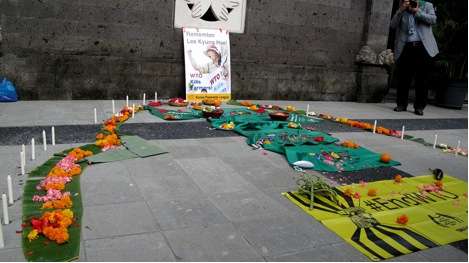 In the afternoon of the third day, La Via Campesina, the largest peasant movement in the world, lead global civil society in a poignant ceremony in memory of South Korean farmer Lee Kyung Hae who took his life at the Cancun Ministerial meeting of the WTO in September 2003.  Farmer Lee was a well-known activist who fought for the rights of the local farmers and fisherfolk of his country whose jobs were threatened by the global trading regime under the WTO. His death is a painful reminder of the destructive effects of free trade on the lives of farmers and workers.

Back at the GOR stadium, various groups organized self-events on a number of critical issues including new generation free trade agreements (FTAs), the links of climate justice, migration and economic liberalization, and Reducing Emission from Forest Degradation and Deforestation +, among other issues. There was a very lively and dynamic Women’s Assembly as well as a dialogue among Asian Parliamentarians on corporate power/#

The Stalemate in the WTO and the Crisis of the Globalist Project: Update on the World Trade Organiza