CHINA, THE WTO, AND THE ANTI-GLOBALIZATION MOVEMENT

If the organizers of the ongoing World Trade Organization ministerial chose Hong Kong as their venue because of the relative weakness of the local global justice or anti-globalization movement here, then they may be in for a major blowback. For with the political, intellectual, and personal connections now being forged between local activists and the hundreds of visitors who consider themselves part of larger worldwide movement against neo-liberal or corporate-led globalization, the WTO ministerial organizers may be unwittingly strengthening – instead of incapacitating – the global movement.

This was clear at the forum entitled “China and Globalization: What to Know about the ‘New China’ and its Importance for Global Social Justice,” organized jointly by the Bangkok-based Focus on the Global South, the San Francisco-based International Forum on Globalization (IFG), and the Hong Kong-based organizations Globalization Monitor and the Asian Regional Exchange for New Alternatives (ARENA) last December 15 at the Boys’ and Girls’ Club.  The jampacked event, which was translated from English to Mandarin and Cantonese, had to be moved to a bigger room in order to accommodate the stream of participants.

While most of the other workshops and mobilizations organized at the sidelines of the ministerial have been crowded mostly by international delegates, this one had probably the most number of Chinese participants, with some coming from the mainland and from Taiwan.

Despite or because of the abundance of literature on China these days, the subject remains poorly misunderstood, seen through myths, and still very controversial – especially in the left. The report “China Copes with Globalization: A Mixed Review,” launched by the IFG prior to the forum, debunked the many myths about this rising power. According to the report’s author Dale Jiajun Wen, a mainland-born visiting scholar at the IFG, China’s growth was achieved with massive social costs. Inequality has risen dramatically, with China’s GINI coefficient, the statistical indicator for measuring inequality, rising from a low of 0.2 in 1980 to 0.45 in 2005.

Statistics showing decreases in poverty mask how millions of Chinese have in fact become more miserable as they gained monetized wages but lost the generous social benefits such as health care, education, and social security that they previously enjoyed. Labor exploitation is also intensifying as a result of the government’s privatization of industries and sweatshop factories. Growth also comes with massive environmental damage, with China now ranking second only to the US as the world’s largest greenhouse gas emitter. Wen dedicates her research to her father and her colleagues. “They devoted themselves to build a new China,” she wrote. “They did not do it to make a few people rich.”

One of the figures of the so-called “New Left” in the mainland, Han Dequiang, was at the forum too and warned against the rising social problems in China. He pointed out that China is following short-sighted economic growth and an economic crisis, similar to the one that ravaged Thailand, Indonesia, and South Korea in 1997, may be imminent because of China’s underlying structural problems. Another speaker, Yan Hairong from the Anthropology Department of University of Illinois-Urbana Champaigne, discussed the plight of the increasing number of urban migrant workers. For many young Chinese working in the city is the preferable option, despite the exploitative conditions in the factory, than a life of uncertainty in the country-side.  But there is emerging resistance. Protests actions and clashes with the government have jumped from 58,000 incidents in 2003 to 74,000 in 2004. Au Loong Yu of the Hong Kong based Globalization Monitor pointed out that China is just one front of neoliberalisms’ global assault. He asked, “If neoliberalism is our common enemy, how are we going to oppose it?” As someone who considers himself part of Hong Kong’s pro-democracy movement – a force so strong it can mobilize up to half a million people on the streets, Au believes that the way forward is to ensure that the question of democracy and civil liberties becomes internalized in the left’s struggle for equality and social justice  — something which he said the Chinese government has failed to do.

Walden Bello of Focus on the Global South talked about many activists’ contradictory feelings towards China. “At times, China was our hope. And then it became something else. And now, it’s something we feel ambivalent about.” He pointed out that while China may have been following an export-oriented development strategy, it does not quite fit the bill of a neo-liberal state, the way many developing countries would. Because of the revolution, it is one state that has not been thoroughly permeated by imperialism and has tremendous leadership potential. But at the same time, its current development trajectory threatens many developing countries and its military ambitions worries its neighbors.
Important debates on China’s future are now happening in China, Bello said, and whether China prioritizes international solidarity, pursues ecological sustainability, and moves towards genuine democratization could well determine whether a different Asia emerges. “Our task,” Bello said, “is to help out the progressive forces win these debates.”

The mobilizations here in Hong Kong may just be the start. 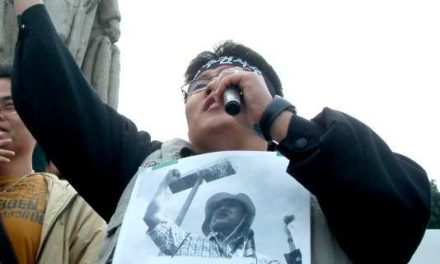