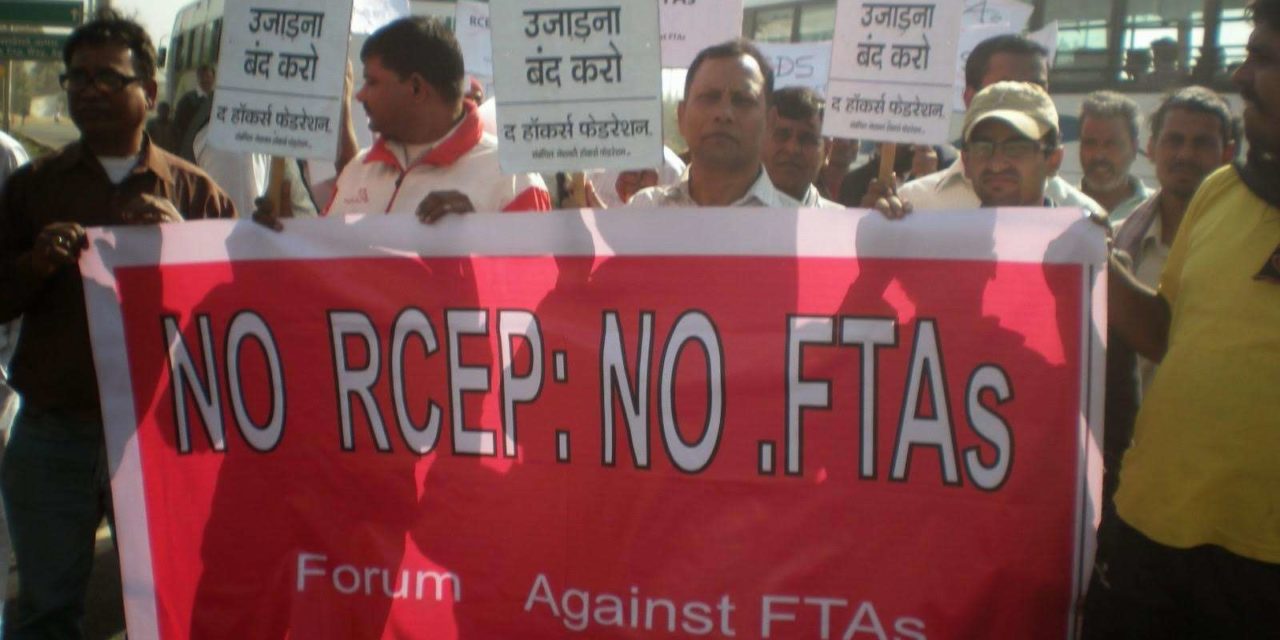 The Government of India will host the 19th trade round of the Regional Comprehensive Economic Partnership (RCEP) from 17-28 July 2017 in the city of Hyderabad. The RCEP is currently the world’s largest mega regional Free Trade Agreement (FTA) under negotiation between 16 countries in the Asia Pacific region[1]. More than 700 negotiators are expected to meet behind closed doors at the Hyderabad International Convention Centre (HICC) to further deregulate policies on agriculture, industry and the services sector in an attempt to advance free trade and foreign investment.

India is hosting the RCEP round at a time when 25 years of neoliberalism and corporate globalisation have devastated the lives and livelihoods of millions of peasants and workers across India. The agrarian crisis shows no signs of abatement as peasant suicides continue to mount. Telangana, the host state of this RCEP round is a tragic testimony to this. The manufacturing sector is witnessing the phenomenon of jobless growth and the few lakh jobs that are created each year are mostly informal, contractual and in the unorganised sector with abysmal wages and poor working conditions. In the services sector, while IT (Information Technology) growth and jobs are plateauing, the privatisation and corporatisation of essential services such as health and education have been a disaster in terms of quality, access and accountability. India’s trade deficit is reaching alarming proportions. In 2016, it was more than $ 84 billion just with RCEP countries.

Given this poor record of economic reforms, the key question is: Why is India continuing to participate at the RCEP? Will the RCEP address the agrarian crisis and create decent jobs in manufacturing and services?  Further, the RCEP is being negotiated in secret with no parliamentary scrutiny; though several components of the texts under negotiation have been ‘leaked’ online and have been analysed. The analysis indicates that the RCEP will impact critical sectors of the economy and undermine social, economic and environmental justice. It is therefore important to #BreaktheSilence of the Government and communicate the implications of the 23-plus RCEP chapters to common people.

RCEP also raises concerns about pushing ‘WTO-plus’ issues on developing countries, including binding rules in the new arena of the internet economy and e-commerce. This is when there is evidence of how existing WTO commitments in intellectual property, agriculture and foreign investment measures have adversely impacted policy space and livelihoods. RCEP also raises constitutional challenges at the state level where many of the sectors under negotiation fall under state jurisdiction.

People across the Asia-Pacific region have already felt the brunt of liberalisation through earlier trade agreements, such as the WTO, China-ASEAN FTA, India-ASEAN FTA and other FTAs. In India, we have experienced the surge of imports of oil seeds and cash crops, closure of the machinery and electronics manufacturing sector leading to loss of employment, imports of cheap steel leading to loss of production within the country, increased import dependence for production of pharmaceutical and other goods, and increased cost of medicines due to more stringent patent rules, to name a few.

As part of the people’s mobilisations against RCEP, a wide spectrum of mass movements and local groups are gathering in Hyderabad. We invite you to join us for the People’s Convention on July 23rd Sunday, public meeting and rally on July 24th Monday, and for Thematic Workshops on July 24th, 25th and 26th on issues such as Access to Medicines, Dalits and Free Trade, Public Services and RCEP, Agriculture, E-commerce, Social Security, Manufacturing Policy and WTO. The detailed Schedule of Events is given below.

Issued by: People’s Resistance Forum against FTA’s and RCEP.

For more information please get in touch with:

Public meeting (Venue to be announced)

You are requested to be part of this people’s process.

Please indicate your interest in joining, whether as a co-organiser and as participant or even as a Volunteer. Also, do share this announcement with others in your network.

RAISE YOUR VOICE AGAINST FREE TRADE AND CORPORATE GLOBALISATION