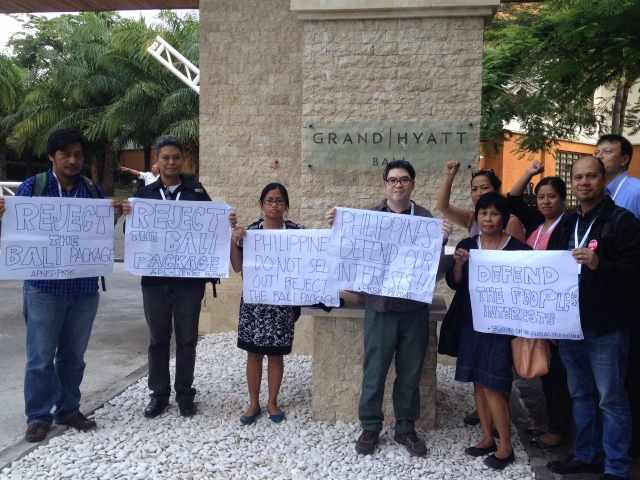 It is crunch time now in Bali.   As governments intensify their efforts to iron out the final elements of Bali deal, civil society organizations and social movements from the Philippines have stepped up their efforts to amplify the peoples’ demands in Bali.

We demand the rejection of the inequitable and unjust Bali Package. This package will not advance the interest of the Philippines to support its farmers and will undermine the efforts to attain food self-sufficiency.

This package will compel us to further open up our borders to facilitate the entry of cheap and subsidized imports from developed countries; and oblige us to institute costly trade facilitation measures that we cannot afford especially at a time when long-term rehabilitation efforts are underway in the wake of the devastation caused by super typhoon Yolanda/Haiyan.

The Philippines should reject the measly offer of a four-year peace clause. It should not be deceived into thinking that this is the best that can be achieved for farmers and the agriculture sector here in Bali.  There is no assurance being put on the table that the peace clause would be a stepping-stone towards a permanent solution and that our own food procurement program would be safeguarded.

If the Philippines is serious about seeking a permanent solution to the issue of subsidies for food security, it should assert that developing countries have the right to support its farmers and fishers, and that this right should be guaranteed and protected.  The right to food is non-negotiable and there should be no conditions imposed on developing countries seeking to defend this right, a right vital to life itself.

We urge the Philippine government to take a strong stand against the Bali package and join other developing countries in calling for the rejection of the deal.

It should stand up against pressures from rich countries pushing the further marginalization of developing country interest especially in agriculture.

We urge the Philippine government to look at the big picture in these Bali talks and not be misled by false promises nor pressured into accepting an agreement that would not serve the peoples’ interest.

DEFEND THE RIGHT TO FOOD!

KAMP (Campaign for a life of dignity for all)