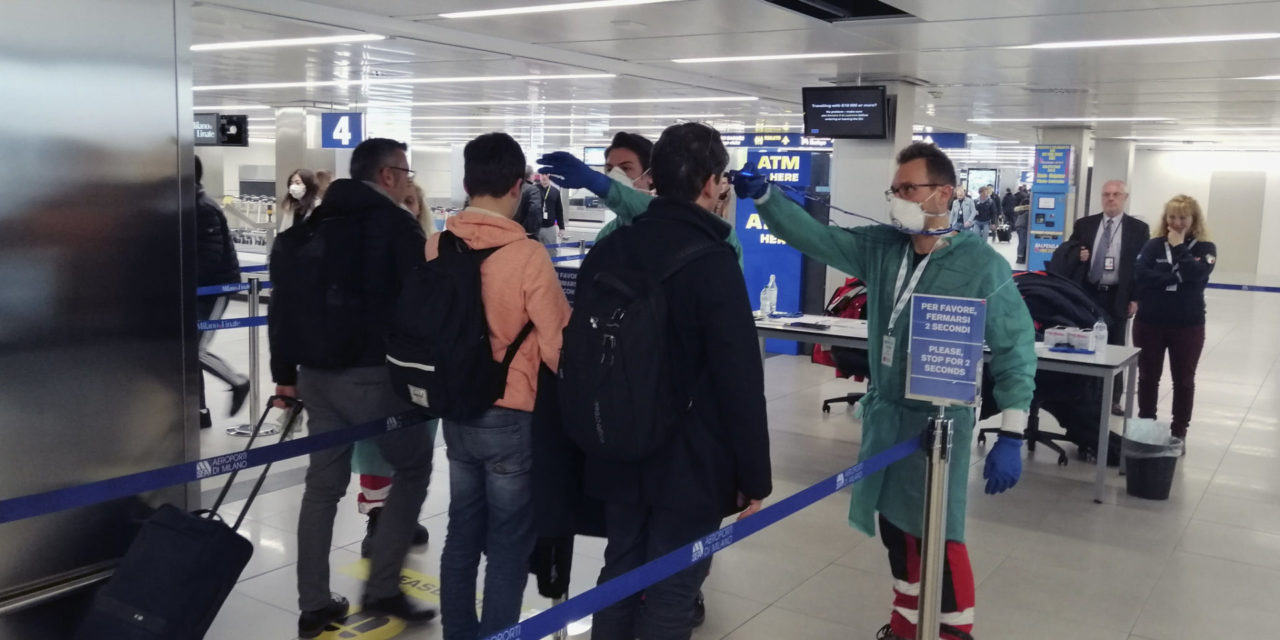 The novel Corona virus, also known as SARS-CoV-2, has ushered many parts of the world in a state of disarray. Within the span of a few weeks countries found themselves implementing measures that would otherwise be unthinkable. Italy and Spain have imposed a halt on all “non-essential” activities in order to slow the spread of the virus. With the number of infections soaring and already staggering economic fallout, the US has signed into law the biggest relief package in its history. In both the US and Europe health systems are being stressed to the point of near collapse. India has just extended a curfew for all of its population of 1.3 billion, in an attempt to prevent the country from reaching a pandemic stage of virus infections. Many other countries have severely limited public and economic life. International travel has almost come to a complete standstill, with the last departing long haul flights being deployed to bring stranded travelers to their home countries. While some countries seem to slowly have gone beyond the peak of infections, many others are still bracing for what is yet to come.

As with all crises, the ones who will be hit hardest as the pandemic unfolds; are the poor, the marginalized and the ones deemed dispensable. This is true both within countries and on a global, comparative scale. While the middle classes retreat to their reasonably comfortable homes, millions of people are left without protection from both the virus and the social and economic impact of lockdown measures. Migrants, day laborers, refugees, the urban poor, undocumented and homeless people around the world, are left stranded as support networks collapse and sources of income and access to essential infrastructure become increasingly unavailable.

Tens of thousands of migrant laborers all over India were suddenly left without food, shelter and pay, as a result of the surprise lockdown imposed by the government, with many of them desperately trying to return from urban centers to their faraway home villages. Since the outbreak started to pick up pace in the United States, millions of US workers have filed for unemployment. Livelihoods all around the world have been lost to the sudden stop of economic activity, with millions more crucially threatened. Especially informal workers, the self-employed and small scale traders without financial cushions to fall back on, are unable to mitigate even a few days of standstill.

The initial health crisis caused by the pandemic is accompanied by a second, multi-layered crisis, consisting of intertwined social, economic and political factors. This second, potentially even more devastating cataclysm will play out along the lines of already existing hierarchies such as class, race and gender, intensifying these inequalities. While at first glance it might seem that an impartial force such as a virus infection would affect every person equally, it has already become evident that privileges are immediately marshaled to lessen the infection’s impact. According to their relative economic and social positions, people around the world will be affected disproportionately by immediate and secondary effects of the SARS-CoV-2 pandemic. While contracting the virus and suffering a severe disease progression is indeed a possibility for most people, even if unlikely in many cases, the resources available to respond to this menace depend highly on nationality, geographical location and socioeconomic standing. It is fairly obvious that the marginalized everywhere will bear the brunt of the epidemic and the response measures it triggers.

The poor and disadvantaged usually suffer in silence, or at least removed from view, while the structural elements of their misery are most often overlooked and their hardships thus seem to be individual and disconnected from broader social configurations. When people cannot afford necessary medical care or do not posses savings for times with little or no income, it is usually seen as lamentable or even tragic but not as systemically conditioned: individuals suffering individual tragedies in individual circumstances.

The unfolding Corona pandemic will hopefully force us to revise these narratives and make us look at the fault lines that will become visible in the coming weeks. We will have to understand the systems that are in place and the ways in which we are implicated in them. We will have to analyze why some people are hit much harder than others, beyond the obvious parameters of age or underlying health conditions. We will have to acknowledge the social conditions that will determine how people experience the outbreak and the coping mechanisms available to them.

Moreover, labor relations and the social validation of certain types of work will have to be rethought. It turns out that long undervalued sectors such as care work, retail and the agricultural sector, are crucial in organizing a response to the health crisis and ensuring continued supply chains and food security. Medical staff, who all over Europe had long protested fund cuts, deteriorating working conditions and the privatization of health care, find themselves working at extremely high personal risk, yet are showered with mostly empty gestures of appreciation, often intensified and orchestrated by media outlets. Their labor policy and infrastructural demands had, on the other hand, gone unheard for the longest time.

As mentioned before, this not only holds true when looking at the outbreak within individual nation states but also on a global level. While Europe and the US have become the current focal points of the pandemic, it is more than likely that the outbreak will reach every part of the globe, potentially wrecking even more havoc in the Global South than in Central Europe and the US at the moment. With European health systems being dramatically overburdened, many fear that the health care provisions of many countries of the Global South might be helplessly overwhelmed once the numbers of infections start peaking there. Millions of severely sick might remain untreated, ultimately leaving countless to die. In this scenario, those attended will in all certainty be those able to afford it. Thus global hierarchies will be acutely felt during the SARS-CoV-2 pandemic, posing an even greater threat to more vulnerable regions of the world and especially to the disadvantaged within them.

But for all the intensification of hierarchies and the potential avenues to establish new inequalities that the pandemic will bring, it has also shown to be instrumental in disproving many conventional truths. The most important takeaway maybe being that people can actually come before markets, and indeed should – always. This simple statement, which might sound obvious to many, had slipped from a lot of “common”, mostly economic ways of looking at the world. The Corona outbreak has revealed that the wheels of the machinery of production and distribution can come to a halt when deemed absolutely necessary, even by political leaders, who otherwise insist on the incontestable primacy of the economic. We should not forget this once the pandemic is over – ever.

What we have to do, is to translate these findings, prompted by an acute pandemic, to our everyday lives. There is not only immediate danger to us and the world we live in since the spread of the novel Corona virus, but climate change and the exploitation of fellow humans and the environment pose a constant existential threat to all of us. A crisis that is poised to only accelerate in the coming years, if we do not drastically change our ways of being in the world; a crisis that will go far beyond any worst-case scenario SARS-CoV-2 might have in stock for us.

This pandemic, that only seems to be beginning, is truly terrible and will be even more so for the weak and defenseless. Robust networks of care for the vulnerable are therefore of immense importance at this point in time. But apart from the immediate imperatives before us, we should not miss the chance to discover a thing or two about the systems we currently live in. In that regard, what the corona virus does, is to teach us that the way the world works can indeed change – even abruptly if deemed inevitable by those in power. It is therefore our obligation to ensure that this is only the beginning of a series of fundamental changes for the better, all the while being extremely cautious of how this crisis might be misused; which it will be.

Another world is evidently possible. What it could look like seems to be more open to change than it has in a long time. 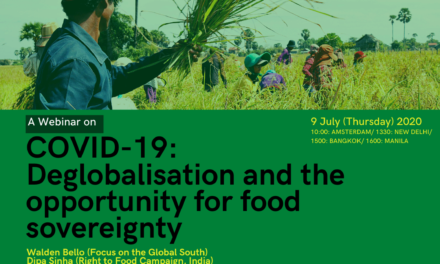 Webinar on COVID-19: Deglobalisation and the opportunity for food sovereignty 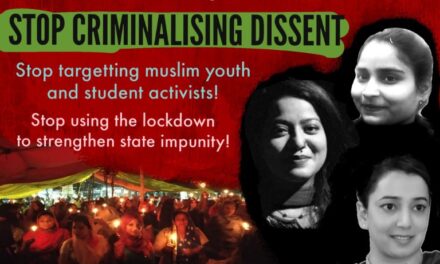 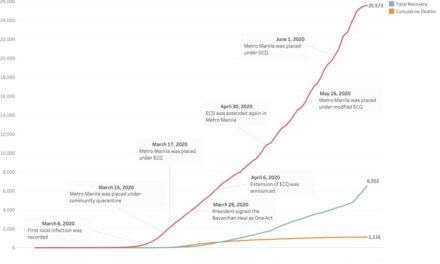 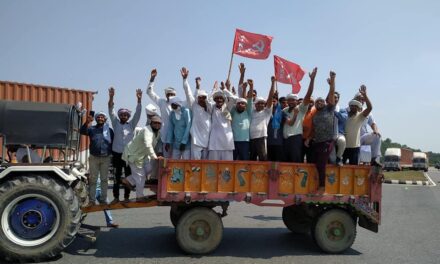