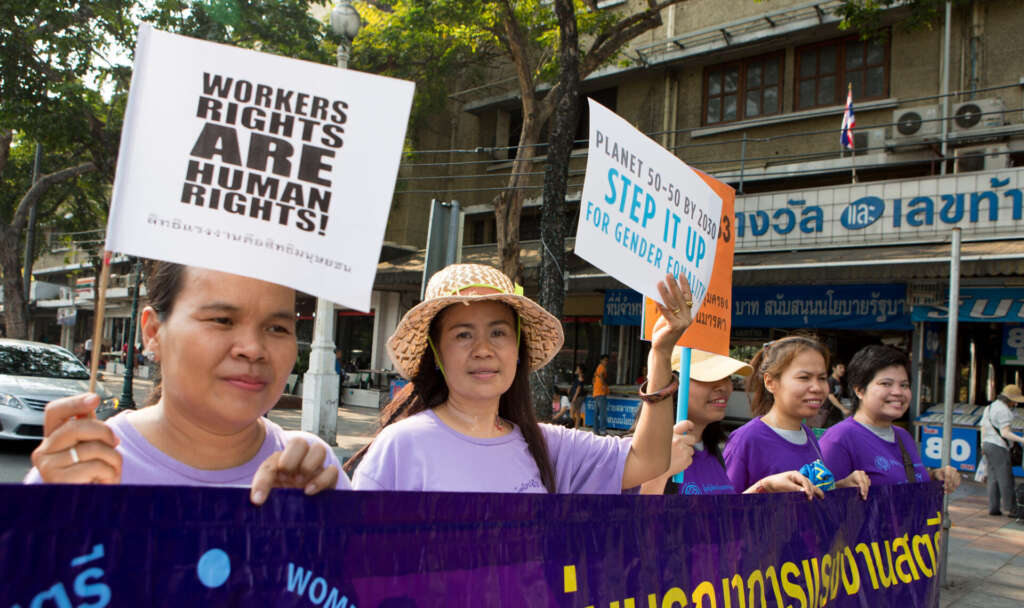 In 2020, Thailand was the first country in the world to detect COVID-19 transmission outside China. Since then, the Government has aggressively exercised executive and judicial measures, especially on the infinite extension of COVID-19 state of emergency decree, to control the outbreak and on-going political discontent. After two years, the COVID-19 pandemic and its restrictions provide a range of consequences for everyone in Thailand, particularly on women, where the impacts have highlighted the country’s reliance on service-tourism economy, the importance of inclusive and non-discriminative social policy schemes, as well as the current dynamics of women’s rights movement.

Women participate and contribute actively to Thailand’s economy. In 2020, 59% of female populations joined the labor force. While the country’s labor market is shifting out of the agriculture sector, women now represent around 52% of employment in services compared to 28% and 15% in agriculture and manufacturing respectively. This is a relatively new ratio due to the growth of services as the nation’s largest employer from 2014, mostly prevalent in Bangkok and other tourist’s destinations. The share of women employed in the services sector was the all-time highest, when the pandemic started in early 2020.

The tourism sector is Thailand’s economic engine. In 2019, prior to the pandemic, tourism had driven an income of 2 trillion baht (USD 61.5 billion) that equaled 11-percent of the national GDP. It also benefited 7 million persons and secured 20-percent employment. When the COVID first wave erupted, tourism was immediately the hardest-hit sector. From 40 million tourists, Thailand received almost zero visitors due to airport shutdowns and strict border control. The pandemic curbs, which included bans on leisure, entertainment, and recreation activities, increased the unemployment rate to 2.52% in the third quarter of 2021, a 16-year record high since 2005—more than half were those formally engaged in the services sector.

In mid-2021, the Thai Restaurant Association alone has estimated a 1.4 billion baht (USD 44.97 million) daily income loss and about 500,000 job losses, while the Government had no financial rehabilitation plans and relief measures provided for the affected business and its employees. The first relief measures for the affected business, employees, and households living in COVID-19 Red Zones, were approved through one-time cash transfer and small utility subsidies in the third quarter of 2021 – 1.5 year after the outbreak. As the Government claimed 80-percent beneficiaries accessing COVID-19 relief through the cash transfers scheme, comprehensive relief packages for targeted beneficiaries should have been in place way earlier, particularly for women and their families – who dominated half of the workforce in services.

Women’s welfare and social coverage during the outbreak

Similar to the global trend, the pandemic has brought about additional physical, mental, and economic burdens upon the majority of households due to job loss, decreased working hours and income.

Under the public health crisis, women are responsible for more unpaid care work, on top of their pre-existing pressure as primary caregivers and homemakers. According to the UN in Thailand, one-fourth (compared to 16% of young men) and two-fifth of young women (compared to 28% of young men) reported increased unpaid adult care and childcare during the epidemic.

Even with Thailand’s universal healthcare coverage, the family remains responsible for the patient’s primary care and other financial support. The Government’s allowances for the ill, disabled, and senior citizenry are insufficient to fully cover basic needs. Public services and assistance are also difficult to access, especially during the outbreak. Nonetheless, employees and people working in Thailand can still benefit from the Social Security Fund with all-round additional support for the registered beneficiary. Not every worker, however, could apply and contribute to the scheme.

Sex workers, for example, are not eligible to register in the Social Security System because their work is not deemed as legal in Thailand, and therefore they are unable to seek social coverage in case of income loss and sickness. Despite the internationally-known red-light districts, Thailand continues to maintain the illegal status of the sex industry under Thailand’s Prevention and Suppression of Prostitution Act (1996). As there are 200,000 sex workers in Thailand who earn their livings on a daily basis, the legalization of sex works in Thailand could additionally protect hundreds of thousand women and people from the most marginalized background from acute poverty and income insecurity during difficult time.

‘New Normal’, new mobilization on the Rights to Body

The long lockdowns and work from home environment has increased the cases of domestic violence worldwide. In Thailand, women’s rights activism and consent awareness campaigns continue, expand, and are getting incorporated in the call for civil rights and waves of pro-democracy political protests since the outbreak.

‘My Body, My Rights’ has been the issue in the spotlight for young Thais whose expressions are usually restricted by authoritarian and military-like school rules such as standard hairstyles and acceptable length of school’s socks and skirts. The liberation of the right to body has become a large public campaign, led by middle and high school advocates.

The exercise of these rights has strengthened existing women’s rights campaigns and on-going debates about the progress of the Abortion Law amendment. It has also contributed to a call to decriminalize sex related content, following the arrest of a law student and content creator on such grounds, with a parliamentary submission for the amendment of Section 287 of the Criminal Code.

The pandemic and Implications to Women’s Rights

The pandemic continues to expose flaws in social protection and at the same time presents new opportunities for leveraging women’s rights and comprehensive social safety nets in society. At all times, the active share of women’s labor force in all sectors confirms the role of women as breadwinners in Thailand, whose rights as workers and and as women are intertwined.  In this context, disproportionate care work and other burdens must also be counted in targeted relief programs, apart from universal cash transfers. The social protection fund, in addition, must be more inclusive and not discriminate against anyone on the basis of their work. The advancement of women’s rights movement finally is indispensable from the call for a just and more open society while the principles of human rights has become the core value to promote and link all civil, political, and economic rights in the mobilization.