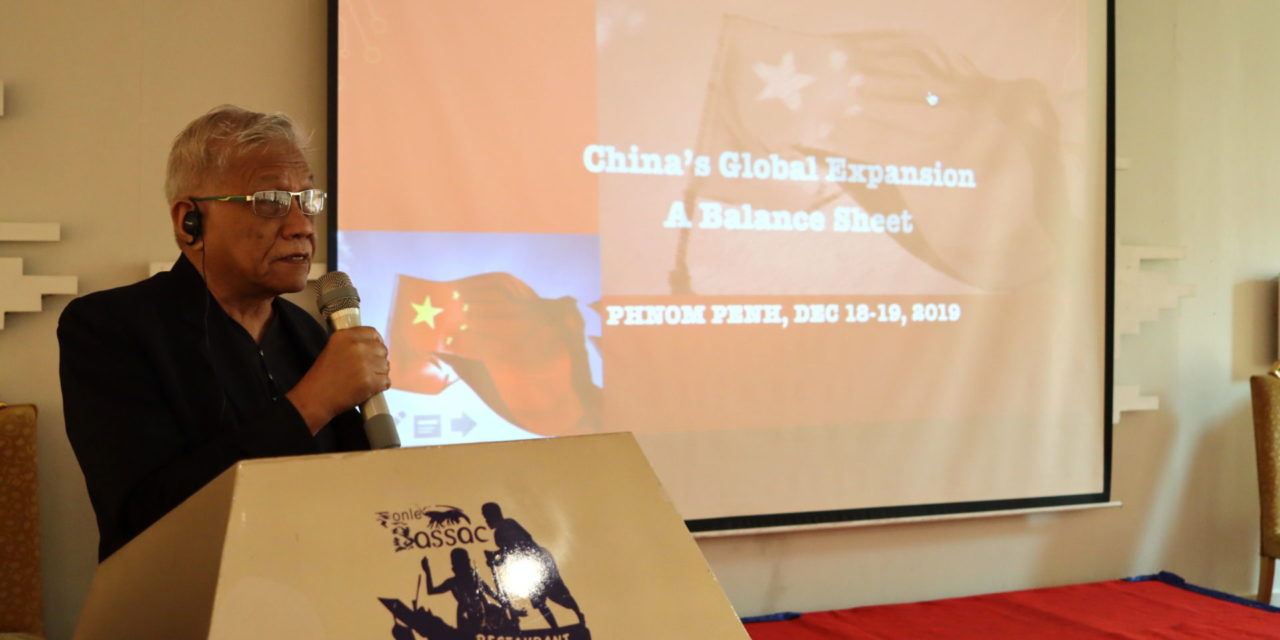 I would, first of all, like to thank Social Action for Community and Development, Workers’ Information Center, Focus on the Global South, and Women’s Network for Unity for inviting me to share my thoughts on China’s global economic presence.

In just 25 years since it has “gone out to the world,” China has become a superpower in global trade, investment, and lending. By 2017, it had become the world’s top trader, with its imports and exports valued at $4.1 trillion or 12.4% of global trade.

China has quickly become one of the world’s top investors, its cumulative stock of foreign investment coming to over $900 billion, with most of it in developed countries. It is on track to displace Japan as the world’s biggest net creditor, with a significant portion of its assets in the form of development finance for economies in the Global South.

When it comes to trade, China’s role is overwhelmingly a plus for developing countries. Its demand for food and raw materials has opened up an alternative market for countries of the South that had been mainly dependent on the US, Europe, and Japan before the 2000’s. Trade with China, however, has not been an unalloyed good since its cheap manufactures have contributed to making many local industries, especially in developing countries that already had a dynamic manufacturing sector.

Many economists have cautioned, however, against blaming Chinese imports as the cause of industrial decline, since structural adjustment programs pushed by the World Bank and the International Monetary Fund had already destroyed much of local manufacturing before Chinese goods arrived in earnest in the 1990s.

When it comes to development finance, China has also been overwhelmingly a plus for developing countries. In the much needed area of infrastructure building, where there is said to be an grossly unmet need of some $3 trillion, China offers practically the sole source of financing for many countries since Western-led financing for development has been stagnant for years now and Western agencies such as the World Bank and the IMF attach neoliberal conditionalities that impede development.

China, as Kevin Gallagher notes wryly, is now “the world’s largest development bank.” Two of its agencies, the China Development Bank and the China Export-Import Bank, have provided nearly a trillion dollars’ worth of financing to foreign countries since the early 2000’s.

The overall positive role of China’s expansion in the global South has, however, been clouded by criticisms of Investment by Chinese state enterprises, which is often linked to Chinese financing for development.

Chinese development loans are said to carry higher rates of interest than loans from Japan or the Western-dominated multilateral development banks. Many projects are faulted for aiding dictatorial regimes, yielding benefits only for local elites, disregarding labor rights, and promoting damage to the environment. There is no doubt that many of these criticisms are valid.

Chinese loans do carry a higher interest burden. The Chinese have lent to dictatorial regimes. The Chinese-funded Myitsone Dam in Myanmar would have destabilized communities of the Kachin ethnic minority had it not been stopped by the Myanmar government. NGO’s have also shown that the Chinese-financed Kamchay Dam in Cambodia and energy infrastructure projects in Ghana have mainly benefited dominant elites. And In Zimbabwe, Zambia, the Democratic Republic of Congo, and South Africa, Chinese firms, both state-run and private, have been associated with abusive treatment of local workers and a preference for employing imported Chinese labor.

These criticisms must, however, be placed within a broader picture.

Second, on the question of the interest burden of Chinese loans, while it is true that Chinese loans carry an interest rate above those that accompany loans from the World Bank, regional development banks, and bilateral donors like Japan, China has also engaged in many acts of debt forgiveness or debt cancellation. This year, 2019, it has written off $78 million debt owed by Cameroon; in 2018, it wrote off $72 million owed by Botswana and $10.6 million owed by Lesotho; and in 2017, $160 million worth of debt owed by Sudan.

The Rhodium research group found 40 instances of renegotiations of debts to China amounting to $50 billion across 24 countries since 2000. In his 2010 UN Millennium Challenge speech, then Prime Minister Wen Jiabao revealed that China canceled debt owed by 50 heavily indebted poor countries (HIPCs) and least developed countries (LDCs) worth 25.6 billion yuan ($3.8 billion) as of 2009, and would cancel more in 2010. Similarly, in 2018 Xi Jinping said during the Forum on China-Africa Cooperation that China would write off some interest-free loans to Africa’s poorest nations.

Third, on the issue of Chinese loans and investments helping to prop up dictatorial regimes, while there are instances where this is true, the claim does not seem to hold as a general rule. Investigation by Julia Bader, has, in fact, come out with the counterintuitive finding that “China’s economic cooperation appears to have unexpected positive effects for democratization,” that is, the level of Chinese aid is positively correlated with transitions to democracy. This is obviously an issue that must be probed further.

Fourth, while in certain cases, Chinese-funded projects do exacerbate inequality, global macroeconomic data indicate that Chinese lending offers not only alternative finance but alternative finance that tends to reduce inequality. Research by a transnational consortium of analysts from leading US and German universities found that “Chinese development projects — in particular, ‘connective infrastructure’ projects like roads and bridges — are found to create a more equal distribution of economic activity within the provinces and districts where they were located.” The study also measured the impact of Chinese development projects on economic inequality between provinces and districts, “and here too the results provide grounds for optimism: Chinese Government-financed projects appear to reduce, rather than widen, economic disparities between regions.”

While there is no macro correlation between Chinese projects and rising inequality, there is no doubt about the fact that IMF and World Bank-funded structural adjustment programs, with their harsh neoliberal conditionalities, led to a sharp rise in inequality and poverty among their recipients in the 1980’s and 1980’s.

Fifth, while China’s state enterprises are often assumed to pollute the environment more intensively than western corporations, there is, in fact, conflicting evidence on whether this is true. Certainly, western companies engaged in extractive and related activities, such as the Australian-Canadian mining giant Oceana Gold in El Salvador and the Philippines, have records that would compare with, if not surpass in notoriety, those of Chinese firms.

Moreover, western transnational firms have increasingly taken to subcontracting their cheap-labor and polluting operations to enterprises in developing countries, so that the comprehensive global impact of their value-chains, in terms of labor exploitation and environmental pollution in the Africa, Latin America, and Asia outside China is probably much greater than those of a limited number of Chinese state enterprises.

It has been shown, for instance, that carbon emissions arising from the global supply chains of the European pharmaceutical industry are about ten times as high as its emissions from direct operations. A similar picture is observed for water consumption (about three times as high) and air pollution (twenty times as high). Also, in the countries included in China’s Belt and Road Initiative (BRI), demand from US and EU consumers is said to be responsible for 30% of the carbon emissions in BRI countries through embodied carbon flows.

Not in same league as the West

Indeed, for all their complaints about the behavior of Chinese state enterprises in their countries, many people in developing countries do not place China in the same category as western corporations.

Looking closely at the depictions of China in both the government-controlled and opposition press in a number of African countries, one of the more even handed studies of China’s role in the continent found that, “African media have criticized Chinese individuals and corporations for bad behavior; a few Zimbabwean news articles were found to accuse China of neo-colonialism or portray China as an economic threat, and some South African and Zambian media articles have criticized their governments for being too friendly with China, but most articles have not portrayed China an evil empire out to exploit Africa….Although China gets its share of criticism in the African media, apart from a few exceptions, the African press did not see China as a neo-imperialist nor did they paint the Chinese in racist colors.”

These perceptions may, however, change if China does not make moves to correct its mistakes and allows questionable practices its corporations and agencies made in its first 25 years of the country’s opening up to the world to persist.
Countries that previously were willing to give China space to make mistakes owing to the fact that it was on a steep learning curve, may no longer be as tolerant in the next few years. Changing questionable or bad behavior will not be easy, but unless China acts soon, these behaviors can congeal into structural patterns similar to those displayed by western corporations.

In this regard, let me end by addressing the matter of the Belt and Road Initiative (BRI). Many have written about the BRI as a grand plan for global domination by Beijing. The reality is that it is really a desperate effort to create external market to solve the Chinese economy’s extremely serious problem of excess capacity, which has made production in China less and less profitable.

Some analysts say that it is a well thought out strategy executed from above. The truth is that it is an ill-coordinated, incoherent mess that is driven from below by competing provincial governments and authorities jockeying for resources, prestige, and the attention of Beijing. When it was first announced in 2013, it was just one belt, one road, or OBOR. By 2015, it had become three belts, two maritime routes, and six corridors. It has been opened to all countries on earth, so that one influential Chinese scholar Xi Lue has complained that “If you put it everywhere, [BRI} becomes nothing.”

Some think that China is an inexhaustible piggy bank that can fund the BRI’s ill assortment of projects. However, a number of conditions make this unlikely.

The biggest problem with the BRI is that is exporting not just China’s excess capacity problem but its ecological crisis as well. A great number of its projects are focused on dam building and creating coal-fired power plants, whose negative environmental consequences are already widely known. The BRI is, in truth, a grandiose anachronistic transference to the 21st century of the 20th century technocratic capitalist, state socialist, and developmentalist mindset that produced the Hoover Dam in the US, the massive construction projects in Stalin’s Soviet Union during the 1930’s, the Three Gorges Dam in China, the Narmada Dam in India, and the Nam Theun 2 Dam in Laos. These are all testaments to what Arundhati Roy has called modernity’s “disease of gigantism” or gigantomania. They represent a development approach that is obsolete.

Rather than being a route out of crisis, BRI may actually push China over the edge, taking a lot of the world along with it.

In conclusion, let me say that China has undergone a largely peaceful process of economic expansion. It is, however, now at a crossroads after 25 years of going out to the world. It can continue to ignore complaints about the behaviour of it state enterprises , private corporations, and citizens and allow these negative practices to congeal into structural patterns very similar to those of western powers. It can continue to disregard the fears of many that its top-down neo-developmentalist infrastructure-led program will have a massive negative and social footprint on a large part of the globe.

Or it can take these criticisms seriously and work with other governments and citizens’ movements to strike out on a different and more benign path in its evolving relationship with the  global South.

*Walden Bello is senior analyst at and co-chair of the Board of Focus on the Global South.  This speech summarized key points of the Focus study China: An Imperial Power in the Image of the West? that can be accessed at https://focusweb.org/publications/china-an-imperial-power-in-the-image-of-the-west/

Alternative views of the economic crisis: Walden Bello interviewed by the BBC