China: An Imperial Power in the Image of the West? 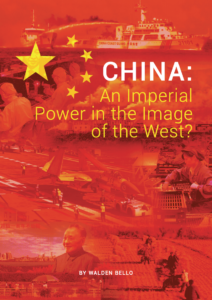 On the occasion of the 70th anniversary of the founding of the People’s Republic of China, Focus is releasing a comprehensive study that seeks to answer the question: Is China an imperial power in the image of the West in its relationship with the global south?

Over the last 15 years, there have been increasing accusations of Chinese state enterprises and private companies being involved in unfair labor practices, environmentally damaging projects, land-grabbing, locking borrowing countries into debt, and indirectly providing support for dictatorships. many of these accusations parallel similar criticisms of the behavior of state-owned enterprises, private capitalists, and local authorities within China itself. China has also drawn criticism for its unilateral moves in seizing disputed maritime formations and violating the territorial and economic rights of its neighbors in the south China sea. Many of these criticisms are valid, and unless China addresses them in a positive fashion soon, these questionable behaviors and practices could congeal into structures of domination similar to those that have marked the relationship of the West with the global south.

Perhaps, equally worrisome is that China’s expansion has its own complex of worrisome characteristics that are not reducible solely to reproducing western patterns but can also lead, if unchecked, to hegemonic behavior. Foremost among these is a technocratic top-down approach to development with a cross-ideological appeal that is resistant to democratic control and insensitive to environmental considerations, fully on display in Beijing’s Belt and road Initiative.

Frank and fearless criticism of China’s disturbing practices, the study argues, is the best way to help prevent it from following in the footsteps of the West.

“Walden Bello has been one of the most powerful intellectual warriors against Western hegemony and an empathetic advocate of independent development in the Global South for decades. Now, confronting the rise of China, Bello pulls no punches in critiquing this new hegemon and analyzing its origins and weaknesses.”

Ho Fung Hung
Wiesenfeld Professor in Political Economy, Johns Hopkins University; author of The China Boom: Why China Will not Rule the World.