Posted by cvmilitante | May 10, 2017 | Alternative Regionalisms, Philippines, Trade and Investment 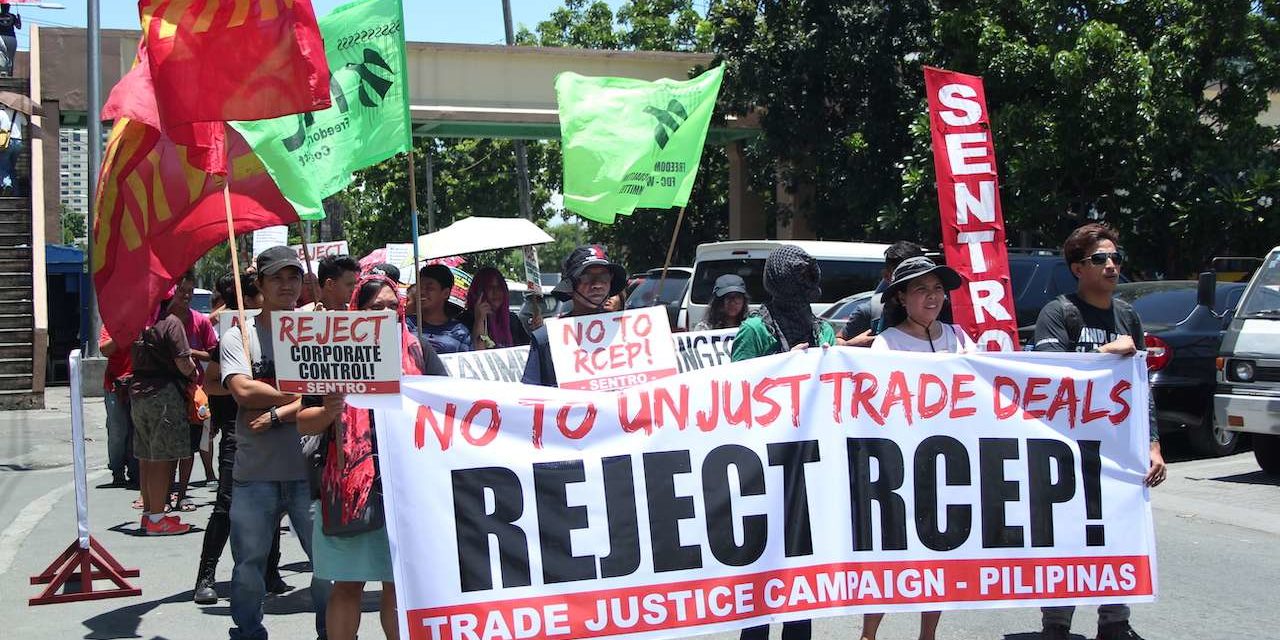 We urge the leaders of the ASEAN Member States to defend the primacy of human rights, environmental integrity, and peoples’ welfare against international economic agreements like RCEP that advance commercial interests and the corporate agenda, and impinge on the ability of the government to advance the greater public interest.

Furthermore, we call on the Philippine government, as Chair of ASEAN for 2017, to demonstrate leadership in raising the peoples’ concerns against RCEP during the 18th round of talks here in Manila.

In the Chairman’s Statement from the 30th ASEAN Summit in Manila, Member States led by the Philippines, reiterated the common vision to build a truly inclusive, people-centered, and people-oriented ASEAN community and stressed the centrality of ASEAN in the RCEP talks.

We assert that RCEP and other new generation free trade and investment agreements ran counter to the vision of a people-centered ASEAN. Contrary to the view expressed by ASEAN leaders that the RCEP talks have progressed considerably, the direction of the talks have in fact moved backwards with the agenda becoming more ambitious, albeit in favor of transnational corporations, therefore demanding deeper commitments from parties.  RCEP has become in many respects worse than the Trans Pacific Partnership Agreement or TPP.

Our opposition to RCEP is anchored on the following concerns:

RCEP is a threat to public health and peoples’ access to medicines. The proposed agreement with TPP+ and TRIPS+ provisions on intellectual property rights will make it harder for poor people in the region to access affordable medicines particularly life-saving drugs, and for governments to advance public health policies for the benefit of the poor.  The IPR chapter and many other provisions in the proposed agreement could undermine State policies on public health enshrined in Constitutions and national health laws like the Cheaper Medicines law in the Philippines.

RCEP will give corporations—many of which have annual revenues bigger than the GDPs of most countries in ASEAN, the right to sue governments over public policies and regulations in secret, ad-hoc corporate courts.

The investor state dispute settlement provision or ISDS, which has been highly criticized in the context of TPP negotiations, should be strongly rejected as well by ASEAN governments as an instrument that will weakening the right of State to regulate investments in the name of the greater public interest.

RCEP will straight-jacket governments, curtailing their power to use public policies to advance development agenda by putting in place prohibitions on performance requirement such as policies on domestic content and export restrictions, policies that favor employment of locals over foreign workers or even those that push for technology transfer.

Just like in all other trade negotiations, the Legislative Branches of the different governments are almost entirely shut out of the process, even as the proposals on the table would in fact amend if not repeal existing laws. In the same breathe, while these Legislatures have the power of taxation, they have practically no say in trade and investment negotiations that would eventually lead to losses in tariffs and other taxes.

Amidst the continuing backlash against globalization policies that have disenfranchised and marginalized the working class, the imperative is really to push back on RCEP and new generation trade and investment agreements that advance the corporate agenda over peoples’ interests.