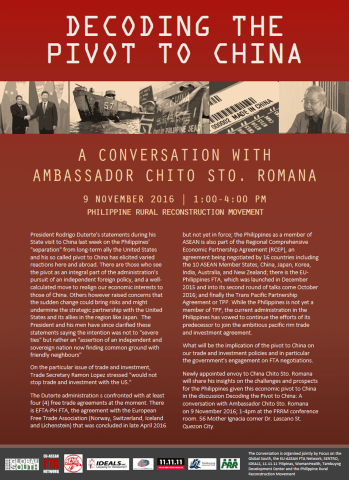 President Rodrigo Duterte’s statements during his State visit to China last week on the Philippines’ “separation” from long-term ally the United States and his so called pivot to China has elicited varied reactions here and abroad. There are those who see the pivot as an integral part of the administration’s pursuit of an independent foreign policy, and a well-calculated move to realign our economic interests to those of China. Others however raised concerns that the sudden change could bring risks and might undermine the strategic partnership with the United States and its allies in the region like Japan.  The President and his men have since clarified these statements saying the intention was not to “severe ties” but rather an “assertion of an independent and sovereign nation now finding common ground with friendly neighbours”

The Duterte administration is confronted with at least four (4) free trade agreements at the moment. There is EFTA-PH FTA, the agreement with the European Free Trade Association (Norway, Switzerland, Iceland and Lichenstein) that was concluded in late April 2016 but not yet in force; the Philippines as a member of ASEAN is also part of the Regional Comprehensive Economic Partnership Agreement (RCEP), an agreement being negotiated by 16 countries including the 10 ASEAN Member States, China, Japan, Korea, India, Australia, and New Zealand; there is the EU-Philippines FTA, which was launched in December 2015 and into its second round of talks come October 2016; and finally the Trans Pacific Partnership Agreement or TPP. While the Philippines is not yet a member of TPP, the current administration in the Philippines has vowed to continue the efforts of its predecessor to join the ambitious pacific rim trade and investment agreement.

What will be the implication of the pivot to China on our trade and investment policies and in particular the government’s engagement on FTA negotiations?

Newly appointed envoy to China, Chito Sto. Romana, will share his insights on the challenges and prospects for the Philippines given this economic pivot to China in the discussion Decoding the Pivot to China: A conversation with Ambassador Chito Sto. Romana on 9 November 2016; 1-4pm at the PRRM conference room. 56 Mother Ignacia corner Dr. Lascano St. Quezon City.