By Tom Reifer, Department Of Sociology, University Of San Diego (1)

*This essay draws on work-in-progress for the forthcoming work, by Gar Alperovitz and Tom Reifer, War & the American System.

The dawn of the second millennium brought both change and continuity in terms of war and the American system. Well before the terrorist attacks of September 11, 2001, the Bush administration was pursuing an increasingly aggressive foreign and military policy. In this context, as Mary Kaldor notes

it can be argued that the cuts of the early 1990s are equivalent to the reductions that can be expected in the normal post-1945 US military procurement cycle….During the downturns, military R&D is always sustained, designing and developing the systems to be procured in the next upturn. As new systems reach the more expensive development and procurement phases, this has always coincided with renewed preoccupations with threats of various kinds.(2)

Such a focus on new threats was apparent long before September 11, 2001. The attacks of that day and the real threat from Al Qaeda presented neoconservative hawks with a perfect opportunity to implement ambitious plans for high U.S. military spending and aggressive overseas policies outlined long before, including pulling out of international treaties and moving forward with plans for the militarization of space.
Recently, the Air Force has been pressing the Bush administration to formally embrace an aggressive strategy for space. Here, the Air Force is essentially following the trajectory set by the recommendations of the 2001 Rumsfeld commission which urged that the military give the President the option to deploy weapons in space, and the 2002 U.S. withdrawal from the Anti-Ballistic Missile Treaty which banned such space-based weapons. This trajectory, however, is not simply a Republican Party program, but is widely embraced by the Democratic Party and elite circles more generally as well, including in the Clinton era. Pentagon space warfare, like the late 19th, early 20th century navy or later programs of the Air Force, serves both as a form of public subsidy of private profit, though funding high technology industry, as well as a way to build the military forces to protect increased U.S. investments, for control of worldwide resources and to manage related geopolitical alliances overseas. U.S. technology, from aerospace, electronics, to computers and telecommunications, is largely an offshoot of this Pentagon system of industrial planning, a state-corporate capitalism which serves to incubate high-technology industry until it can be privatized by being turned over to for profit corporations. Thus, a major function of the first Gulf War in 1991 was to protect the Pentagon budget by showing the relevance of the military in the aftermath of superpower confrontation. Revealed here was the extent to which the Cold War was largely a pretense for the Northern domination of the global South and the larger U.S. war against the Third World. (3)
Many of these connections are explicitly recognized by the Pentagon. In the words of U.S. Space Command’s own Vision For 2020 under President Clinton, “U.S. Space Command-dominating the space dimensions of U.S. military operations to protect U.S. interests and investments…During the early portion of the 21st century…space forces will emerge to protect military and commercial national interests and investments in the space medium due to their increasing importance.” (4) Such plans continue today in the Bush administration.

A new Air Force strategy, Global Strike, calls for a military space plane carrying precision-guided weapons armed with a half-ton of munitions. General Lord told Congress last month that Global Strike would be “an incredible capability” to destroy command centers or missile bases “anywhere in the world.”
Pentagon documents say the weapon, called the common aero vehicle, could strike from halfway around the world in 45 minutes…
Another Air Force space program, nicknamed Rods From God, aims to hurl cylinders of tungsten, titanium or uranium from the edge of space to destroy targets on the ground, striking at speeds of about 7,200 miles an hour with the force of a small nuclear weapon.
A third program would bounce laser beams off mirrors hung from space satellites or huge high-altitude blimps, redirecting the lethal rays down to targets around the world. A fourth seeks to turn radio waves into weapons whose powers could range “from tap on the shoulder to toast,” in the words of an Air Force plan. (5)

The current trajectory of neoliberal militarization at home and abroad is the refocusing of the U.S. government on the “war on terror,” including a substantial reorganization of the Federal Government, replete with a new Department of Homeland Security.
Yet in the aftermath of the invasion of Iraq and growing insurgency there, ultimately it was the rains of Hurricane Katrina and floods that followed that exposed the deeper fault lines of race, class and gender running right through the heart of U.S. society. Years of neglect of the nation’s human capital and physical infrastructure – after recurrent decades of tax cuts for the wealthy and deficit-financed militarization funded by offshore borrowing, most recently for the Iraq war – were also dramatically exposed in the failure of the government planning for and response to Hurricane Katrina. The disaster in the Gulf States of the U.S. was a massive one, and some 90,000 square miles are now covered under a federal disaster declaration, an area roughly the size of Great Britain.
The embrace of multiple wars in the 21st century, against the so-called Axis of Evil, notably Iraq, and Al Qaeda, led to enormous rises in US military-related spending, now totaling well over $500 billion annually, when one includes not only the formal military budget, but money for ongoing operations and the Homeland Security Department, under which a host of agencies, including the Federal Emergency Management Agency (FEMA) are now housed. (6)
The economic stimulus of federal spending, notably increases in the military budget, are believed by many experts to have clearly minimized the period of economic recession in the early years of the 21st century, though with less of an effect than during past bouts of military Keynesianism.(7) In the second quarter of 2003, from April to June, the war with Iraq and related U.S. military actions led to the biggest increase in military spending – some 44.1% – since Fall 1951, the time of the enormous leap in military spending ushering in the Korean War boom. Military spending accounted for a full 1.69 percent of the rise in G.D.P. in the second quarter of 2003, or some 70% of the total increase.(8) In the first quarter of 2004, the economy grew at a 4.2%, with military spending again making up a significant portion of the rise, accounting for up to $17.4 billion of the G.D.P. increase of $108.5 billion in the first quarter, after adjusting for inflation. (9)
As one commentator recently noted

The military is now the de facto welfare state. The armed forces and the Department of Veterans Affairs are the two largest health care providers in the United States. The military is also a major bankroller of higher education through the G.I. Bill. (10)

Nevertheless, today, as during the new Cold War (beginning in the late Carter years), the trillions of dollars for the new militarism, financed regressively through offshore borrowing and from the wealthy awash in tax cuts, has mortgaged public investment, in the words of Mike Davis, “the fiscal equivalent of several New Deals” – for generations.(11) According to one recent estimate, while Vietnam cost U.S. taxpayers some $600 billion (in current dollars), the costs for the Iraq war could be over $700 billion, assuming the U.S. stays there for ten more years; another estimate, looking at operation in Afghanistan, Iraq and America’s presence in the Middle East calculates even higher costs:

…if American military presence in the region lasts another five years, the total outlay for the war could stretch to more than $1.3 trillion, or $11,300 for every household in the United States.(12)

And as during late 1970s and 1980s, America’s debt-financed militarization has been accompanied by continuing declines in federal aid to the cities and disaster protection, this at a time when millions of whites were moving from America’s largest metropolitan centers to suburbs, while millions of Latinos, Asians and Blacks were moving into increasingly impoverished, abandoned and decaying metropolises.(13)
Metropolitan New Orleans is something of a statistical anomaly here, being the only large metropolitan region of the country where African-American out-migration has occurred in each decade since 1965, according to the Brookings Institution. (14)Nevertheless, the city of New Orleans still had an overwhelmingly black majority population, all the more so with the substantial white-flight from the metropolitan region. Thus, like other large cities, the overlay of race and class concentrated in space – an American apartheid – meant that federal cutbacks to urban areas would hit these groups the hardest. (15)
Estimates by Demetrios Caraley and others indicate that cutbacks in federal aid of some 64% cost cities an average amount of $26 billion annually from 1980-1990 (in constant 1990 dollars); during part of this same period, from 1979 to 1985, deficit-financed military spending rose from some $150 to $300 billion annually, financed by the most regressive possible means, though tax-cuts for the rich and overseas borrowing.(16)

Spent on cities and human resources, these immense sums would have remade urban America into the Land of Oz instead of the urban wasteland it has become.
The social burden of servicing this deficit may be measured by comparison to the annual combined budgets of America’s fifty largest cities. In 1980 the interest payments on the federal debt were twice as large as the aggregate big-city budgets; today they are six times larger. Alternately, the $300 billion 1990 deficit was simply equal to the annual interest costs on a federal debt soaring toward $5 trillion. (17) 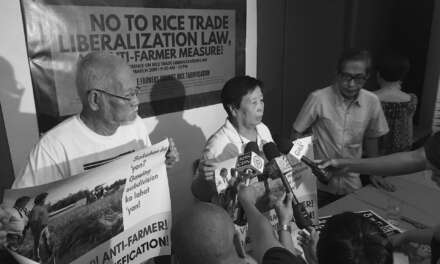 Philippine Agriculture is Dying—What Will It Take to Save it?

THE WISDOM OF WALL STREET