Untangling the mess at the 15th ASEAN Summit in Thailand

Re: People’s Participation in ASEAN Affairs

We, the Joint Thai-Regional Working Group on ASEAN Peoples’ Forum, wish to raise our serious concerns regarding the unilateral decisions made by some ASEAN governments with respect to civil society representation at the informal interface between civil society and ASEAN leaders at the 15th ASEAN Summit in Cha-am/Hua Hin, which led to 5 duly selected representatives of civil society being denied access to the interface and, as a consequence, 3 further representatives withdrawing their participation.

Heartened by the Chair’s earlier efforts to provide increased space for an interface between civil society and ASEAN leaders at the 14th ASEAN Summit on 26 February 2009 and encouraged by the positive response by the Chair and the Prime Minister of Vietnam on ASEAN’s willingness to engage with civil society, we, from the ASEAN People’s Forum representing civil society organizations from the region, developed and organized a transparent, inclusive and democratic process by which to draft a statement of civil society concerns to the 15th Summit and to select representatives to present this statement.

We noted that the 20 July 2009 Joint Communiqué of the 42nd ASEAN Foreign Ministers Meeting in Phuket confirmed this:

“We reiterated our commitment to promote greater participation by our peoples in the ASEAN community-building process. In this connection, we were pleased with the outcomes of the informal meetings between our leaders and the representatives from various groups, namely the ASEAN Inter-Parliamentary Assembly (AIPA), youth and civil society organizations from ASEAN Member states during the 14th ASEAN Summit in Cha-am Hua Hin.”

This Communiqué contains no mention of an agreement at this meeting that each ASEAN government would choose its own CSO representative for the interface with ASEAN leaders at the 15th ASEAN Summit. The Ministry of Foreign Affairs of Singapore claims in a statement on 23 October 2009 that such an agreement was made. The existence of this agreement was not communicated to us organizers of the ASEAN People’s Forum/ASEAN Civil Society Conference (APF/ACSC). We are also not informed of the agreement at the ASEAN Socio-Cultural Community Council in Bangkok last August that CSO representatives should be chosen from humanitarian and development sectors, as claimed by the same statement.

We regard these agreements as unacceptable in that (a) they do not ensure that civil society will in fact be represented; (b) they have emerged through a non-transparent manner; (c) they were not communicated to civil society; and (d) they are in direct contradiction to the commitments given earlier by the Chair about continued engagement with ASEAN civil society and to ASEAN’s professed commitment to ‘advancing a people’s ASEAN’.

We, the APF/ACSC organizers presented to the Ministry of Foreign Affairs of Thailand a proposal for our meeting which included a process whereby any CSO in ASEAN could register to participate in the meeting, where a Statement for presentation to ASEAN leaders would be developed by open consultation, and where CSO representatives of each ASEAN country, through a caucus, would select their country representative to communicate the Statement in the interface to ASEAN leaders. It was important and rational that these representatives be chosen from those attending the meeting and embody the collective aspirations of the APF/ACSC.

When we learned that five of the ten representatives selected in the meeting were banned from the Interface and their places were taken by persons selected by ASEAN governments, some of whom had not even attended the APF/ACSC meeting and were unaware of the contents of the statement, and that CSO representatives were not allowed to speak at the Interface, three of the CSO-selected representatives, namely from Thailand, Malaysia and Indonesia, felt that the terms of the Interface had been compromised to the point of futility and withdrew their participation. This is definitely not a healthy state-civil society relationship.

We deeply regret and deplore the situation that arose. We from civil society have consistently acted in a manner that is transparent, inclusive, democratic, and in line with what we consider to be important aspects of the ASEAN Charter. We have kept the governments of ASEAN informed, through our communications with the Ministry of Foreign Affairs of Thailand.

In contrast, the governments of ASEAN dealt with us and made decisions in a non-transparent, exclusive and non-democratic manner. They also failed to ensure that their decisions were communicated to civil society organizers and representatives to the interface.

We do not accept that governments select civil society representatives to interface meetings, especially with respect to those member states where governments do not have alternative effective methods of engaging directly with civil society.

Furthermore, we do not accept the argument that interface with civil society should be restricted to the Socio-Cultural pillar and that civil society could not have a say with respect to the Economic and Political Security pillars. We also deplore the fact the we could not propose enhancements to the current structure such as the creation of an Environmental pillar to address immediate concerns like climate change and depletion of natural resources in the region due to manmade activities.

We also fail to understand how a meaningful interface can be conducted with any sincerity when, on one side, governments demand that civil society remain silent. This makes a mockery of both the principles of the ASEAN Charter and of the assurances that the Chair has earlier given with respect to broadening space for government-civil society interface and ASEAN’s engagement with civil society.

In the conviction that a people’s ASEAN requires long-term evolutionary cooperation between ASEAN and its peoples, which require frequent and continuous dialogues, we respectfully call on ASEAN to create, in consultation with people’s organizations, mechanisms to ensure meaningful participation of the people in policy making. These mechanisms must include information disclosure, translation of ASEAN documents, and people’s participation in monitoring mechanisms. 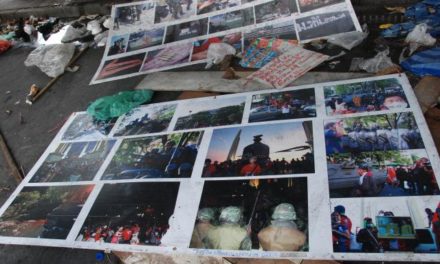 THAILAND: FROM THE KITCHEN OF THE WORLD TO FOOD SOVEREIGNTY