By Nicola Bullard
The International Monetary Fund’s announcement that poverty reduction is now at the centre of its lending programmes was greeted with incredulity by many activists and journalists in Washington for the IMF and World Bank annual meetings.
After two years of bad press, especially in the US where Congressional support for the Fund is at an all time low, the IMF has responded with an all-out public relations offensive to win the hearts and minds of its critics.

The attack has been launched on several fronts, all aimed to show the ‘caring side’ of the Fund. To kick it off, the IMF Board has approved a new ‘poverty focussed approach’ to lending which replaces the tough language of structural adjustment with the more up-beat ‘poverty reduction and growth’. Debt relief, too, is now part of the IMF’s mandate as it takes on the role of implementing the Cologne Debt Initiative. And, at every turn, the Fund is trying to ‘engage civil society’ with its new-found interest in good governance, openness and transparency.

A rose by any other name

The IMF kicked off its public relations campaign by launching the Poverty Reduction and Growth Facility (PRGF). The PRGF – which has already been dubbed the Poverty Growth Facility by one US congressional aide – replaces the now thoroughly discredited Enhanced Structural Adjustment Facility (ESAF) which was the source of hundreds of structural adjustment loans designed to put developing countries through the neo-liberal wringer. Typically, ESAF loans are conditioned on far- reaching privatisation, liberalisation and deregulation – all of which have disastrous consequences including pushing down already low wages, cutting access to health and education for even the poorest, and pitting local industries against the unfair competition of huge transnational corporations. And to add insult to injury, after suffering the pain of structural adjustment, these countries did not even get the accelerated growth promised by the Fund.

One new element of the PRGF is the way that national Poverty Reduction and Growth Strategy Papers (PRGSP) will be prepared. (Sorry about the acronyms, they’re the IMF’s, not mine.) In the past, this was done by swat squads of IMF technocrats who made hit and run visits to the Ministry of Finance of the relevant country (something like ‘if it’s Tuesday, it must be Romania’). The Fund has now come up with the astonishing notion that governments, in consultation with civil society and business, should be in charge of shaping their own national plan. However, just to make sure that this radical approach doesn’t lead to anything dangerous, such as progressive taxes or nationalising public services, the IMF and the World Bank have retained the right to veto loans unless the plans meet the IMF’s and the Bank’s standards of a ‘sound macroeconomic framework’ and ‘good governance’ (whatever that means).

And as a fall back position, the IMF will still require lending countries to negotiate a Letter of Intent which is likely to contain the usual array of IMF conditions.

The second wave of hype at last week’s meetings was the announcement that the G7-backed Cologne Debt Initiative is now fully funded. The debt reduction plan will be managed by the IMF and of course there are strings attached. The 40-odd highly indebted poor countries eligible for debt relief (which is a long way short of cancellation) have to prove to the IMF that the funds saved through reduced interest payments will be transferred to social spending, and that this is done in the framework of (you guessed it) ‘sound macroeconomic policies’ and ‘good governance.’ This is a cruel irony, given that in many of these countries debt has continued to accumulate despite years of IMF structural adjustment programmes.

The Cologne debt plan has been roundly criticised by the international Jubilee 2000 campaign, especially those from the South who are sick and tired of being told what to do by the North. In particular they object to the meanness of the plan, the conditions attached to debt relief and the increased powers of the international financial institutions. Jeffrey Sachs, Director of the Harvard Institute for International Development (already well known in Thailand for his scathing criticism of the IMF’s handling of the financial crisis) has come out as a champion of debt cancellation. Speaking about the IMF, the Bank and the US Treasury in Washington last week he said, “these people are not interested in canceling the debt because they want to keep control over these economies. They want to run the show rather than solve the problem.” And he should know: he used to work for them.

Another strategy in the IMF’s campaign to show a human face is ‘engaging civil society.’ In stark contrast to last year’s annual meetings when the IMF held just one official encounter with non- government organisations, this year’s programme was jammed with IMF-hosted briefings, debates and a reception for NGOs.

Although most of these meetings were mild and friendly, there was one telling incident during a debate on structural adjustment between the Fund and Oxfam Great Britain. Jack Boorman, head of the IMF’s Policy Development and Review Department, who was chairing the session, chastised Oxfam for their publicity stunt of distributing boxes of IMF ‘pills’ labeled ‘Bitter Economic Medicine for the Third World: hard to swallow, tested on people’ and carrying the warning ‘Do Not Expose to Reality.’ Mr Boorman questioned the use of Oxfam money and defended the IMF by saying ‘we do not park our values with our cars in the morning.’ He even reached into the dictionary for a definition of ‘civil’ as a minimal level of politeness. Obviously in his view Oxfam had failed to come up to the mark. No doubt Mr Boorman believes in his work and works exceptionally hard, but his outburst sharply defined the extremely limited terms of engagement.

The IMF’s efforts to recuperate its public image and give a human spin to its programmes may be well intentioned. They certainly are amusing. For example, the Fund has printed thousands of small gray cards headed ‘7 Pledges on Sustainable Development’ listing various internationally endorsed targets on health care, education, poverty eradication, and so on. IMF Managing Director Michel Camdessus was seen pulling one of these from his pocket at a press conference – maybe as a prompt in case he lapsed and started talking about fiscal austerity and interest rates when he was meant to be talking about poverty.

But nothing has really changed. While the IMF will encourage governments to develop poverty focussed development strategies, it still has the power to impose heavy conditions and veto loans. It will fund debt reduction for the world poorest countries, but only if they can jump the IMF’s ‘sound macroeconomic policies’ and ‘good governance’ hurdles. And it will engage with civil society, but only as long as they are ‘civil.’

In the past twenty years, IMF and World Bank policies have failed to protect and promote basic human rights and have even worked against the efforts of communities, national governments and other UN agencies. While the IMF’s new approach and new language implicitly acknowledges this failure, in the absence of any fundamental rethinking of its neo-liberal economic policies and without a dramatic reduction in its power to impose policies on the Third World, the IMF’s Poverty Reduction and Growth Facility is at best an oxymoron, and at worst a cruel public relations trick.

* Nicola Bullard is deputy director of Focus on the Global South 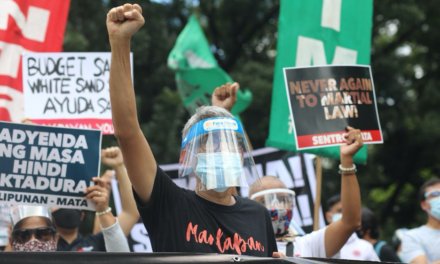