Swiss civil society groups as well as international non-governmental organizations have joined forces to call for a mass mobilization against the current round of services negotiations at the World Trade Organization (WTO).In calling for this mobilization, the groups said that the services negotiations are still geared towards complete liberalization and deregulation of domestic markets, which pave the way for privatization and increase the influence of multinational corporations over essential public services.

The groups making the call include the Swiss-based Bern Declaration and the Public Sector Trade Union, as well as Public Services International (PSI) and the Bangkok-based Focus on the Global South.
The current round of the General Agreement on Trade in Services (GATS) negotiations got underway on 7 February for a three-week session, which the groups said,comes at a very critical point in the overall negotiations.

At the end of this round of services negotiations, it will become clear whether or not the May 2005 deadline set under the July framework is achievable, they said, adding that not only would it determine the future of the services negotiation but also negotiations in other areas such as agriculture, and non-agricultural market access.
The groups complained that the negotiations are still taking place behind closed doors and most of the WTO members are not ready to publish their requests and offers.
They called on governments to publish in detail their liberalization requests and offers to enable a public discussion in every country, and to stop the GATS negotiations until careful, detailed and independent assessments have been made of the already liberalized services sectors.

At a press briefing Friday, Jacques-chai Chomthongdi of the Focus on the Global South questioned the claims made by proponents of services liberalization on the success and positive consequences of liberalization in the services sectors, noting that there has been an increase in the prices and a fall in the quality
of services especially in the water sector due to liberalization.
He also pointed to reports that multinational water companies in some countries prefer to pay fines for not complying with their contracts rather than undertaking the required investments in water infrastructure, as this would be more costly.
In Argentina, for example, there has been no new investment made at all by the water companies.

But there has been increasing resistance to the privatization of water services, he said, pointing out that a public referendum recently in Uruguay showed that people do not believe in privatization any longer. Uruguay has now classified water as a public good in its constitution and that it has to be publicly controlled.

Resistance is also emerging in the developed countries including in Switzerland where the city of Geneva, for instance, had declared itself to be a GATS-free zone.

The EU has continued to demand the liberalization of water services even though countries like Belgium, Italy, Austria and the UK, all EU member states, have voiced concerns.
Chomthongdi said that the claim that services negotiations are lagging behindagriculture, and thus developing countries should give more in services, is unacceptable in that "we have not seen any progress in agriculture thatwould genuinely benefit farmers in developing countries. On the other hand,if rich countries cannot make real progress on Mode 4 (movement of natural persons),there is no reason for poor countries to give away their domestic service market."

Marianne Hochuli of the Bern Declaration said that developed countries are pushing developing countries to liberalize and deregulate their financial and tourism markets. These developed countries, she added, argue that foreign firms will enhance competition and will bring in additional know-how and technology into
these sectors.
However, the contrary is the case, she pointed out, saying that the presence of foreign banks, for example, do not necessarily lead to better access to credit for small and medium enterprises, for women and the rural population. These banks mainly attract richer customers, leaving local banks or insurance institutions with less profitable clients and less means to compete with foreign providers.

She added that experiences since the second half of the 1990s showed that competition from foreign banks in the developing countries can also weaken the local banks and increase their susceptibility to crises.
Hochuli noted that the developed countries are also pushing for the elimination of all controls on capital flows. In doing so, these countries completely ignore the importance of such controls for developing countries. And since the Asian crisis, it is known that rapid capital inflow often causes speculative bubbles on the stock market or tends to increase inflation.Hochuli also raised concerns over the attempts by the developed countries to force developing countries to liberalize their tourism markets. The rigid WTO principles of ‘market liberalization’ and ‘national treatment’, she said, are not suitable for promoting sustainable tourism.

Further commitments for the liberalization of tourism sector under the GATS will pose a threat to the increasingly numerous initiatives for responsible tourism that benefits the local population and helps protect their livelihoods.

Moreover, Hochuli added, increasing global competition in the travel and tourism industry will increase concentration in the tourism sector, to the disadvantage of many small hotels, restaurants and tourism companies in developing countries that will not be able to withstand the competition.

Mike Waghorne of Public Services International, in a statement, said that the services negotiations would be disastrous if developing countries want to develop their own public services later.
"Under GATS, governments can regulate their services industry but a challenge from another member state could find such negotiations to be more burdensome to trade than is necessary, forcing the country to change its regulation or
face retribution. This impacts on municipal governments, not party to the negotiations,"
he said.

"The Washington Consensus forces them (developing countries) to privatize:the same forces use WTO pressure to get irreversible GATS commitments in these services," he added.
Chomthongdi said that this was the first time that local and international organizations from both the developed and developing countries are joining hands to move forward the campaign against services liberalization, and this "is a first step in a year-long campaign to the Hong Kong Ministerial."

The groups together with trade unions and activists in Switzerland, as well as civil society from around the world will be calling for a mass mobilization against the GATS in front of the WTO headquarters in Geneva on 17 February. 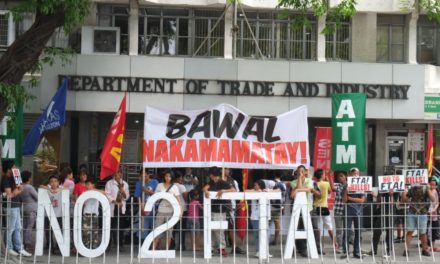 CONSTRUCTIVE ENGAGEMENT AND CONSTRUCTIVE INTERVENTION: A USEFUL APPROACH TO SECURITY IN ASIA PACIFIC

WAR, THE 21ST CENTURY & AMERICA’S FUTURE: FROM 9/11 TO HURRICANE KATRINA