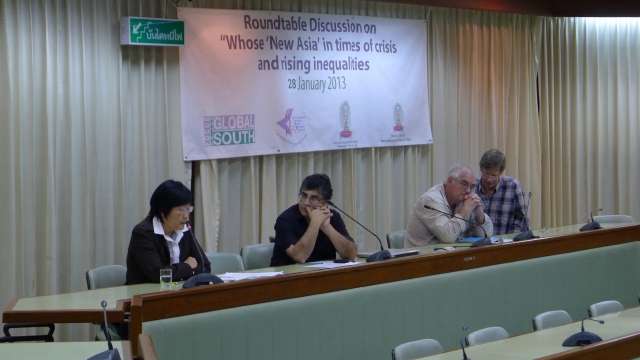 With the “US pivot” in Asia-Pacific, a divided Asean vis-à-vis the territorial disputes on Southeast Asian waters and an aggressive China stance, a global crisis and European “social decomposition” that is expected to further escalate before it stabilizes, an Asia-Europe as well as international social movements solidarity has become not only an imperative, but more so as urgent.

These were the key issues raised during the recent roundtable discussion organized by Focus on the Global, Chulalongkorn University Social Research Institute, CU Center for Peace and Conflict Studies and CU Master of Arts in International Development Studies, Whose ‘New Asia’ in Times of Crisis and Inequalities, in Bangkok, January 28.  Leading the discussions and exchanges were guest resource persons Philippine parliamentarian Walden Bello, who is also Focus’ senior analyst and current Board member, Pierre Rousset, President of Europe Solidaire Sans Frontieres, Patrick Bond, Director of Centre for Civil Society – University of Kwazalu-Natal in South Africa, Chantana Banpasirichote Wun’Gaeo, Head of the Department of Government, Political Science faculty of Chulalongkorn University, and Pablo Solon, Executive Director of Focus on the Global South.

Walden Bello highlighted in his sharing the erosion of US hegemony specifically in the Arab region as one of the impacts of the 2011-2012 people’s uprisings and downfall of dictatorships now collectively called Arab Spring. As a result of the weakening of this hegemonic power, other forms of “fissures have also been created,” said Dr. Bello. The legitimacy of the US involvement in Afghanistan is being questioned; while continued presence in said country has failed to earn popular support in US society.  Relations between the US and Pakistan are “strained” due to the former’s use of drones, even as US President Barack Obama finds itself “distancing from hard line Netanyahu policies,” according to Bello.  Increasing US role in Asia, specifically via the tensions arising from contending claims on the Spratly Islands and Southeast Asian waters, has now become an opportunity for the US government to “reconfigure its power,” Bello said.  The Philippine government opened this opportunity when it dragged the US to the conflict; and with a divided Asean and aggressive China stance, the issue has now gained “superpower dynamics,” Bello also explained.

Chantana, on the other hand, talked about Thailand’s aggressive economic development policy and how it can affect other Asian countries, especially in Southeast Asia.  Thailand, she said, has moved up to “middle income status” but it feels it hasn’t achieved “tiger-of-Asia status” so that it continues to push for a neoliberal economic agenda “to get on the last express train.”  The result is that the country has now become foreign investor in other Asian economies even as the “redistributive function of the state has weakened,” Chantana said, while also pointing out the “lack of collective people’s agenda in social mobilizations and political movements.”

From outside Asia, the global economic crisis is creating wider ripples and stronger currents that are reaching the region.  “The European crisis became an opportunity for capitalism to further attack and take revenge on welfare states system,” said Peter Rousset of European Solidarity without Borders.  Rousset said that “social decomposition” never seen or experienced before, not even as aftermath of the Second World War, is now taking place in the continent, as characterized by rise in “poverty immigration” and urban poverty; collapse of the European bourgeoisie which was put at the “center of the construction of the European Union”;  absence of social safety nets, such as family which in Asia still thrives even amidst crisis, and failure of recent political actions to create critical impact needed. The assault on workers’ rights in Europe, Rousett also stressed, is not a good harbinger of things to come in Asia and other parts of the world.  Rousett sees the crucial role of stronger solidarity between Asia and Europe’s Left and social movements to arrest this social decomposition and attack on labor, and to create a radical political experience that is needed by the movements now.

The capitalist class is on attack through “subimperialism,” with the European Union, US and African states now moving to include “natural capital” and “green growth” to fix “the deep crisis of capitalism,” was one of the key messages in Patrick Bond’s discussion.  Bond explained subimperialism as “neoliberalism in local economic policy” and as “regional platform of accumulation” of the above cited countries.  He also reproached the BRICS countries (Brazil, Russia, India, China and South Africa) for “talking left, walking right,” pointing specifically to Pretoria as now an “aspirant co-imperialist.”

Pablo Solon explained that these are the regional and global contexts of the so-called new Asia with its continuing economic dynamism yet persisting inequalities; these are also the issues that Focus on the Global South now confront as part of Asian and global social movements.# 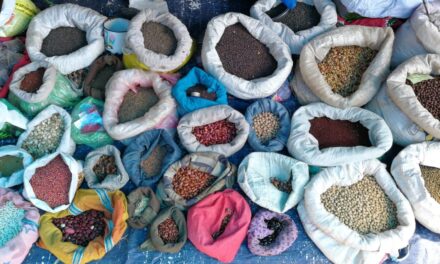