On behalf of the International and Ecuadoran Organizing Committees for the Inaugural Conference of the Network for the Abolition of Foreign Military Bases, we invite you to participate in this important global conference, which will take place in Quito and Manta, Ecuador, from March 5-9, 2007.
The conference aims both to highlight the political, social, environmental and economic impacts of foreign military bases and the grassroots movements that oppose them, as well as to formally construct the network, its strategies, structure and action plans.
We have seen how foreign military bases and other forms of military presence are used to secure the interests of a few at the cost of democracy, justice, sovereignty and self determination. But these bases and their destructive impacts are meeting with strong grassroots opposition, in Vieques, Korea, Okinawa, United Kingdom, Guam, the United States itself, and many other countries. It is these movements we wish to highlight and bring together for mutual support and strategies.
Over the past two years, movements for peace and justice have been building an international network that works for the abolition of foreign military bases around the world. The next step in consolidating this Network is the International Conference for the Abolition of All Foreign military Bases. We hope that this will be the biggest gathering of anti-bases activists to date. The main objectives of the Conference are:
·      Analyze the role of Foreign Military Bases and other forms of military presence in the strategy of global domination and its impacts on the population and the environment.
·      Highlight, share experiences, and solidarity with resistance struggles against foreign military bases in the world.
·      Reach consensus on objectives, action plans, coordination, communication and decision-making mechanisms for a global network for the abolition of all foreign military bases and other forms of military presence.
·      Establish global struggles and action plans that strengthen local and national struggles and the coordination among them.
The conference takes place over five days. On the first day, Monday, March 5, presentations and workshops will explore the geo-strategic context of foreign military bases and other foreign military presence, their role in the empire’s goals, the diverse impacts of military bases, and the movements to close them.
On the second and third days, the conference will run on two tracks. The first, open to as many participants as register, will consist of presentations, workshops and films to deepen participants’ knowledge of military bases and anti-base movements; some of these will be self-organized, others put together by the conference organizers. A second track will work to formally establish the anti-base network.
The fourth day of the conference is International Women’s Day, and, led by Ecuadoran women’s groups also opposed to military bases, we will travel by caravan from Quito to the port city of Manta, stopping in communities along the way. The fifth day of the conference will represent joint action by international and Ecuadoran participants, with a focus on the US military base in Manta.
In addition, there will be cultural events during conference evenings, when we hope to share expressions not only of Ecuadoran culture, but that of other cultures present. Activists will bring back from the conference joint plans, ideas, contacts, solidarity, and inspiration to support your critical struggle at home against military bases.
During October we will announce on-line registration for the conference, at http://www.no-bases.net. Meanwhile, you can sign-up at the site to receive conference updates. For now, we urge you to make plans to participate in this critical gathering.
We look forward to seeing you in Ecuador.
Asociación Cristiana de Jovenes (Ecuador)
Fundación Regional de Derechos Humanos (Ecuador)
Servicio Paz y Justicia (SERPAJ-E) (Ecuador)
Confederación de Nacionalidades Indígenas del Ecuador (Ecuador)
Movimiento Tohallí (Ecuador)
Paulina Ponce Comisión Ecuménica de Derechos Humanos (Ecuador)
Grupo de Objetores de Conciencia (Ecuador)
ALTERCOM (Ecuador)
Clínica de Derechos Humanos – PUCE (Ecuador)
American Friends Service Committee
US Peace Council (US)
Nonviolence International (US)
American Friends Service Committee (US)
Gathering for Peace (Filipinas)
Centro Memorial Martin Luther King Jr (Cuba)
Cuban Movement for Peace and and People's Sovereignty (Cuba)
Campaign for Demilitarisation of Americas (Latin America)
Focus on the Global South (Thailand, Philippines, India)
Fellowship of Reconciliation (US)
LALIT (Diego Garcia / Mauritius)
Transnational Institute (Netherlands)
Asian Peace Alliance – Japan
Japan Peace Committee (Japan)
For Mother Earth (Belgium)
Pakistan Peace Coalition (Pakistan)
Campaign for Nuclear Disarmament (UK)
World Peace Council 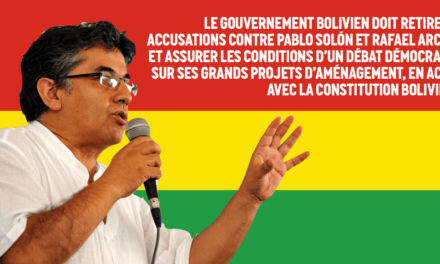