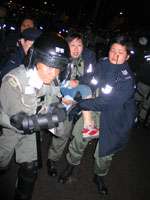 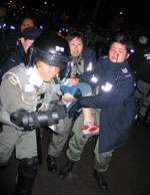 HK police arresting an activist
On December 17 (yesterday) afternoon, thousands of representatives from farmers, fishers, workers, migrants, women’s, students and other civil society organizations marched from Victoria Park to the Hong Kong Convention and Exhibition Centre in a demonstration to protest against the destructive policies of the World Trade Organisation (WTO).  At around 5.00 pm, they were stopped by the police, who used pepper spray, water hoses and eventually, tear gas, to disperse them.  Many demonstrators were injured and some were hospitalized.
After this, at least 900 demonstrators sat peacefully on Gloucester Road, singing songs and dancing, but were surrounded on all sides by the police in full riot gear for over ten hours.  By 3.30 am this morning, the police started to arrest the demonstrators and the arrests are continuing into today.  Reports from the legal support group and those arrested reveal that those kept on Gloucester Road were not allowed food, water and bathroom facilities; many were constrained in extremly painful handcuffs and some were even strip-searched.
We, coming from organizations, social movements and networks from across the world, denounce the actions of the police, and strongly protest against the use of such excessive force against the demonstrators and the inhuman treatment of those arrested.  We stand in complete solidarity with the demonstrators, who have been so deeply and desperately impacted by the systemic violence of WTO policies.
We urge all members and delegates of the WTO to join us in calling for the immediate release of these political prisoners.
STAND BY THE PEOPLE!

see video of the action>> 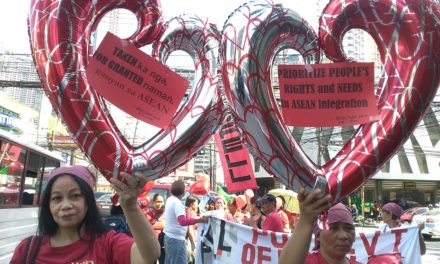 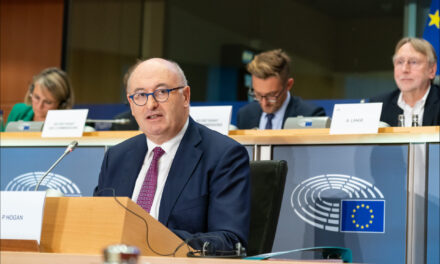 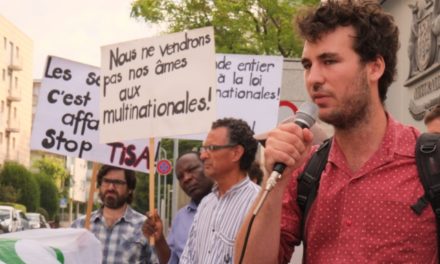