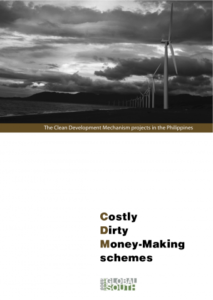 The Clean Development Mechanism (CDM) is a scheme under an international climate change agreement that allows developed countries to buy “credits” from projects that supposedly reduce greenhouse gas emissions in developing countries, instead of cutting their own emissions domestically. In so doing, the scheme claims to be mitigating climate change while also promoting sustainable development.

An evaluation of existing CDM projects in the Philippines as of June 2009, however, raises questions as to whether the scheme is in fact undermining its own purported aims: Most of the “credits” being generated will go to projects that further exacerbate climate change and compromise sustainable development, enriching large conglomerates that are expanding extractive and fossil fuel-intensive activities, in pursuit of objectives that could otherwise be achieved through more effective government regulation and community action. Rather than allowing governments and communities to embark on a just transition towards a more sustainable path, the CDM is rewarding government ineptitude and supporting the very agents that contribute to climate change—while allowing rich countries to continue avoiding the reductions necessary to mitigate climate change.