Moving Forward: Study on the Impacts of the Implementation of Order 01BB in Selected Communities in Rural Cambodia 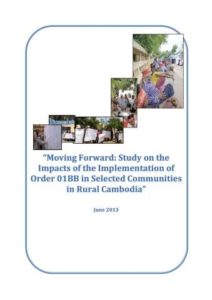 In late June and early July 2012, more than 1,000 student volunteers were dispatched to targeted provinces across the country, accompanied by officials from the Ministry of Land Management, Urban Planning and Construction (MLMUPC), to implement Cambodian Prime Minister Hun Sen’s Order 01BB.  The student volunteers were trained in basic measurement techniques, kitted out with military uniforms bearing the MLMUPC’s logo, transported by army trucks, and directed to measure land and grant land certificates to rural residents. This land titling campaign was the personal initiative of Hun Sen and as such received support from all levels of government. Funding for the campaign came from Hun Sen and his wife, as well as from key members of the ruling Cambodian People’s Party (CPP).

In order to understand the effectiveness of Order 01BB in addressing land conflicts in the country, Focus on the Global South and the Heinrich Boell Foundation supported a study to document its implementation in selected areas. The main goal of this study is to shed light on the positive and negative impacts of the programme on people in rural communities. While the study is not comprehensive, it does provide an important snapshot of what is arguably Cambodia’s most ambitious land titling initiative in years.

Although the study was completed in June 2013, it has taken several months to prepare it for publication.

Available in English and Khmer