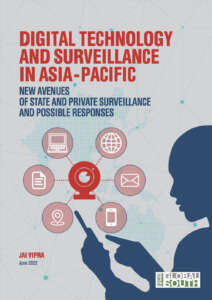 23/06/2022
Under: Asia/World, Peace and Security, Power and Democracy, Publications, Reports

New Avenues of State and Private Surveillance and Possible Responses

Surveillance has long been one of the primary threats to political and economic activism. Emerging digital technology interacts with the practice of surveillance to strengthen and broaden it, leading to retaliation and creating a chilling effect that protects entrenched interests. This report examines the role of digital technology in changing surveillance practices in the Asia-Pacific region, with a focus on Philippines, Thailand, India and Cambodia. It situates both state and private surveillance in the political context of these countries, and describes the nexus between the two. The report also elaborates upon the impact of the Covid-19 pandemic on surveillance in these countries.