Hong Kong, 16 December 2005: A large group of farmers movements and NGO’s,members of the  Food Sovereignty Network have staged an act in the Convention Center that portrays Lamy as he really is : a sorcerer with a box full of illusions.
Pascal Lamy, WTO Director General opened the Ministerial Conference with his “magic wand,” claiming he will use it to move the Doha Round Package, regardless of bickering among member countries.

However, the only magic that the powerful countries are using is illusional language, such as “aid for trade” and “duty-free / quota-free market access” for Least Developed Countries (LDCs) to claim that there is development in the Doha Round.

"Lamy has now admitted that the WTO is an institution that uses smoke and mirrors to force free trade, not a legitimate institution that is an ally of developing countries or the citizens of the world.” Says Andrianna Natsoulas of Food and Water Watch of the U.S.
The U.S. trade representative Robert Portman promised an aid package to developing countries. But George Naylor of the National Family Farm Coalition and representative of La Via Campesina said : “Least Development Countries should not be fooled about the chicken feed offered, compared to what they will lose in terms of their food sovereignty and economic development with the current package” Furthermore, Portman admits that U.S. aid for trade will go through the millennium challenge account, the primary purpose of which is to enforce market liberalization on aid receiving countries.
There are clearly no “convergences” as Lamy’s framework text claims. The reality is that there are deep disagreements among WTO members about what would constitute a success in this ministerial; therefore, they plan on repackaging the proposals on the table and presenting them as a consensus 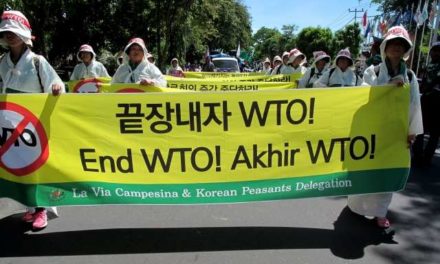 The WTO pushes through bad deal in the final hours; Developed countries and TNCs are the big winners