Miami, Nov. 20. The United States will try to paint the Miami meeting of the Free Trade of the Americas (FTAA) as a success, but the reality is that the anti-FTAA side has pulled off a victory. This was the assessment of movement leaders as thousands of protesters from all over the Americas converged o­n this city for Friday’s March for Global Justice and the Miami-Dade Country police mounted a massive show of force to intimidate the opposition.

That the people were not cowed was evident at the "Gala for Global Justice" on the evening of Wednesday, November 19. Opposition to the FTAA and people coming together for "another world" was the theme of event, which featured a program of music and speeches from activists from throughout the Americas. Representing the US labor movement in the program, Leo Girard, president of the United Steelworkers Union, declared, "We will not let them steal our sovereignty. This is not just about trade but also about investment and privileges for greedy investors and financiers. This fight is a fight for our children and grandchildren." He singled out the contribution of student activists against sweatshops, telling the story of how earlier in the afternoon, "on the way to Guzman Park to attend the People’s Forum, we saw a group of students surrounded by cops and searched. And guess what, hundreds of steelworkers surrounded the cops and told them to let the students go. And they did." And that brought the crowd to its feet.

The big news on Wednesday, however, was the scrapping of the original FTAA vision. "The US wanted a binding comprehensive agreement with disciplines all the way through," said one official delegate from a Latin American country who has participated in the negotiations. "The draft ministerial declaration coming out of the Trade Negotiations Committee clearly is a retreat from that."

Instead, the draft proposes a "flexible" process where governments can decide to exclude some areas from FTAA negotiations for liberalization even as other governments negotiate liberalization in these areas. As the declaration unambiguously states, "Ministers recognize that countries may assume different levels of commitments…In addition, negotiations should allow for countries that so choose, within the FTAA, to agree to additional obligations and benefits."

This will allow Brazil and the other members of the Mercosur trade area to withdraw from negotiations on investment, intellectual property, government procurement, services, investment, competition policy, and other areas they do not wish to subject to mandatory liberalization. At the same time, it will allow the US to continue its policies of massive subsidization of its agriculture by not joining negotiations on agriculture. The result is what pundits have called "FTAA lite" or "FTAA a la carte."

Essentially, the ministerial declaration is the one tabled by Brazil at the Trade Negotiating Committee meeting in San Salvador last July. As the Latin American negotiator put it, "Brazil was saying, look, 2003 is different from 1994, when Clinton launched the FTAA negotiations. Free trade policies has brought about bad results throughout Latin America. People have ousted neoliberal governments. There was no way the US was going to get the comprehensive free trade agreement it wanted today."

To the surprise of many, the US agreed to the Brazilian compromise a few weeks before Miami. But, according to the Latin American negotiator, the alternative was another Cancun, referring to the collapse of the fifth ministerial of the World Trade Organization, owing to widely disparate positions between Brazil and its allies and Washington, Canada, and their supporters. This was not another high-profile setback the Bush administrator could afford coming into an election year.

Despite the US stand-down, says Timi Gerson, a trade campaigner with Public Citizen, it will paint Miami as a success. "They’ll say the train has not be derailed, as in Cancun, that it is leaving Miami with nine boxcars or negotiating areas intact. What they’ll try to conceal is that those boxcars are empty because people throughout the Americas have refused to go aboard."

To counter Washington’s spin on events while calling for continued vigilance among FTAA forces, the broad alliance Continental Campaign against the Americas issued the following statement on Wednesday, May 19, shortly after the appearance of the draft declaration:

"We are witnessing in Miami the failure of the original FTAA project, and at the same time the emergence of a new and perhaps more dangerous proposal for negotiations.

"The United States will try and present the ‘flexible’ proposal to move the negotiations forward as a success of the Ministerial Meeting. But this is only a fa็ade…Miami has revealed that the United States has lost its capacity to convince people of the virtues of its ‘free’ trade project, and is using force to impose its objectives, trying to isolate the governments of the continent that are proposing a different vision."

To Brazilian trade organizer Fatima Mello, although the original FTAA vision has been disrupted, "So long as the FTAA’s framework and basic principles remain intact, the imposition of neoliberal trade policies will remain a threat, so it is important to oppose even this watered-down version of the FTAA."

To cover its tactical retreat on the FTAA, US Trade Representative Robert Zoellick announced on Wednesday that Washington would launch negotiations for bilateral free trade pacts with the Dominican Republic, Panama, Bolivia, Colombia, Ecuador, and Peru. To Sarah Anderson, trade analyst of the Institute for Policy Studies in Washington, the US move is a confession of weakness. "They’re admitting they can’t get what they want via the FTAA, and that’s because people and governments are resisting throughout the Americas."

*Walden Bello is executive director of Focus on the Global South and a member of the Board of Food First. 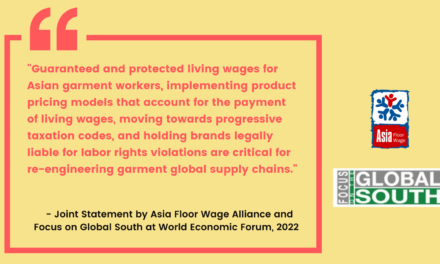