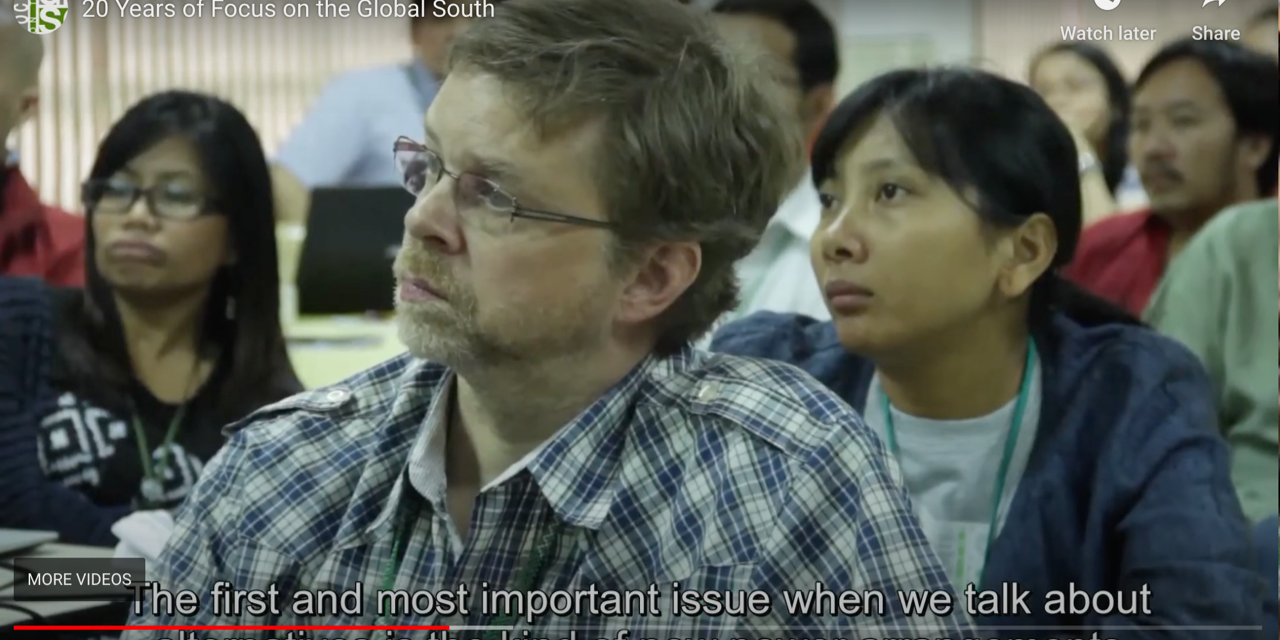 Soren Ambrose at Focus on the Global South's 20th anniversary event in 2015.

Focus on the Global South joins friends and civil society from across the world in paying homage to Soren Ambrose, who died on December 5, 2020. For over two decades, we have known Soren as an unshakeable activist and resolute critic of the Bretton Woods institutions. His sudden passing has taken away a dear and warm comrade who was a co-traveler with us in the struggle for a just and equitable world.

Here, Focus colleagues write about Soren, recalling the fond memories and the many dimensions he brought to the global justice movement.

Nicola Bullard
Soren loved words. He used language with terrific clarity as a tool for explaining, educating and mobilising. He also used words to defuse tensions, to build friendships, to create alliances, and simply to make people laugh.

I remember working with Soren drafting a statement following the World Bank/IMF meetings in Prague in September 2000 when, memorably, the Tutti Bianci, the Black Bloc and every colour in between, surrounded the conference centre, blocking delegates and staff from leaving the building. The meeting was forced to close ahead of schedule, and we were happy to claim a victory. We had fun that evening, writing the text over beers.

Last week, I listened to a Valentine’s Day interview with Soren and Njoki, entitled “Love in the fight against inequality”. It was so lovely to hear the chuckle in Soren’s voice and the interplay between him and Njoki.

Walden Bello
I knew Soren to be a comrade who combined a keen mind with superb writing skills and a warm friendly nature. He was absolutely dedicated to the anti-globalization cause and the World Bank and the IMF could find no more formidable foe. Soren was one-half of a “power team.” The other half was his partner Njoki. Few in the movement could resist their combined charm and persuasiveness. And as for the paid hacks of the multilateral organizations, the duo represented such tremendous firepower that retreat for them was the better option than engaging the two either in debate or in the streets.

Shalmali Guttal
I first met Soren 20 years ago when I became active internationally in campaigning against the World Bank and IMF. Over the years he became a close ally and friend, who could be trusted to provide accurate, well-researched analyses on global finance, International Financial Institutions, debt and development. I was always impressed by the breadth of knowledge and clarity that his writing reflected. His gentle personality, dry humor and soft chuckles were good camouflage for his incisive attacks against global capitalism and its agents.

We also had a lot of fun: marches, events and actions were accompanied by meals and drinks with various combinations of activists from around the world. Soren and Njoki created warm and vibrant spaces for activists to learn from each other and build solidarity across borders, generous in both spirit and support. Soren had a special knack for pointing out the absurdness of conflicts in our culturally disparate community of anti-globalisation fighters, building bridges wherever he could.

When Focus on the Global South turned 20, Soren came half-way across the world to cheer us on and reconnect with old comrades. Our collective, international movement for peace and justice will certainly feel Soren’s absence. More than that, I will miss Soren as a friend.