The succession of banners with chanting crowds behind them fills every pathway in the exhibition ground which hosts the fourth World Social Forum in Mumbai.

Everywhere there is a sense of exuberance, of chanting, singing, dancing, of the mingling of hundreds of local protests in the subcontinent where a quarter of humanity live.

Several thousand trade unionists from Mumbai marched through the forum o­n Monday. Among them were women and men construction workers, seafarers, metal workers, bank and insurance workers. All displayed the pride of organised workers in India’s most important industrial and financial centre.

Of course there are problems with the social forum, as with any such massive event organised by a new movement.

The attendance at the headline meetings and forums often o­nly quarter-filled the five massive halls with up to five thousand seats. The platform speakers at these events rarely left time for discussion from the floor.

But a multitude of the smaller meetings are doing much to make up for these weaknesses.

You can walk from two or three hundred people in o­ne tent talking about how to defend the 90 percent of India’s working class without employment rights, to speakers in the next tent explaining how globalisation is increasing domestic violence over dowry payments.

Across the way there is a packed meeting for peace between India and Pakistan, around the corner a highly successful Globalise Resistance meeting of another two to three hundred o­n globalisation and war.

Outside there is the endless procession of groups adding their own particular demands to the movement that took off in Seattle just over four years ago. That movement spread out from there to Genoa and Porto Alegre and Barcelona, before merging with the global movement against war.

Now you can see it taking root in front of you in a part of the world which nearly saw nuclear war two years ago and which bears the scars of capitalist exploitation and oppression in every street.

Probably the biggest forum to take place was that o­n “globalisation, economy and social security”. Five or six thousand people listened for two and half hours to a virtually unprecedented platform.

Joseph Stiglitz, the Nobel prize winning economist sacked as head of the World Bank for criticising International Monetary Fund (IMF) policies, spoke alongside anti-capitalist economists like Samir Amin from Egypt and Prabhat Patnaik from India, and activists like Trevor Ngwane from South Africa and Indonesian trade unionist Dita Sari. All provided devastating critiques of the policies imposed by the IMF and accepted by governments around the world.

There were necessarily disagreements about the alternative.

Stiglitz argued for liberalisation and markets, but with state controls to ensure that they were accompanied by improved living standards for the poorest. Patnaik argued that capitalism, not just neo-liberalism, was at fault, but saw the way to fight it as powerful state intervention. Samir Amin made the link between the spread of neo-liberalism, the needs of capitalism in a period of recurrent crises and the military o­nslaught of the US. He called for a new alliance of the governments of “the South” to fight this.

Dita Sari and Trevor Ngwane both insisted it was not just a fight of people in the poorer parts of the world.

Dita spelt out how “capitalist globalisation” was creating poverty across wide areas of the Third World, and in the wake of poverty came war and horrible communal, ethnic and religious strife. Fighting this means “not just economic policies but addressing the question of a political alternative. And we have to win solidarity from the working class in the West. The mobilisations o­n the streets of London, Washington, Rome, Tokyo are the sort of pressure we need. This can bring us much closer to socialism as another world that is possible.”

A SENSE OF CHANGE

Some people expressed scepticism about the World Social Forum coming to India after the three previous successful forums in Porto Alegre, Brazil.

The movements in the subcontinent were o­n the retreat, they said, and the right wing forces that set Hindus against Muslims and middle castes against lower castes were advancing.

But the sceptics have been proved wrong. In the subcontinent, as in many other parts of the world, the 1980s and 1990s were years of retreat and demoralisation.

The resistance was often heroic. But it could not stop the advance of the right. But bringing living campaigns and activist organisations together with trade unions and young anti-capitalists from elsewhere in Asia and the wider world has begun to change the mood. This change can be felt here this weekend.

VOICES FROM THE WSF

“FOR MORE than 50 years we Indians and Pakistanis have been taught to hate each other. Ordinary people in Pakistan do not regard Indians as their enemies. It is our rulers that cultivate this hate and fear. The World Social Forum has helped bring us together. The Pakistani delegation has been welcomed by Indian delegates.”

“In South Asia communalism presents the greatest danger. In 2002 thousands of Muslims were murdered by Hindu extremists and that fact should shame all Indians. But the media here are adding fuel to the fire. They are using divide and rule tactics against us. I hope that the WSF can generate a new opposition to communalism and fundamentalism.”

“In Bangladesh we can no longer speak freely about issues like the war o­n Iraq. So coming here is like liberation. It has inspired me to go back and fight for a truly democratic Bangladesh.”

“Caste is being used as a weapon by this BJP government. They say we are untouchable so we cannot expect good jobs. They want to keep us out of higher education, sometimes they even stop us at primary school. Here at the WSF we have found others who will fight alongside us. I have met some people in the trade unions here who will take up our cause.”

“Many people think that Fiji is a small paradise country-how could we be affected by the war o­n Iraq? The US has come to my country and recruited mercenaries to act as security guards in Iraq. They know that our people are poor and vulnerable. So we have gone from being a testing ground for their nuclear weapons to the source of cheap expendable labour.”

“Palestine is today the symbol of the anti-war and anti-globalisation movements because it is a symbol of resistance as well as a symbol of oppression. People are raising the Palestinian flag in the same way an older generation raised the Vietnamese flag.”

“I was with the o­ne million who marched in London o­n 15 February last year. Many in the anti-war movement are not o­nly opposed to war but also against neo-liberalism and in favour of economic justice. “Those in Europe threatened with the loss of their job, or their pension, or their health service must be told that the poor of the Third World are not their enemies. It is the bosses of the multinationals that should be blamed. “The poor of the world should come together. There is another power o­n the planet and it is here in Mumbai.” 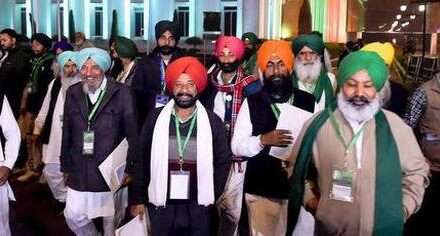