Presentation by Joseph Purugganan at the plenary “How to get rid of TTIP and other bilateral free trade agreements” at the European Summer University (ESU) in Paris. For more information about the panel, click here.

How to get rid of the Transatlantic Trade and Investment Partnership (TTIP) and bilateral trade agreements is the central question for this panel. The answer, I think, lies in having first a better understanding of what exactly we are facing, as progressive and social movements in the sphere of global economic policy.

When the TTIP or TAFTA [Transatlantic Free Trade Area] Agreement negotiations were launched in February 2013, it signaled not just an intensification of the de-facto turf war among major players in global trade (the EU and the US against the rest of the world), but also a scaling up of an economic agenda to define the trajectory of global economic development.

There is a consensus around the so-called post-2015 development agenda that is being pushed aggressively. This is how I would view the TTIP, TPP, EU FTAs, and to a certain extent, the lesser-known Regional Comprehensive Economic Partnership (RCEP) talks being led by China in Asia: as instruments of a much broader economic agenda that seeks to further entrench corporate/elite capture of the economy, an agenda that will deepen further inequality, erode peoples’ rights and lead to more destruction of our planet.

The specific contribution that I want to make to this panel is to share a view from Asia. Asia has become the main driver of global economic growth. To a large extent, these developments on the free trade agreement (FTA) front are also motivated one way or another by the desire to get a slice of the action in Asia.

There has been a lot of talk about Obama’s “Asian pivot,” the shift in US foreign policy aimed at refocusing on Asia, and the underlying motive of counter balancing China’s growing power and influence in the region. On the economic front, the Asian pivot is evident in efforts to conclude the TPP and the new agenda for a much broader Free Trade Area of the Asia Pacific under APEC.

Asia is valuable in the equation because of its growing market; many of the countries in East and Southeast Asia continue to experience high growth rates of between 3-6%.

Asia is valued for its raw materials; countries like Cambodia, Laos and Myanmar, for example, are already starting to ease restrictions on foreign ownership and control of land, water and natural resources, and there continues to be a mad scramble for control over these resources. We see increasing conflict over these resources pitting communities against corporations with governments taking the side of transnational corporations (TNCs) to protect investments. We see rising human rights abuses; killings of activists, of indigenous leaders, human rights defenders and a criminalization of dissent.

What are the main elements of the post-2015, 21st century trade and investment agenda?

At the center of the strategy is the aggressive push for what has been alternatively called new generation FTAs. In the European Union, they are called competitiveness-driven FTAs, or now these agreements that span across continents are increasingly called mega-regional FTAs.

The most basic thing to understand about these proposed new agreements is that they are no longer about trade and trade alone. They encompass a whole range of economic policies that push for market liberalization of goods and services, stronger and more restrictive intellectual property rights, but also the easing of restrictions on investments, and greater investor protection. These agreements push for greater connectivity both in terms of infrastructure and technology. These agreements lock in economic policies to terms that serve the interests of transnational corporations and their global production networks. What do we make of this talk of 21st century trade?

The argument that is being advanced is that the trade and investment challenges today are different from those of the past 70 to 100 years. Whereas the emphasis before was on pushing for the liberalization of markets, slashing tariffs, and later on locking in trade policies under “free trade” agreements, the concerns now revolve around sustaining and deepening trade openness and fostering connectivity (under global production chains) and the harmonization of regulations (coherence).

The World Bank (one of the global institutions pushing for this new Consensus) has clearly spelled out the imperatives for putting in place a new global trade and investment regime. The first goal is to maintain existing levels of openness, make sure that the protectionist tendencies that emerged after the global economic crisis are effectively curbed. Second is to make sure that the failure of countries to effectively maintain the open regime is challenged at every occasion, maximizing the mechanisms that exist to settle trade and investment disputes (i.e. the WTO’s Dispute Settlement Body, ISDS mechanisms under ICSID, the ICC and UNCITRAL) to bring countries in line. This is the “whip” component of the strategy. And last but not the least is to negotiate new agreements to deepen cooperation and increase openness.

TTIP and TPP are really envisioned to be “game changers” in the field of global policy. The standards that these agreements are aiming to establish are not just in terms of market liberalization, but also intellectual property rights, investment regime and investor protection, and regulatory coherence. These standards established under bilateral and/or multi-party negotiations will be the “gold standard” for all future FTAs. In the WTO, there are already talks of “multilateralizing” some of these standards.

The second element of the agenda is the push for the concept of the global value chain. According to Professor Richard Baldwin, a proponent of so-called 21st century regionalism: “many 21st century regional trade agreements (RTAs) include provisions unrelated to tariffs or other border measures. This is because 21st century RTAs are at the same time trade agreements and production-sharing agreements. The trade aspects reduce barriers to selling foreign-made goods. The production-sharing aspects lock in disciplines that facilitate the “internationalization” of production – especially between high-tech and low-wage nations.”

The logic that is being advanced is that trade, under a liberalized, interconnected world made up of a fragmented global production system, is now more about “tasks.” If you are an exporter of minerals like the Philippines or Myanmar, then that is your task; or if you rely on exports of garments like Cambodia or Vietnam, then that is your task. Your economic policies therefore should be geared toward making sure that you are able to perform these tasks.

TNCs of course dominate the global value chain discourse because the TNCs have the capacity for ownership and control over all aspects of the integrated production network.

The last aspect of the global economic agenda that I want to highlight is the push for trade in environmental goods and services (EGS), estimated to be worth around US$600 billion. This liberalization agenda is being pushed in the WTO as well as APEC under the broad mantle of the “green economy,” in the name of addressing climate change and in pursuit of so-called Sustainable Development Goals.

But here is the catch. Because developed countries have by and large already liberalized their market for EGS, the renewed calls for liberalization mean that the developing countries are the ones that have to make the greater commitment. This would entail not just cutting or altogether eliminating tariffs on EGS, binding a greater number of products and services, and eliminating of non-tariff barriers, but also reforming regulatory policies on services that promote domestic interests over foreign one, which are deemed barriers to trade.

This is the broad range of issues that we confront beyond the question of TTIP and other bilateral agreements. The main challenge is how to confront the increasing corporate and elite capture of economic policies.

Because the agenda is broad, the resistance should be as well. We should – as is already being done in many parts of the world – build and strengthen broad movements to push back against this consensus and agenda.

We need to continue to engage in political education work, in activist research to strengthen the articulation of peoples’ critiques and alternatives.

We need to continue to build broad platforms of resistance against these agreements and instruments, but also against the economic paradigm that is being pushed.

We need to maximize spaces for people’s participation in trade and investment policy-making.

What is now happening across the globe – with governments initiating reforms of investment policies, reviewing and auditing their bilateral investment treaties – should be monitored, and effective public pressure should be exerted to make sure that the processes move in the right direction.

We also need to take note and push the envelope further on legal instruments like the Binding Treaty for TNCs at the United Nations. This presents an opportunity to further challenge TNC domination of the economic agenda and exacting real accountability for human rights abuses. We are part of, for example, the Global Campaign to Dismantle Corporate Power and End Impunity. I believe there are strategy sessions here about how to move the campaign forward, and I encourage everyone interested in resisting TTIP and pushing back against the broader corporate economic agenda to take part in these discussions. 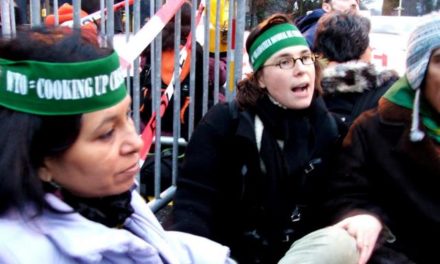 Square Pegs in Round Holes:The World Trade Organisation and Democracy 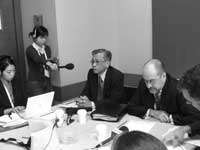