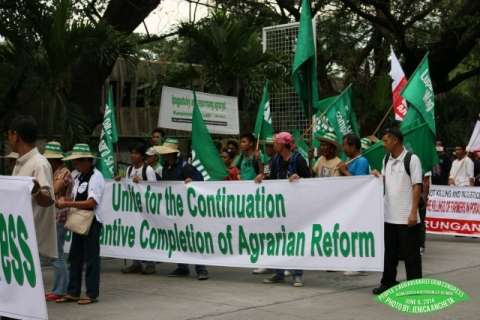 Justice for Yolanda victims and survivors.

This was the message of farmer leaders from the Save Agrarian Reform Alliance (SARA) to the Department of Agrarian Reform (DAR) as they joined 100 fellow farmers from Leyte and other provinces in a lightning rally to demand for an effective and swift implementation of the Comprehensive Agrarian Reform Program (CARP).

On the eve of People Power celebrations, SARA leaders emphasized that access to and control of land resources is at the front and center of the rehabilitation and recovery process.

“The protracted and piecemeal implementation of the 26-year year old CARP, which was later on amended by Republic Act 9700 or CARP Extension with Reforms, is exacerbating pre-existing insecure situation in Yolanda-affected areas”, said Trinidad Domingo, spokesperson of Save Agrarian Reform Alliance and a rice farmer from Nueva Ecija, where typhoons and disasters regularly hit.

According to SARA, DAR’s data initially reveal that there are 128,369.21 hectares of land that should have been acquired and distributed by government in the provinces affected by Yolanda.

Half of these affected areas are in Region 8 and close to 20 percent in Masbate, one of the top provinces with large land distribution backlog. (See table below)

However, one of its members, RIGHTS-Network, a land rights advocacy group doing local organizing work in Leyte and the Yolanda corridor, uncovered that previously reported accomplishments of DAR Region 8, especially in Leyte, are highly questionable.

“DAR Region 8 reported that the agency has distributed 11,685 land titles to about 8,000 farmers but upon verification on the ground, Yolanda survivors who were the supposed beneficiaries have not received any land title or Certificate of Land Ownership Awards (CLOA) or even installed in their lands”, said Baby Reyes, project officer of RIGHTS-Network.

“They were shocked to learn that DAR Region 8 had put 17,000 Yolanda survivors in Alangalang, Barugo, Jaro and Ormoc in its list of CLOA recipients in the 1990s.”, added Reyes.

Further, CLOAs serving as land titles and proof of ownership are required by the National Housing Authority so that applicants can be included in the list of those who can avail of government support for housing and livelihood.

But under such policy, landless farmers are deprived of government support. In Ormoc, even CLOA holders who have not been installed in their farms have been denied livelihood support.

“How can we rebuild our homes when the land where we use to live on and plant our crops are being contested by other claimants even if we already have land titles.”, lamented Rosenda Apay, a farmer leader from Ormoc, Leyte.

Evacuated victims/survivors of the Yolanda continue to experience land tenure insecurity since most of them could no longer go back to their previous areas of residence, which were also their areas of livelihood.

Coconut and rice farmers as well as fisherfolk are uncertain whether they will still be allowed access to their previous communities and sources of income/livelihood. Contestations over lands are intensifying and might result into further conflicts as government-private sector reconstruction projects are eyed for real estate development that will not necessarily help or benefit the disenfranchised victims/survivors of Yolanda.

“The DAR and other government agencies must work double, triple time so that Yolanda victims will not experience more injustices. The protection of the tenurial rights of farmers, fishers and forest people in the context of climate change and disasters must be a high priority of government. They should ensure that displaced communities are not left out of the process of re-registration, retitling, and reconstructing records on land claims and ownership. P-Noy must be ultimately accountable on this issue.”, stressed Domingo. Farmers from Leyte, Bondoc Peninsula, North Cotabato, and Negros island are staging a camp out in front of the DAR to pressure the government to put an end on their landlessness.