Thomas Sommer wrote this dispatch on Saturday 29 May, less than 36 hours before the deadly Israeli attack on the Free Gaza Flotilla. Thomas, along with hundreds of peace activists, was subsequently arrested and detained by Israel. The majority have now been deported and the funerals of the nine Turkish activists killed in the attack will be held today, 3 June. Four Israeli Palestinians remain in custody and two Turkish citizens are too severely injured to travel home.

Maybe one day, someone will write the full story of this adventure. There will be a lot of laughs, some real shouting and a few tears. But what I can tell now is that we never imagined that we would make Israel freak out like this.

To begin, they created an emergency task force gathering the Israeli Foreign Ministry, the Israeli Navy and Commandos and the prisons authorities to handle the existential threat that we, and our few boats of humanitarian aid, represent. Then, Ehud Barak himself took the time in his busy agenda to warn us through Israel media. Now they are announcing that they will send us to the worst prison in Israel, in the desert near Beersheba.

These announcements are meant to make us afraid. And in a way, we are afraid. We are afraid of their warships, afraid of their Apaches and their commando crews dressed in black. Who would not be? We are afraid that they will seize our cargo and all the medical supplies, the construction materials, the prefab houses, the school kits, and destroy them.

All this solidarity patiently gathered in so many countries during more than one year. All these efforts and this wave of love and hope sent by normal people, humble citizens, from Greece, Sweden, Turkey, Ireland, France, Italy, Algeria, Malaysia. Who would not feel the responsibility, and at the same time the fear, of not being able to complete our work and deliver the cargo to the jailed people of Gaza? But we know that there is also fear on the other side.

Since the beginning of our coalition, the State of Israel has been doing whatever it can to avoid a confrontation with us: they tried to stop us sailing and they tried to divide us. Their ideal scenario was to split our coalition, separating from each other the Irish, the Greek-Swedish, the Americans and the Turkish. Of course, they knew that they could not put pressure on Turkey, nor could they act directly in Turkey, so they concentrated their attack on the Irish and Greek sides of our coalition.

First, the Irish cargo was forced to delay its departure for nearly a week and there are strong suspicions that the boat was sabotaged. But, the Irish repaired the damage as fast as they could and now they are about one or two days behind us. Then, apparently Israel put huge pressure on the Greek government, which is weakened by the economic crisis, to not let the Greek cargo and the Greek-Swedish passenger boat sail. Because of these pressures, we had to delay our trip two times and ask the Turkish comrades, their 500 passengers and the American friends who were ready to sail to wait for us. Which fortunately they did. Until the last minute before their departure from Greece we were not sure if the two boats would get the authorization, but finally the Greek government gave permission for the cargo and the passenger boats to leave the port of Piraeus in Athens.

Yesterday (Friday 28 May) there was another setback in Greek Cyprus, where we had arranged with the government to pick up a VIP delegation of European and national parliamentarians from Sweden, England, Greece, and Cyprus. The two boats from Greece, the American boat from Crete and the four Turkish boats were already at the meeting point waiting for the VIP delegation, when we received the news that the delegation was surrounded by the Cyprus police in the Port of Larnaka and forbidden to move anywhere. As we began to negotiate with the Cyprus government, it seemed that this sudden change in the attitude toward us was dictated directly by Israel. From seven in the morning until dawn, the Cyprus government kept stalling, telling us that it was just a bureaucratic question that had to be solved. But nothing happened and our parliamentarians were trapped and we were losing crucial time.

This morning, Saturday 29 May, the VIP delegation decided that the only option was to go to the port of Famagusta in the North of Cyprus under Turkish control and from there take a speed boat to reach us in at the meeting point. Of course, because our coalition includes Turks and Greeks and Cypriotes, North Cyprus — which is under Turkish occupation — is a very big political question. And sending our delegation to take a boat from the port of Famagusta, which is under a UN embargo, is an even a bigger political question. This could have broken the back of our Greek and Cypriote friends in the coalition. It nearly did. But in the end it was the opposite: our coalition holds still. It is the Cypriot governing party which is about to split, and the seven Greek and Cypriot MPs who were part of the delegation and could not go to the North of Cyprus are furious against the Cypriot government. A huge debate is going on now in Greece and Cyprus about what happened, but in one or two hours almost all of the VIP delegation will embark on our boats and we will sail to Gaza as we planned.

The next few hours is the last, crucial stage, as we will enter the Gaza waters. Of course, materially it would be very easy for Israel to stop and arrest us, but the political cost will be high because all the obstacles that they have tried to put in our way have achieved only one thing: it has ensured that people from all over the world know about our flotilla and the situation of Gaza. And from all of this, we learn something; the fear is not on our side, but on the side of Israel. They fear us because we represent the anger of people across the globe who do not support what the State of Israel is doing to the Palestinians, we represent every peace lover who dares to take the side of the oppressed. They fear us because they know that in the near future there will be more boats coming to Gaza, as there are more and more people deciding to boycott Israel every day.

* Thomas Sommer is a research associate with Focus on the Global South and is on board the Freedom Flotilla to Gaza. The flotilla consists of eight boats with 5000 tons of construction and aid materials and hundreds of passengers, including members of parliament and personalities. The government of Israel has announced that they will try to stop the flotilla by any means necessary. 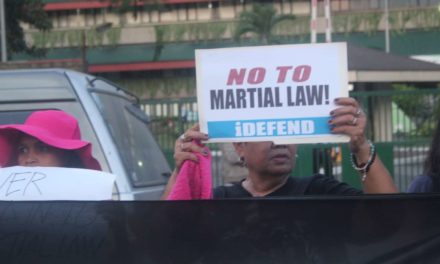 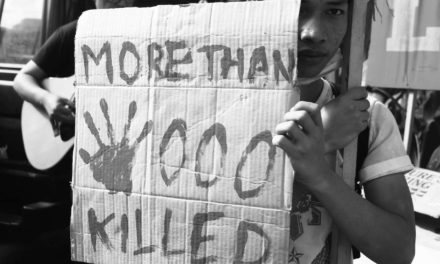