“We succumbed,” lamented a diplomat from Namibia. “We signed on the 12th of December. The pressure was too much. The private sector felt that they would be disproportionately affected. In terms of markets, they would be losing access for beef, grapes, fish and fish products.”

“The political and economic strength of the European Commission [EC] is in itself a threat and a pressure in the negotiations,” he explained on condition of anonymity.

“When negotiating with a stronger partner, you end up only being on the receiving end. Bully tactics are used with the threat ‘you either sign or you don’t have the market’,” he said.

Up to the last moment, Namibia’s government had tried to resist the pressures from both their own private sector and the EU. Until late last week, trade minister Immanuel Ngatjizeko had categorically stated that the demands the EPA placed on Namibia were “not acceptable”.

He insisted that the EPA should be helping with “regional integration and not to disintegrate” the region.

“We made a lot of mistakes,” the diplomat told IPS. “There was no proper coordination amongst the African, Caribbean and Pacific (ACP) countries. The EC has successfully fragmented the ACP, not only in terms of regions, but also within regions.”

The Southern African Development Community (SADC) consists of 15 countries. “While we used to get EU development aid for the region as a whole, now only seven SADC countries (those party to the SADC EPA) will get development aid that is related to the EPAs. This will have ramifications.”

The intra-SADC free trade area is also supposed to be formalized by 2008. How this will play out, with some countries being signatories to the EPAs while a country such as Angola chose not to sign the EPA, remains to be seen.

The Namibian diplomat was quick to add that whilst the country had signed the interim EPA on December 12, it had done so with explicit reservations on certain clauses. “If these concerns are not satisfactorily addressed in the next phase of negotiations, then we can say that we are not in a position to ratify the final agreement and opt out. But in the meantime, we need to do other things, such as finding alternative markets.”

One of these clauses restricts local content requirements in the manufacturing sector. In order to support local industries, Namibia does not want to abolish any legislation that requires investors to use locally produced inputs. Another clause deals with the freezing of export taxes. The EC does not want ACP countries to put in place export taxes. Namibia, however, wants the freedom to use export taxes to discourage the export of raw materials and to encourage local industries to add value to their products before export.

The EC has asked SADC countries to provide it with the same level of market access SADC gives to other significant trade partners. SADC is currently negotiating free trade agreements with India and with the MERCOSUR. MERCOSUR is the Southern Common Market trade area which includes Brazil, Paraguay, Argentina and Uruguay.

If more favourable terms of market access are provided in these and other future trade agreements, the same level of liberalization will have to be extended to the European Union (EU).

The SADC EPA also states that goods entering any one of the SADC EPA signatories should be allowed to move freely to the other signatory countries. However, SADC has yet to formalize its own regional customs union. There are still issues to be sorted out internally.

In contrast to countries which have caved in and signed the interim EPAs, Senegal in West Africa remains steadfastly opposed to the EPAs. An expert from Senegal, who declined to be named, commented on President Abdoulaye Wade’s firm stance taken at the Africa-EU Summit in Lisbon earlier this week.

“He was simply reflecting the national position. The private sector, civil society, parliament and the opposition are all opposed to the EPAs. To have an EPA right now will create a lot of problems for our economy. It will open our markets to products from the EU, some of which are subsidized,” said the Senegalese trade expert.

“Senegal is a least developed country. The industry and agricultural sectors are not ready to compete with the EU on a level playing field. In the next phase of EPA negotiations, we would also have to bring in investment, competition and government procurement, issues which have been rejected at the WTO (World Trade Organisation).

“So the EPAs are WTO-plus. On the other side, in development cooperation, we are not sure that what is on the table can offset any negative liberalization impact,” said the expert.

Of these, Cote d’Ivoire is the only country which has signed the interim EPA in an attempt to safeguard its banana exports to the EU. The country is the main economic powerhouse within WAMU, accounting for 40 percent of the union’s gross domestic product.

According to the Senegalese expert, “Cote d’Ivoire’s signing of the interim EPA will definitely have an impact on WAMU.” Given the high level of economic integration in that region, EU products flowing into Cote d’Ivoire can easily find their way into the other WAMU countries.

“I don’t think they (the EU) did an impact assessment on regional integration,” he said.

He also underscored the tensions the EPA negotiations have created for the WTO negotiations. “They have put the LDCs (least developed countries) in a very bad position in the WTO. Since the 2005 Hong Kong ministerial meeting, LDCs have asked for duty-free and quota-free market access to all developed countries.

“Under the EPA, the duty-free and quota-free market access is reciprocal. Now other countries will say, ‘You have given this to the EU, now you will also have to give me something in return’,” he said.

“So there are many unanswered questions and a lot of uncertainty,” he concluded.

Kenya has also signed an EPA, together with others from the East African Community. A trade diplomat from Nairobi, alluding to the threats the EPAs pose for Africa, summed the position up in the following way: “They say love is blind. This must be real love because we are going along without knowing where we are going.”

According to Ezekiel Mpapale of the Initiatives for Community and Enterprise Development, “One of the things we are doing is to make sure that Dr Mukhisa Kituyi (the current trade and industry minister) is not re-elected. We think he has betrayed us Kenyans.”

* Aileen Kwa is an independent trade policy consultant. Her main activities include research, writing and training on trade and alternative economic policies. She is co-author of ‘Behind the Scenes at the WTO’, and author of ‘Rethinking the Trading System’. She is currently on leave from Focus on the Global South. This article was first published by Inter Press Service, IPS. 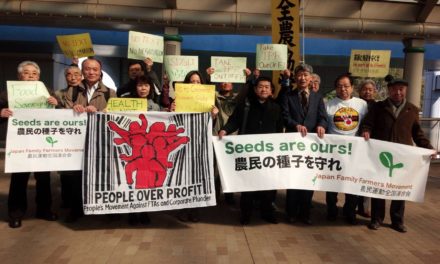