Focus o­n the Global South, 30 July 2004
GENEVA, 30 July 2004: The trade liberalization framework presented to the WTO General Council today is a betrayal of the world’s poor, according to the Asian trade policy research NGO, Focus o­n the Global South.
Speaking in Geneva today, their senior trade analyst Aileen Kwa said that the current negotiations are being used by the rich industrialized countries – especially the US and the EU – to force open developing country markets and to hide their own massive agricultural subsidies.
"If the proposed framework is implemented, the inevitable result will be deindustrialization of the developing world and the end of small-scale farming," said Kwa. "Millions of workers will lose their jobs and millions of farmers will lose their livelihoods."
Agriculture is the key to sustainable development for many developing countries, yet this is where the rich countries are refusing to make any concessions. The proposed framework includes an intricate mechanism to accommodate the US’ and the EU’s very high levels of agricultural subsidies while putting in place a new tariff formula to open developing countries’ agricultural markets.
"Under these new rules o­n agriculture, dumping will continue and even increase," said Kwa, who has been monitoring WTO since it was established in 1995.
At the same time, under the guise of "special and differential treatment" developing countries are being told to reduce support to their farmers. "This is terribly unfair. The EU and the US provide hundreds of billions of dollars in subsidies to their farmers, yet they are asking countries such as India – which gives just $6 billion in domestic support to 670 million farmers — to reduce this even further," said Kwa.
Industrial tariffs is also a key area for developing countries yet the draft framework pays scant attention to their demands and simply regurgitates the so-called Derbez text which was roundly rejected by them in Cancun last year. The assessment of most developing countries is that the proposals are a fast-track to deindustrialization because they "lock-in" their already low industrial tariffs thus limiting the options for future industrial policy.
Kwa says that the demands and concerns of the developing countries have been virtually ignored.
"The text is anti-development and is a betrayal to the world’s poor. Under the guise of fair rules, the WTO – yet again – is putting in place rules protecting the interests of the strong. We call o­n governments to drop the text. If they don’t the consequences will be catastrophic for the poor, "said Kwa.
The executive director of Focus o­n the Global South, Dr Walden Bello, added from Manila "The developing countries have waited nearly 10 years for the trade superpowers that dominate the WTO to show sensitivity to their efforts to change global trade from being an instrument of their domination to serving as a mechanism to advance their economic development. For their patience, they have been rewarded with a succession of anti-development proposals. It is time developing countries actively explore and create other trade mechanisms to make development and trade complementary.
"Development is a goal that can no longer be pursued within the WTO," he said.
Contact:
Aileen Kwa
Focus o­n the Global South
Tel: +41 79 3713774
Nicola Bullard
Focus o­n the Global South
Tel: +33 670454404 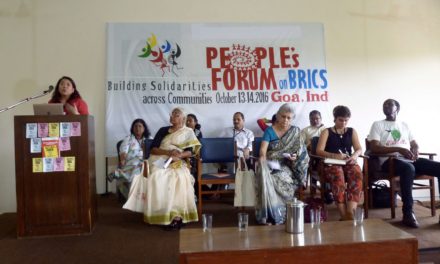 The Rise of Chinese TNCs, BRICS, and Current Global Challenges