Over thirty events directly related to the People’s Summit on APEC took place the week of November 17-24. Activities ranged from conferences, workshops, plenaries, press briefings, films, rallies, and mock tribunals. The summit was what one might describe as a loose confederation of events and activities logistically supervised by a central secretariat with opening and closing plenaries to unify the diverse spectrum of participants and issues.

The Youth Forum on APEC and the Second International Women’s Conference Against APEC kicked off official PopSum ’97. Youths from Canada and the APEC region gathered to discuss issues from environment to indigenous peoples, to corporate rule with an emphasis on youth participation and activism. The Second International Women’s Conference with over 500 delegates took a strong stance in opposition to APEC opening with discussion on women and labour, women and human rights, women and the environment, and gender perspectives of the trade agenda.

The grand opening plenary of the People’s Summit proper rang with voices of solidarity and defiance. Among others, Bob White, president of the Canadian Labour Congress, Jose Ramos Horta, East Timorese Nobel Laureate, and Maude Barlow, national chairperson for the Council of Canadians addressed the human impacts of trade and globalisation. These human and social impacts, they underlined, are completely absent from the official APEC agenda.

From there, a flurry of issue workshops and events ensued over the next week. They included forums on research and education, sustainability, the corporate agenda, human rights, the financial crisis, the arms trade, labour rights, and poverty.

The sustainability forum looked at aquaculture and fisheries, food security, sustainable cities, forestry, and mining as related to APEC’s free trade and liberalisation agenda. Calls for large scale consumer campaigns, reclaiming control of food production, and other strategies were discussed.

The Public Education and Research Forum explored how to strengthen progressive research networks. Participants articulated their commitment to developing an international network that can respond to the needs of the grassroots movements adding synergy to global, regional, national and local movements across issues sectors and national borders.

The human rights forum used dramatic theatre and moderated discussion to explore concrete instances of human rights violations in APEC countries including places such as East Timor, China, and Indonesia. A mock trial tried eighteen APEC leaders for trials against humanity. A moderated discussion followed on the universality of human rights and linkages between trade and human rights. The forum on Indonesia’s experience discussed similar issues within the context of that country’s political system under the dictatorship of President Suharto.

The corporate agenda organised by the Council of Canadians addressed the increasing power of corporations and the roll back of state power. Speakers explained that transnationals are the real agenda setters in APEC and as such, are unaccountable and opaque. In addition, the drive for maximum profit often clashes with the preservation of the environment, human rights and labour rights. Participants declared that globalisation is not inevitable, as often touted and that the defeat of corporate agendas like the Multi-lateral Agreement on Investment (MAI) will demonstrate this fact.

The forum on the arms trade looked at the local and national arms transfer policy, as well as the increasing flow of conventional weapons from the western nations to Asia Pacific. While discussing the regional perspective, panellists also talked about personal experiences from East Timor, the Philippines, and the United Kingdom. The local based organisers “End the arms race” also launched a video at the session that details the largest arms show in the Asia Pacific, which takes place annually near Vancouver, Canada.

The workshop “People versus Poverty” addressed key obstacles to poverty alleviation, examined policy and offered progressive strategies for action. Discussions heavily emphasised the increasing polarisation of the rich and the poor, the social exclusion of the world’s poor, the need for corporate responsibility, fair taxation, a people-centred approach and more public education.

The Critical Issues forum looked at three areas; the financial crisis in Asia Pacific, APEC in the context of other global trading institutions, and the liberalisation of the agricultural sector and APEC. In the first panel, speakers looked at the Asia’s crisis and explained the roots and problems speculative capital and export oriented growth. The second panel examined APEC as part of a global agenda working in concert with the WTO, ASEAN, ASEM, NAFTA and other initiatives that are largely driven by a US trade agenda. The last panel drew on the experience of Southern participant who recounted their experiences in agricultural liberalisation and the threat against their livelihood.

In the final plenary, delegates from various APEC countries summarised the various fora that had taken place, the issues they had discussed, and subsequent recommendations. From there, they forged a Draft Pre-Ambular Statement which called for united opposition to “corporate-driven globalisation” and the rejection of the “basic philosophy, framework and assumptions of the model of free trade and trade liberalisation embraced by the APEC agenda”

There is no doubt the presence of people opposing APEC had impact. The Asia’s economies were in shambles gave an “I-told-you-so” resonance to APEC critics who, since the institution’s inception, had warned that the economic models of many Asian economies were unsustainable. The Canadian government had even financially supported the PopSum â€˜97 activities and indication that at least the hosting government had some inkling of the issues being raised. During the conference, the Indonesian government declared that action would be taken against those people who spoke out against President Suharto, a measure of how serious the problems in Indonesia are today, and how sensitive the Indonesia authorities are to criticism.

And the demonstration at the University of British Columbia led to 48 arrests and allegations of police brutality. A large protest march proceeded peacefully, as some 4500 strong took to the streets in downtown Vancouver calling for an end to APEC’s business-only agenda. The rallies and meetings received widespread local and national press coverage, and some international press. In some instances, one would have found difficulty distinguishing the two summits. One Vancouver Sun headline read “APEC nations asked to make people a priority,” the next column’s headline read “Free market is destroying lives.” The first story was about PopSum, the second a quote from Malaysian Prime Minister Mahathir Mohamad.

And as people look forward to APEC ’98 questions will arise on how Mahathir will react to popular critiques of a business-driven free trade agenda when he hosts the APEC Leader’s Summit next year. While only time will tell his moves, the progressive side has grown yet again in its fifth parallel NGO APEC conference. Malaysia ’98, full steam ahead. 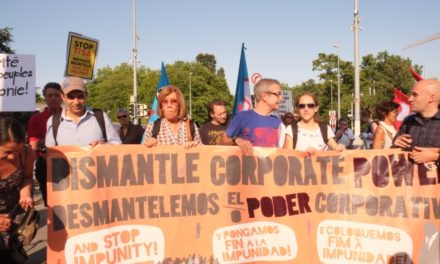