There is something surreal about the ongoing World Trade Organization talks in Geneva , which aim at coming up with a new agreement to bring down tariffs in order to expand world trade and resuscitate global growth. In the face of the looming specter of climate change, these negotiations amount to arguing over the arrangement of the deck chairs while the Titanic is sinking.

Indeed, one of the most important steps in the struggle to come up with a viable strategy to deal with climate change would be the derailment of the so-called “Doha Round.”

Global trade is carried out with transportation that is heavily dependent on fossil fuels. It is estimated that about 60 per cent of the world’s use of oil goes to transportation activities which are more than 95 per cent dependent on fossil fuels. An OECD study estimated that the global transport sector accounts for 20-25 per cent of carbon emissions, with some 66 per cent of this figure accounted for by emissions in the industrialized countries.

From the point of view of environmental sustainability, global trade has become deeply dysfunctional. Take agricultural trade. As the International Forum on Globalization has pointed out, the average plate of food eaten in Western industrial food-importing nations is likely to have traveled fifteen hundred miles from its source. Long-distance travel contributes to the absurd situation wherein “three times more food is used to produce food in the industrial agricultural model than is derived in consuming it.”

The WTO has been a central factor in increasing carbon emissions from transport. A study by the OECD done in the mid-nineties estimated that by 2004, the year marking the full implementation of free-trade commitments under the WTO’s Uruguay Round, there would have been an increase in the transport of internationally traded goods by 70 per cent over 1992 levels. This figure, notes the New Economics Foundation, “would make a mockery” of the Kyoto Protocol’s mandatory emissions reduction targets for the industrialized countries.

Transportation: More Fossil Intensive than Ever

Ocean shipping accounts for nearly 80 per cent of the world’s international trade in goods. The fuel commonly used by ships is a mixture of diesel and low-quality oil known as “Bunker C,” which has high levels of carbon and sulfur. As Jerry Mander and Simon Retallack point out, “If not consumed by ships, it would otherwise be considered a waste product.”

Aviation, which has the highest growth rate as a mode of transport, is also the fastest growing source of greenhouse gas emissions, with its consumption of fuel expected to rise by 65 per cent from 1990 levels by 2010, according to one study cited by the New Economics Foundation.Other estimates are more pessimistic, with the Intergovernmental Panel on Climate Change (IPCC) suggesting that fuel consumption by civil aviation is going up at the rate of three per cent a year and could rise by nearly 350 per cent from 1992 levels by 2050. Note Mander and Retallack: “Each ton of freight moved by plane uses forty nine times as much energy per kilometer as when it’s moved by ship….A two minute takeoff by a 747 is equal to 2.4 million lawn mowers running for twenty minutes.” In support of trade expansion and global economic growth, authorities have by and large not taxed aviation fuel as well as marine bunker fuel, which now account for 20 per cent of all emissions in the transport sector.

Along with fossil-fuel-intensive air transport, fossil-fuel-intensive road transport has also been favored by the expansion of world trade, instead of modes with less emission intensities like rail and marine traffic. In the European Union, for instance, the focus on building up a road transport network led an OECD study to comment that “the way in which the EU liberalization policy has been implemented has favored the less environment-friendly modes and accelerated the decline of rail and inland waterways.”

Decoupling Growth and Energy: a Panacea

There has been talk about decoupling trade and growth from energy or shifting from fossil fuels to other, less carbon-intensive energy sources. The reality is that the other energy sources being seriously considered are either dangerous, like nuclear power; with deleterious side-effects, like biofuel’s negative impact on food production; or science fiction as this stage, like carbon sequestration and storage technology. For the foreseeable future, trade expansion and global growth will fall in line with their historical trajectory of being correlated with increased greenhouse gas emissions.

A sharp U-turn in consumption and growth in the developed countries and a significant decrease in global trade are unavoidable if we are to have a viable strategy against climate change. This will set the stage for a reduction in greenhouse gas emissions, including from the energy-intensive transportation sector. The outcome of the Doha negotiations will determine whether free trade will intensify or lose momentum. A successful conclusion to Doha will bring us closer to uncontrollable climate change. It will continue what the New Economics Foundation describes as “free trade’s free ride on the global climate.”

A derailment of Doha will not be a sufficient condition to formulate a strategy to contain climate change, but given the likely negative ecological consequences of a successful deal, it is a necessary condition. 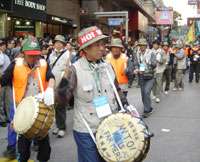