Climate Space: What went wrong in the Global Climate Negotiations?

In the last 20 years, the greenhouse gas (GHG) emissions in the world have, instead of declining, increased, by more than a third. In 1990, GHG emissions were 37 Gigatons (Gt) of CO2e[1]. In 2010, they surpassed 50 GtCO2e[2]. At this rate, if business-as-usual continues, global emissions can reach 58 GtCO2e by 2020, which would be a catastrophe for humanity and nature.

How much will they decrease with the agreements of Cancun, Durban and Doha?

Following the current scenario, the agreements will only succeed to decrease GHG emissions to 57 GtCO2e by 2020. This means that with the UNFCCC outcomes, projected emissions will only be 1 GtCO2e lower than the business-as-usual level. In other words, global emissions will, instead of decreasing, increase by 7Gt CO2e annually until 2020.[3]

Why are humanity and nature in such a very bad situation?

During the past few years, climate justice activists from all over the world have developed several initiatives to try to avoid exactly this disaster. Now is the time to rethink and assess what went wrong in order to find ways to overcome this situation. This is the purpose of the Climate Space at the World Social Forum in Tunisia this March 2013 and the purpose of this paper is just to kick off the debate on this issue.

The idea is to begin the discussion in order to hear the opinions of many that will not be able to come to Tunisia in March. The purpose is to invite you to comment on this paper in http://climatespace2013.wordpress.com orhttp://www.facebook.com/ClimateSpace2013 or email to [email protected]

We have classified some proposed explanations in three big groups: a) campaign, b) governments and negotiations and c) systemic.

Many of these bullet points are meant simply to push the debate forward. For sure several aspects are missing and the interconnection between them have to be developed. An evaluation of what has happened is key to rethink our strategies and build a common action plan.

(Next living paper: how to overcome this situation?)

[1] CO2e: “Carbon dioxide equivalents” is a unit of measurement that allows the effect of different greenhouse gases and other factors to be compared using carbon dioxide as a standard unit for reference.

[3] “If countries implement their lower-ambition pledges and are subject to “lenient” accounting rules, then the median estimate of annual GHG emissions in 2020 is 57 GtCO2e…” UNEP, 2012 Emissions Gap Report

[4] “Emission scenarios analyzed in this report and consistent with a “likely” chance of meeting the 2°C target have a peak before 2020, and have emission levels in 2020 of about 44 GtCO2e…” UNEP, 2012 Emissions Gap Report

[5] One-third of carbon dioxide emissions associated with the goods and services consumed in developed countries are actually being emitted outside the borders of those nations, mostly in the developing world. 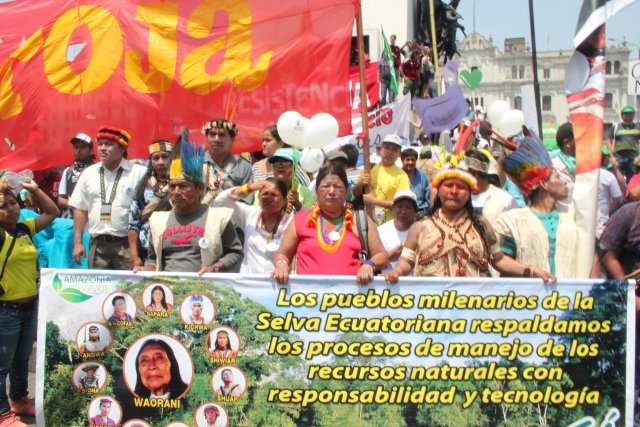 Time to Take Power from the Polluters: Lima Failed to Deliver Real Solutions to the Climate Crisis