We the undersigned civil society organizations are concerned that the positions taken by major developed countries at the Hong Kong Ministerial conference are undermining development interests.
We are outraged by how the developed countries, particularly the United States and the European Union, are trying to use the Ministerial to aggressively push forward their agenda to open the markets in developing countries for the interests of their corporations.
At the same time the major developed countries are not making meaningful concessions to stop the dumping of their agricultural products in developing countries. This would be a very bad deal for development and no deal in Hong Kong is better than a bad deal.

The WTO rules have perpetuated an unfair trading system which favour rich countries and their corporations, while laying developing countries open to ever more pressures to liberalise when their farmers and firms are not in a position to compete in the global economy. This is because the rules are unfair, and because the local firms are too weak to face the onslaught of giant foreign firms.

The results of the unfair trading system include the loss of livelihoods and incomes of small farmers, loss of jobs due to de-industrialisation in many countries, continued obstacles to access to markets in rich countries and continuous decline in commodity prices and the poverty that is linked to that. Particularly affected are women in farming and working communities in developing countries.

The Hong Kong Ministerial meeting, coming at a strategically important moment in the Doha negotiations, might have had the potential to correct some of the imbalances and turn the corner towards development. But it looks as if the potential for doing something positive has faded or disappeared.

To make matters worse, attempts are also being made by the major developed countries to offset the embarrassment of not achieving progress in modalities, by putting on a “spin” that the developing countries, or at least the LDCs, are getting some benefits in advance through a “development package.” This package looks unlikely to contain any real benefits of significance to developing countries, some of them containing promises of aid which is in the form of loans. This is a “face saving” exercise to disguise the fact that the Doha negotiations have not lived up to their “development” name but instead have taken an anti-development turn.
We therefore demand that the major developed countries:
If there is failure in Hong Kong, this will be because developed countries have not shown willingness to deliver on the above demands and it will have to be these countries that have to take responsibility for the failure of the WTO once again to make the necessary changes to the unequal world trading regime. In any case, the developing countries should not be asked once again to sacrifice their development by accepting the inadequate offers and extreme demands of developed countries. We are of the view that no deal in Hong Kong is better then a bad deal.
Endorsed By:

15.  Focus on the Global South

20.  Friends of the Earth, Malaysia

21.  Friends of the Earth, Germany 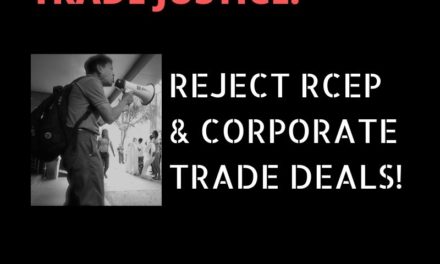