“In 20 years China has achieved economic results that took a century to attain in the west. But we have also concentrated a century’s worth of environmental issues in those 20 years”. These words are not coming from China bashers, it is from an essay On Socialist Ecological Civilisation, which was written in 2006 by the deputy director of China’s State Environmental Protection Administration Pan Yue. China’s ability to attract foreign direct investments or FDI has been impressive. It has been regularly featured since 1992 as one of the top three FDI destinations. As the manufacturing center of the world and a world leader in GDP growth and foreign investment, China’s growth model is increasingly criticized by Chinese and foreign development experts for the environmental and social risks that it produced.

Until 1992, China was still an oil exporting country. Its oil consumption increased by 100% from 1990 to 2001, which is the same period that it started to attract huge foreign investments. Domestic oil production is slowing since 1995 due to decreasing oil reserves. According to Chinese experts, if the current rate of consumption remains constant, China’s oil reserves will be depleted in 14 years. China’s 2007 oil import last year reached 136 million tons, accounting for six percent of the total world trade volume of crude oil, this is about one third of that of the US (1). Oil imports are expected to double by 2010. China consumed 2.22 billion tons of standard coal equivalent in 2007 with the output of non-renewable energy reaching 2.06 billion tons (2).

As the world’s fourth largest economy and third largest trading country, China accounted for approximately 5% of world GDP and had recently graduated in status to a middle-income country (3). Beijing is also emerging as a key global aid donor. In terms of production,China supplied more than one-third of the world’s steel, half of its cement, and about a third of its aluminum.

China is now enjoying trade surpluses with the United States, Japan and the European Union. It is now also the biggest bilateral trade partner of the three. China is also becoming a huge capital exporter. According to the World Bank 2007 Report, its current account surplus is around $378 B or 11.9% of its GDP. It is expected that its current account surplus will be the biggest in the world by the end of this year – as big as the surpluses of Germany and Japan combined.

China’s achievements in poverty reduction from the post-Mao Zedong era, in terms of both scope and speed, were impressive; about 400 million people had been lifted from poverty. The standard of living for many Chinese was improving, and this led to a widespread optimism that the government’s goal of achieving an overall well-off, or Xiaokang4, society, was possible in the near future.

The Costs of Growth

The figures that illustrated China’s remarkable economic achievements, however, conceal huge and outstanding challenges that, if neglected, could jeopardize those very same gains. Many local and foreign-development analysts agree that China’s unsustainable and reckless approach to growth was putting the country and the world on the brink of environmental catastrophe. China was already coping with limited natural resources that were fast disappearing. In addition, not everyone was sharing the benefits of growth-about 135 million people, or one-tenth of the population, still lived below the international absolute poverty line of $1 per day (5). There was a huge inequality between the urban and rural population, as well as between the poor and the rich. The increasing number of protests (termed mass incidents in China) was attributed to both environmental causes and experiences of injustice. If these social problems remained, it could imperil the “harmonious development,” or Hexie Fazhan, project of the government and eventually erode the Communist Party of China’s continued monopoly of political power.

Chinese scholars blame rapid economic growth and urbanization for its Increasing environmental problems. Cultivated land is disappearing as the number of cities increase. In the past 20 years urbanization had claimed 6,475,000 ha (about 16 million ac) of farmland. Each year, an average of 767.42 square kilometres is built on, with this figure growing at an average of 5.76% every year (6). The country’s capital Beijing expands by about 20 square kilometres per year. To compensate, woodlands, grasslands and the seas were reclaimed, which is producing a huge transformation in the ecosystems.

The UN 2006 Human Development Report cited China’s worsening water pollution and its failure to restrict heavy polluters. More than 300 million people lacked access to clean drinking water (7). About 60% of the water in China’s seven major river systems was classified as being unsuitable for human contact, and more than one-third of industrial wastewater and two-thirds of municipal wastewater were released into waterways without any treatment. China had about 7% of the world’s water resources and roughly 20% of its population. In addition, this supply was severely regionally imbalanced-about four-fifths of China’s water was situated in the southern part of the country (8). A total of 60% of China’s 669 cities face water scarcity, and of these, 110 face serious water shortages.

The Pearl River Delta and Yangtze River delta, two regions well developed owing to recent export-oriented growth, suffered from extensive contamination from heavy-metal and persistent organic pollutants. The pollutants emanated from industries outsourced from the developed countries and electronic wastes that were illegally imported from the U.S. According to an investigation of official records conducted by the Institute of Public and Environmental Affairs (IPE), a domestic environmental nongovernmental organization, 34 multinational corporations (MNCs) with operations in China had violated water-pollution-control guidelines. These MNCs included PepsiCo, Inc., Panasonic Battery Co., and Foster’s Group Ltd. The IPE’s data were based on reports by government bodies at local and national levels (9).

Among the environmental costs of China’s economic growth, the most serious and apparent are those caused by pollution. China relied on coal for 70% of its energy needs. More than 300,000 premature deaths annually were attributed to airborne pollution. The changing lifestyle of the increasing number of middle-class families also contributed to the problem. In Beijing alone, 1,000 new cars were added to the roads every day. Seven of the 10 most polluted cities in the world were located in China. Emissions continue to increase as treatment for pollutants remain inadequate. In the last couple of years environmental protection mechanisms were put in place but those are still limited in scope.

China is beginning to realize, however, that its growth path was not cost-free. According to the State Environmental Protection Administration and the World Bank, air and water pollution was costing China 5.8% of its GDP. Though the Chinese government carried the responsibility for fixing the overwhelming environmental consequences of China’s breakneck growth, help, if offered, from the transnational companies and consumers from industrialized countries that benefited greatly from China’s cheap labour and polluting industries could also be utilized in the challenging cleanup task.

When the Chinese government in 2004 began setting targets for reducing energy use and cutting emissions, the idea of adopting a slower growth model and the predictions about the looming environmental disaster were not received with enthusiasm at first. By 2007, however, targets had been established for shifting to renewable energy, for employing energy conservation, and for embracing emission-control schemes. The target was to produce 16% of energy needs from alternative fuels (hydro and other renewable sources) by 2020.

According to Lee, China’s market socialism in its modern form is a predatory, dysfunctional and grossly inefficient system that is enormously wasteful and unsustainable10. China’s model including its growing environmental footprints in other developing countries merely reflects 21st century capitalism, which is characterized by high speed accumulation by the few, dispossession of the majority’s access to resources and voice in the management of resources. Majority of the current analysis about China’s role in the changing global political economy failed to problematize China in the current context of neoliberal globalization system. As long as the institutional and structural forces of globalization is dominated by the exploitative bias for accumulation of natural resources without due regard to people, their livelihood and environment, China and other new actors will continue to go after the natural resources of other developing countries.

Inside China, people are getting more and more concerned about issues related to the problem of widespread inequality. The Gini coefficient (which indicates how inequality has grown in relation to economic growth) had increased in China by 50% since the late 1970s. Less than 1% of Chinese households controlled more than 60% of the country’s wealth.

Does inequality under the current Chinese condition matter? For the Chinese elite, it does. In fact it is a focus of internal political discourses in China in the last few years. The Chinese state should not be underestimated in how it could accommodate and effect change, especially when its legitimacy and long-term survival is concerned. It is aware of the environmental and social impacts of its growth strategies and it understands very well that the growing inequality is incompatible with social stability.

For those in the lower strata of society inequality and the growing pressure to the environment is increasingly felt as the poor people who rely on the environment for their survival and livelihood are increasingly realizing the connection between their poverty and environmental problems. Considering the political environment in China, reports of public protests shows an increasing albeit unorganized questioning of the social conditions. The Chinese people are now clamouring for the fruits of the past decades of growth to be more equitable. The alarm bells that are ringing in various policy circles, the academic community and activist groups emanates from what appears to be China’s duplication of the same social and environmentally destructive economic model already followed by the West.

Many environmental groups are using environment-related issues as mobilizing theme. Some groups are starting to see the need to link their local advocacy with regional and global calls for social justice. Efforts must be made to build future cooperative and solidarity endeavors between Chinese civil society and regional and international social justice movements. If the Chinese government and business interests in Asia and other developing regions are to be moderated by concerns for local people, the environment, human rights, etc., it is of extreme importance that the international voices arguing for this are joined by a constituency of people within China who are also concerned about such principles. What is also urgent is that there should be Chinese civil society participation in the discussion for solutions and building of alternatives

* Dorothy-Grace Guerrero is a Senior Research Associate of Focus on the Global South and coordinates the China programme.

Crisis talk that shone light through the fog 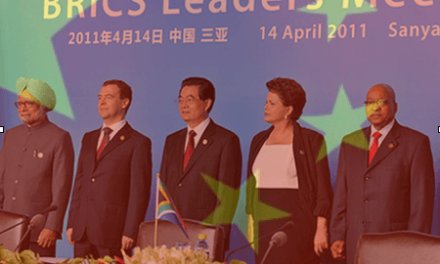 The Rise of China and BRICs: A multipolar world in the making?

China, the WTO and Globalization: Looking Beyond Growth Figures