Anyone getting into a taxi these days may find him/herself in the wrong place, becoming part of a road block somewhere on the main streets of Bangkok and forced to walk the rest of the way. The mass of red clad supporters of the United Front for Democracy against Dictatorship (UDD) has been successful in causing traffic chaos at a level not seen in decades, prompting the Abhisit Vejjajiva government to declare an additional holiday on the Friday before the long Songkran holidays, and more importantly the first day of the ASEAN+3 summit held in Pattaya. Amidst the increasing tension in Bangkok, the one certainty is that there will be no airport blockade this time because it is of the utmost importance to the Red Shirt leaders that their demonstrations are seen as different from those of their yellow-clad opponents, the People’s Alliance for Democracy (PAD), 5 months ago. Not having armed guards like those of the PAD, is a welcome move that may have helped the UDD avoid violent clashes so far.
Since the current government came to power in December 2008 after the court-ordered dissolution of the ruling People Power Party and realignment of coalition parties among the nationally-elected Members of Parliament, the UDD’s demands had been mixed. While announcing democracy as their ultimate goal, they called for the Minister of Foreign Affairs, a known PAD supporter, to step down, at the same time as calling for the dissolution of parliament and new elections on the grounds the new government did not reflect the original will of the people who voted in the last election.
The UDD’s latest demands have gone a step further – calling for the resignation of 3 Privy Councillors, 2 of whom were accused by ex-Prime Minister Thaksin Shinawatra in daily speeches broadcast via video links, of involvement in planning the September 2006 coup d’état that forced him out of office. The Privy Council, appointed by the King, is not supposed to have a political role, but these three have acted beyond their duty, they claim. Their second demand is for Mr Abhisit to step down. This is obviously part of the overall repeated call by Mr Thaksin that Thailand must be rid of the ruling bureaucracy and judiciary elites in order to achieve democracy.
As with the PAD, a movement whose goal is negative (the removal of the government of the day) will attract people with otherwise disparate views, although the UDD leadership has claimed that 60% of their supporters were demanding democracy and only 40% actually wanted the return of Mr Thaksin.  The motivations of the red shirts are varied and difficult to assess. The core are probably Thaksin supporters who feel cheated by the coup and the courts of the person they think best suited to run the country especially in a time of economic crisis (although there is no clear statement of what policies they want to see). Some are motivated by anti-coup principles. Some join the red shirts as an embryonic force for a more democratic society and this would include some with republican sentiments.  And there are all possible permutations among these. But probably a strong common factor is resentment at accusations that the red shirts are paid stooges without the wit to think for themselves or to vote for ‘good’ people.
To people who do believe that much still needs to be done to move Thailand toward genuine democracy, it is still not clear what the UDD has in mind to improve governance of the country and make it more progressive. The third demand was for political reform by ‘democracy activists’ without any mention of people’s participation. What Mr. Thaksin has offered is his vast knowledge and his skills in performing miracles to deliver whatever goods and services people may want. According to him, he can come back to Thailand at any time to do this. No matter how many privy councillors resign, there can hardly be any change if the people have no other opportunity to participate in politics apart from at the polling station. Undoubtedly, this is one of the reasons why many people joined the PAD and the UDD in the streets in the past few years. Unfortunately, as matters stand, this is not a struggle for better opportunities for people’s participation in shaping Thailand’s democratization process, but another elite power struggle between the traditional ruling class and the new capitalist class, which can keep going without a foreseeable end.
The government that is in power must take their commitment to political reform most seriously. They must show their sincerity by providing open spaces for structured constructive debate on political reform where the Reds and Yellows plus the other groups that have not had a chance to voice their views can participate equally and meaningfully. Instead, the government has been putting more efforts in silencing dissenting voices through severe crackdowns on websites.
Mr Abhisit’s government has always insisted publicly on its adherence to the principles of non-violence, tolerance and participation, while upholding the people’s right to protest. Apart from the tolerance it has shown to the UDD and recognition of their rights, there has been nothing else to recommend it on other aspects of the right to participate in politics in general. By doing nothing to move the country on the path to greater democracy and human rights, the government is obviously not a part of the solution to the on-going political conflict.  In this case, perhaps a house dissolution is the only way out after all. 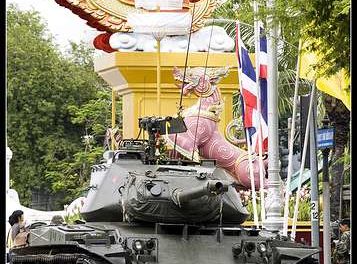 A siamese tragedy : the collapse of democracy in Thailand 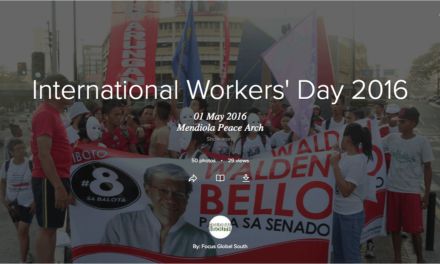