Focus on the Global South Philippines participated in the first Agrarian Reform Youth Congress last weekend, which was attended by about 60 student leaders and grassroots rural youth and labor youth leaders from around the country.

The event was a product of the last two years of engagement and relationship building with the students of the two universities involved (University of the Philippines and Ateneo de Manila), and grassroots groups from the rural youth and labor sectors.

One of the key outcomes was the formation of a National Youth Alliance for Agrarian Reform and Rural Development and there were three working groups-community exposures, education and research, and legislative, which came up with a plan of actions and commitments for the upcoming year (2015-2016).

Below is a write-up of the event from one of the co-organizers:

MANILA, Philippines – Youth leaders coming from different organizations convened in a recent agrarian reform congress last weekend in the University of the Philippines.

Entitled as “Empowering the Youth as Catalysts of Rural Development”, the congress sought to create a network of student leaders in promoting agrarian reform as a youth issue to heighten participation from the younger generation.

Among the delegates were students from University of the Philippines units and Jesuit universities all over the Philippines. Youth leaders and organizers from NGOs, coalitions, and labor groups from Quezon, Bulacan came as well.

Speakers coming from different sectors were invited to provide context and history to the Agrarian Reform and Rural Development (ARRD) struggle. Gender and human rights as relevant issues on agrarian reform were discussed as well.

Towards the end of the congress, the delegates created a working platform which consisted of ideas and strategies that may be adopted by the network for the coming year.

These strategies address the role of the youth in the legislative agenda, exposure with the community and in education and research.

The congress ended with immersions to a farmer community in Rizal, the House of the Representatives, Philippine Center for Investigative Journalism and went to the Department of Agrarian Reform (DAR) to meet some farmers who have camped in the DAR for the days to come.

Equipping the youth with knowledge on the ARRD

The delegates were quick to warm-up as the congress was opened by an inspirational speech from Comm. Percival Cendana of National Youth Commission. Comm. Cendana was the former president of UP Babaylan and UP Student Council.

“AR (Agrarian Reform) and Rural Development is a boring subject. But what exactly is this animal?” asks Romeo Royandoyan, an expert on agriculture and agrarian issues. Omi Royandoyan of the Centro Saka lectured about dialectical historical materialism as a tool of analysis in ARRD.

After two discussions on history and theories, the congress was broken down into groups for a short team building activity.

Among other speakers were the former chairperson of the Akbayan Citizen’s Action Party and board of the Rights-Network, Ric Reyes, discussing experiences from other countries and lessons that the country can learn from them.

Mary Ann Manahan of Focus on the Global South provided a national situationer on ARRD; Carmina Flores-Obanil of 11.11.11 on the gender dimensions of agrarian reform and Max de Mesa, chairperson of the Philippine Alliance of Human Rights Advocates (PAHRA), on land rights as human rights.

Each recounted their experiences during different farmer struggles, gave tips on what to do, and emphasized the dynamism of the youth in pursuing the advocacy.

There were sharing from student and youth leaders as well, recounting their experiences on lobbying, immersion with the community, and in strategizing and promoting the advocacy with the use of social media.

Inspired to design a platform that will be adopted by the national alliance, the congress was broken down to three groups that discussed their participation in the legislative agenda, exposure with the community and in education and research.

Each working group was given time to present their ideas and plans for the coming year.

Congress comes to a close, but doors still open

Groups from various universities have committed to fight in solidarity with the farmers and have promised to contribute energy and skills to the Agrarian Reform and Rural Development struggle.

The congress proved to be more than a lecture in the classroom as some delegates went for an immersion immediately a day after the congress last Monday, May 25.

There were groups who went to Rizal for a farmer visit and picked ripe mangoes, the House of Representatives, the Philippine Center for Investigative Journalism and the Department of Agrarian Reform in the afternoon.

Jenry Celebrado, acting President of Ateneo de Naga Supreme Student Government, says that he strongly believes the need to be more sensitive and compassionate towards the farmers.

“I felt the need for the youth to support and fight for their advocacy. Moreover, I strongly believe that we need to more sensitive and be more compassionate,” says Jenry after meeting the farmers. – Aika Rey/AFARM

The 1st Agrarian Reform Youth Congress was organized by Ateneans for Agrarian Reform Movement (AFARM) and University of the Philippines Student Council (USC) and was co-presented by Focus on the Global South.

The congress was sponsored by the Canadian Catholic Organization for Development and Peace.

Aika Rey is the former promotions and publications head of Ateneans for Agrarian Reform Movement (AFARM) and headed several information campaigns of AFARM such as the KM71 March of the Coco Levy Farmers. She is a published writer and a freelance graphic designer. Her advocacy involves art and multimedia as a tool in promoting good governance. 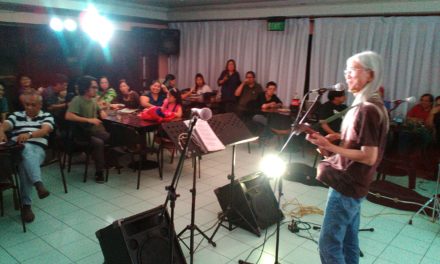 Not just of the Past, Protest Music Kept Alive in the Philippines

The Conditional Cash Transfer debate and the coalition against the poor 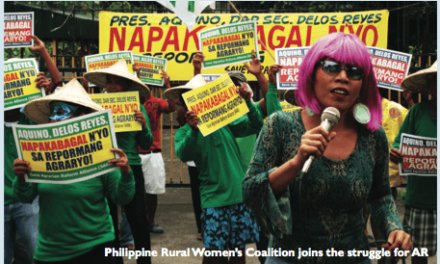 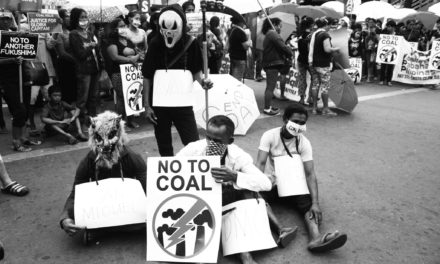